After three pregnancy losses, hear how this dad worked through his emotions and figured out how to best support his wife through the tough times.

This was my response after my wife’s last miscarriage. It wasn’t her first. Nor second. It was her third, one right after the other. Between December 2019 and April 2020, we tried three separate times to conceive, and failed. None of the advice from our well-meaning family and friends did anything to alleviate the pain we felt at the ever-growing possibility we might never be parents.

And me? I failed massively—I failed to properly empathize, grieve or process. My response was to attempt to be the hero of the day: “Buck up. There’s always tomorrow. We can try again.” Needless to say, it created serious tension, especially when the pandemic reared its spongy, spikey head and we were both locked inside. Every day, I watched as my wife silently carried the weight of her losses while putting on a brave countenance for her fourth grade students, stretching that smile beyond the limits of her will.

I acted like a child myself, sheepishly asking from time to time, “how do you feel, Boo?” Her look said it all. “How the f**k do you think I feel?” I’m sure she wanted to say. But she never did. Among her many qualities, my wife is blessedly patient.

If I’m being honest, I wasn’t even genuinely asking. It was a rote cue stemming from the completely helpless feeling of not being able to do a damn thing for her. So I floated like a specter in the background, rubbing her knee as she suddenly and softly sobbed on the couch. Responding, “don’t say that,” whenever she made a morbid joke about her rotted ovaries. If a cute father-daughter scene played on TV, I gasped internally, waiting for one of her commonplace quips like, “that’s something you’ll never get to do.” Promising that none of our new circumstances mattered and that we could seek alternative ways of bringing kids in the house. It did nothing.

Then the day came when she asked why I was having so much trouble talking. “I talk about it,” I said. “No,” she countered. “You just respond to whatever I say. You don’t talk.” She wanted me to be honest about what was obvious to her—that I seemingly felt nothing. The truth was, I was embarrassed by my inability to feel the losses with her same level of intensity. Figuring it was a better time than never, I went for broke. I told her that because none of the three had lasted more than six weeks and I hadn’t really seen growth in her belly, I had a hard time seeing them as beings who had existed. Therefore, it was hard for me to grieve as intensely when we could just try again. (How am I not a candidate for husband and father of the year after that, right?)

In the US, 10 to 25 perent of women experience miscarriage, usually in the first trimester. I know this now because I’ve finally decided to confront this, more than a year on. What you’re reading right now is the product of my trying to empathize, grieve and process. What took me so long? Fear.

Partners: If you’re just like me, the first thing to do is admit you’re scared and lacking resources. Because the next step is tough, and absolutely necessary.

As of penning this, a Google search on “men and miscarriage” prompts the following questions under People Also Ask: “Can a man cause a miscarriage? Can a relationship survive a miscarriage?” Months back, I would have replied “yes” and “no,” respectively. I was convinced about my answer to the first and hoped I was wrong about the second. I didn’t know where to turn for answers—until I stumbled on a video by Jimi Hunt, a mental health coach out of New Zealand.

He had gone through something similar and posted a Tedx Talk called Brutal F**king Honesty. (It’s pretty popular. Go look it up.) I sent him an email at 1 a.m.—something I never do, for fear of bothering people with what I feel are personal problems I should be able to resolve on my own. But Hunt was a massive help. We had a healthy correspondence where I shared exactly what I felt, including my vile, immature response. Having someone else tell me they’ve been in a similar situation was huge. I no longer felt like a soulless man undeserving of being a father.

That’s a touch dramatic, right? Sure. I am unfortunately one of those people who punishes themselves pretty severely, and here I had failed on multiple facets, especially when it came to supporting my wife through three hard losses. Three times! (Insert baseball analogy.)

A couple days later, I told her about my correspondence with Hunt. Her countenance and demeanor immediately shifted. She became more relaxed, more comfortable than I’d seen her in some weeks. “He’s willing to have a virtual conference with both of us if you’re up for it,” I said at the end. “No. I’m good,” she replied. Another quality of hers—ever stoic. “But I do appreciate that you took the time to reach out and talk to someone,” she said. And for the first time in what felt like an eternity, she reached across the bed, placed her head on my chest and embraced me. There were no tears. It was perfectly quiet. We’d shared many silences in those past weeks, but all of them had been screaming with tension and aggravation.

I thought my role as a man was to support her by just listening. Sometimes, that’s just not enough. She didn’t want an ear, she wanted a partner.

The point is, partners: talk. Don’t just listen. Talk. Even when it hurts, even when it’s terrifying or potentially isolating. Don’t just talk to your wife, either. I’d recommend a complete stranger. Find your own Jimi Hunt (or Jimi Hunt himself).

A couple months back, my wife bought a bonsai tree to commemorate those we’ve now dubbed “The Bonsai Three.” I water it like crazy while the Miami weather usurps my best efforts. The three sit there by the window, dry as a bucket of sand, but surviving.

My wife is now pregnant and due any day, and we’re making plans for baby boy’s arrival. We’re preparing for when he’s old enough to ask about the bonsai and how we’ll tell him its origin story and about his three siblings who definitely existed, however briefly, in time and space. He’ll help shape me into a better partner and husband, and help me understand that I won’t always have the answers, and that’s alright. 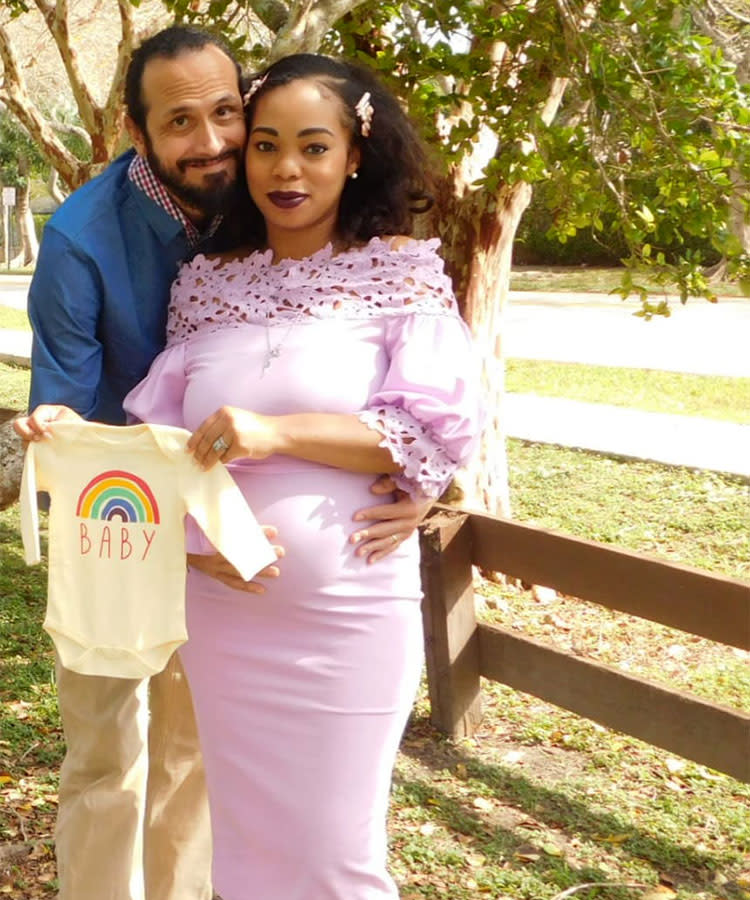 Hector Duarte, Jr. is a writer and educator out of Miami, Florida. His fiction has been published widely online and in print, like the recent anthologies Pa Que Tu Lo Sepas: Stories to Benefit the People of Puerto Rico, and Shotgun Honey Presents Volume 4: Recoil. In September of 2018, Shotgun Honey Books published Duarte’s full-length short story collection Desperate Times Call. You can follow him on Twitter.

Moving Beyond Miscarriage: How to Deal After a Loss

Chrissy Teigen Speaks Out for the First Time Since Pregnancy Loss
Article saved.Go to My Saved Articles
Article removed.