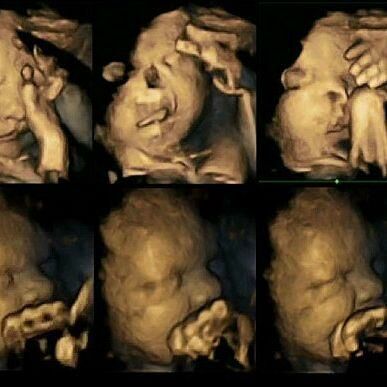 You know you shouldn’t smoke during pregnancy. But now there’s photographic evidence urging you not to.

Using 4-D ultrasounds, researchers at Durham and Lancaster universities in the UK found that fetuses of smoking mothers touched themselves and moved their mouths significantly more than the rate typically expected at 24, 28, 32 and 36 weeks. It almost appears they’re grimacing. Since mouth movements and self-touching usually decline as babies gain more control and get closer to birth, this is cause for concern.

Researchers think delayed development of the fetal central nervous system, which controls general and facial movements, may be the source of blame.

Of the 20 babies studied, all were born healthy. And four of the moms who participated in the study smoked an average of 14 cigarettes per day.

"I’m really grateful, they did a good thing, says Nadja Reissland, MD, lead author of the study. “These are special people and they overcame the stigma to help others.”

Reissland is calling for more research to examine the relationship between smoking and fetal development, stressing that this was only a pilot study. Still, smoking during pregnancy has some scary and real risks, like preterm birth, birth defects and SIDS.