The steps you take now are key for a lifetime of wellness.
Save article
ByLiz Kreiger
Contributing Writer
UpdatedMay 2020 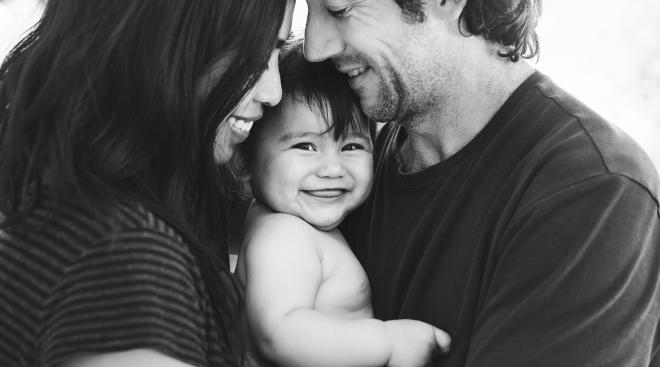 It’s so easy to get caught up in baby’s health right now (are they gaining enough weight? Are they getting enough sleep?) that you lose focus on the future. But because it’s such a crucial time for both body and brain development, it’s important to look at the big picture. There are steps you can take early in baby’s life that will impact your child’s health for years to come. From the importance of tummy time to the benefits of “good” bacteria, here’s what you need to know to give baby a healthy head start.

Baby may not be a big fan of being placed on their tummy at first—in fact, some babies loathe it—but stick with it and know it’s going to help your child grow strong and even avoid a misshapen head (aka known as flat head syndrome). Lack of tummy time can also affect how long it takes for baby to master basic milestones such as head lifting, turning over, sitting up and crawling. So, as soon as you come home from the hospital, make a point to play and interact with baby on their tummy two to three times each day for a short period of time (three to five minutes is all you need), increasing the length as you go. Some parents find that after a nap or a diaper change works best.

Even though baby can’t talk back, you should definitely chat them up as much as possible. That’s because more exposure to you talking—about anything, really—can impact children’s vocabularies and language processing skills later on. In one study, babies whose parents spoke to them the least came out worst in language tests, and at 24 months old, some lagged behind their contemporaries by up to six months. What’s more, the handicap often stayed with the children and influenced how well they did at school over the next six years. Talking to babies helps them grasp the rules and rhythms of language at an early age, and provides a foundation for understanding how the world works.

3. Don’t Freak Out About Germs and Dirt

While no one is saying you should hand baby to someone with the flu, going overboard with cleanliness might actually hurt your little one’s immune system in the long run. There’s mounting evidence that a hyper-sanitized childhood may be partly to blame for the rise in allergies and asthma. Researchers think early exposure to germs can teach an infant’s developing immune system to recognize and fend off the germs later on.

Likewise, studies have found that kids who attend day care—and are therefore exposed to their little buddies’ boogers and other germs—may get more respiratory and ear infections than those cared for at home, but they are less likely to come down with these ailments once they start elementary school. Even bugs that go for the gut can be linked to allergies and asthma. In one study, children who tested positive for H. pylori (a bacterium linked to ulcers that lives in the stomach lining of about half of all people) were less likely to suffer from the itchy skin condition eczema. In another study), the presence of H. pylori in the stomach was linked to a lower risk of childhood asthma.

4. Turn Off the Tube

While it can be tempting to just let Elmo sing the ABCs to distract your teething baby, it’s best to avoid screens until 18 months. Any younger than that, and not only is your child not actually learning anything from watching videos, studies show that doing so could be associated with slower language development, as well as lower scores on tests of cognition and reading readiness. (Exceptions: FaceTime, Skype and other visual phone calls, which foster real connections with loved ones.)

5. Be Proactive About Probiotics

The latest buzzword in boosting childhood immunity: probiotics. These trillions of microscopic organisms inside your gut help your body stay healthy. While older children and adults need diverse gut bacteria in their system to help them digest all kinds of food, infants only have a single food source on the menu for the first six months. So babies just need the key good bacteria B. infantis, which minimizes potentially harmful bacteria—especially those that are linked to a higher risk for conditions like colic, eczema, allergies, obesity and diabetes. But ongoing research from the University of California suggests most babies don’t have enough B. infantis in their gut. Giving baby probiotics may help restore this important bacteria, which in turn can help create a protective environment in baby’s digestive system.

6. Be Smart About Plastics

It seems everyone is talking about plastic these days—especially when products contain BPA (aka the chemical Bisphenol A). Reams of studies have shown its effects on the endocrine functions in animals, which can lead to a host of issues, from interfering with immune function and an increased risk of cancer to behavioral problems later in life. The endocrine system is responsible for hormone regulation: If it isn’t functioning properly, it can cause problems with weight, bone health and energy levels.

Research shows that endocrine disruptors like BPA may pose the greatest risk during prenatal and early postnatal development when organ and neural systems are forming. In 2012 the Food and Drug Administration (FDA) banned the use of BRA in plastic baby bottles, but there are other products to keep an eye out for, particularly pacifiers, toys and teething products. In one study where researchers analyzed 59 teethers, most were found to contain BPA, even if they were labeled “BPA-free” or “nontoxic.” While it can be hard to avoid plastic 100 percent, keep in mind that BPA is more likely to leach out of plastic when its temperature is increased, like when you place items in the microwave.

How to Encourage Healthy Eating Habits from Birth