Heartbreaking Study Finds Baby’s Not Safe in Her High Chair 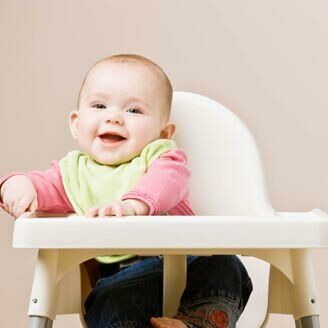 A new study published in Clinical Pediatrics found that more than 9,400 young children are injured falling off their high chairs — and even though high chairs are almost every parents go-to for feeding time seating, they might not be as safe as you think.

For the study, researchers looked at children aged 3 and younger that were treated in emergency rooms in the US. They found that the most common type of injury associated with high chairs was a head injury, followed closely by bumps, bruises and cuts. Researchers also found that the rate of such injuries increased 22 percent from 2003 through 2010. Dr. Gary Smith, the director of the Center for Injury Research and Policy said, “Maybe even more concerning, the rate of head injuries has increased by almost 90 percent between 2003 and 2010, and I think it begs the question, what’s going on?”

The reason for such a dramatic increase? Parents not using high chairs and boosters correctly. When researchers took a closer look, they found that all the injuries were associated with falls, which meant that most children fell as they were climbing into — or standing on — the chair. The big red flag there? It suggests that the chair safety restraint system wasn’t used properly, if at all. Smith said, “We know that over the recent years, millions of chairs have been recalled in the U.S. because of not meeting safety standards. But usually, a very low percentage of recalled products are actually returned.”

Do you think high chairs need to be made safer?