Infants in the Workplace: Would You Sign Up for the Program? 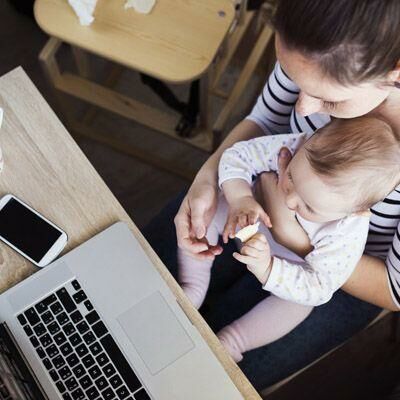 We say it again and again: the 12 weeks of federally-mandated (but not necessarily paid) maternity leave is less than ideal. Some companies have done employees a solid and extended it — most recently Netflix, offering a full year of paid leave. But other companies — about 200 nationwide — are taking a different approach, inviting newborns into the office. And parents seem to love it.

Take the Washington State Department of Health in Olympia, for example. TODAY reports that it recently implemented an " Infants at Work Policy," allowing moms and dads to bring babies between six weeks and six months old to the office. At eight weeks postpartum, Marissa VanHoozer was back at work at the Department of Health. And baby Gavin slept in a bassinet on her desk.

“It’s been overwhelmingly positive. I don’t think I had a single complaint during the entire time that Gavin was here,” VanHoozer told TODAY. “Instead of calling them coworkers, they’ve just become Gavin’s aunties and uncles.”

Skeptical? The  Parenting in the Workplace Institute, which heads up initiatives like the one in Olympia, understands the reservations of coworkers. So they’ve suggested some guidelines:

For smaller companies that can’t quite afford to offer paid leave — but wish to retain employees — it’s certainly a program to think about. Moms (and dads) can spend as much time with baby as possible without worrying about income taking a hit from maternity leave.