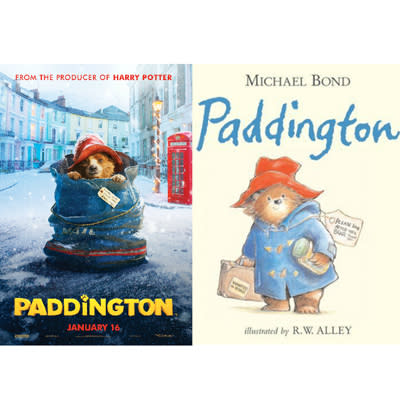 It’s always exciting when a book you loved as a child is adapted for the big screen. This weekend, “ Paddington,” the story of the famous bear who travels to London via Peru, opened in theaters to rave reviews. The film tells the tale of how, after getting lost, Paddington gets taken in by the Brown family. Hilarities ensue as Paddington stumbles through various adventures of adjusting to a new home and life, including a laugh-out-loud bathroom scene.

The movie got us thinking of other films that’ve been adapted for the big screen from beloved children’s books. So if you’re looking for a movie to watch at home after seeing Paddington, here are a few of our favorite book-to-big screen adaptations:

Babe (1995) A little pig transported to a new farm successfully avoids becoming Christmas dinner, befriends a collie and becomes one of the “dogs”, helping to herd sheep. It’s an Academy Award Best Picture nominee and widely-regarded as one of the best family films of all time.

Charlotte’s Web (2006) A charming story where a child’s beloved pig is befriended by other animals at the farm who plot to save him from an unfortunate fate. The live-action tale is voiced by a star-studded cast, including Julia Roberts,  Oprah Winfrey, Reba McEntire and Steve Buscemi.

Curious George (2006) No monkeying around: this is a great first feature film for little kids. George’s precociousness and curiosity get him and The Man in the Yellow Hat (voiced by Will Ferrell) in some sticky — and silly! — situations.

The Lorax (2012) Kids will love this animated adaptation of Dr. Seuss’s environmental cautionary tale. The movie tells the tale of the guardian of the trees and can explain (with the help of characters voiced by Zac Efron and Taylor Swift) why it’s important to take care of nature and the land around us.

Babar: King of Elephants (1999) This wise elephant has been around for generations, and rightfully so. This is the second feature film starring the young elephant, and a great introduction to the character with memorable lessons on kindness and respect.

Stuart Little (1999) Although this comedic tale that steers a bit off course from the original book, kids will love the talking mouse that gets adopted by a human family and has some trouble fitting in with his new parents, brother and a cat.