Why the Hell Does Everyone Want to Smell My Baby?

The odd science behind why everyone wants a whiff of your newborn. 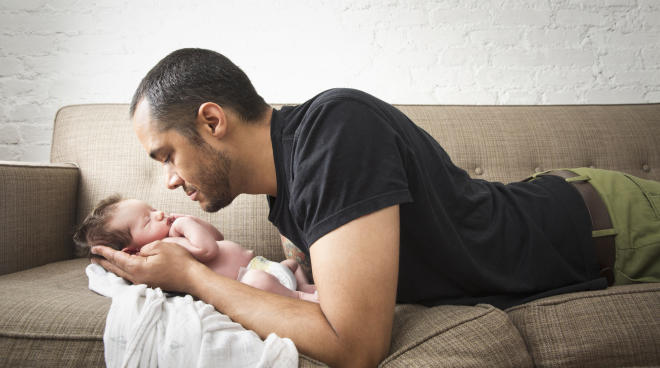 A few weeks after my daughter’s birth, a woman asked to smell her head. My wife and I were a bit weirded out but didn’t see the harm in letting her have a whiff. Granted access, she bent down a few inches from my little girl’s head, breathed deeply, and then glowed with the satisfaction of a stoner who caught the scent of some grade-A kush. It was a strange moment but one to which we — and, certainly many other new parents — have grown accustomed. It’s a universal truth: strangers, relatives, and friends all want a noseful of that new baby smell. But what, really, is the cause of the intoxication?

Smell is a rogue sense. Sound, sight, taste, and touch filter through the thalamus, a region of the brain believed to function like a relay station, routing sensations to other sections. Olfactory receptors, however, bypass that and link directly to the limbic system, a brain structure associated with memory and emotion. It’s why a certain type of perfume makes someone think of their high school love, or that stale Miller Lite is reminiscent of senior year.

In other words, certain smells inspire an immediate, primal response in the brain. And that could perhaps explain why all the folks who inhaled my daughter sniffed their way to a fleeting sense of bliss.

Smell also connects parents to kids. A 2009 study from PLOS One showed that newborns are instinctively drawn to chemical compounds in the breast milk of women who’d recently given birth. In a 1998 study, researchers found that crying infants were calmed and comforted in the presence of a gown recently worn by their mother. The babies also appeared happier around the mom-scented gowns.

It seems like parents harbor a sort of olfactory connection to their children. Multiple studies have indicated mothers can, with surprising accuracy, recognize their children by scent. And a 1998 study found that 12 out of 15 mothers, as well as 11 out of 12 fathers, could correctly identify their child’s amniotic fluid. Mmmm.

I assumed memory and association are what compel people to sniff newborns, but a recent study indicated that new baby smell involves more.

Researchers behind a 2013 study published in Frontiers In Psychology believe that women — mothers in particular — are biologically hardwired to respond to a newborn’s scent. Smelling a baby appears to release dopamine, that feel-good neurotransmitter that fuels the brain’s reward center.

For the study, researchers monitored the brain activity of 30 women who were asked to identify a variety of different scents, some of which were baby smells. Fifteen of the women were mothers; 15 were not. Through thermal imaging, researchers saw that baby smells lit up the reward circuits of all 30 women, but the reaction was stronger in the new mothers.

It’s unclear exactly why the moms responded to the smell more strongly than women without kids. But biologist Johan Lundström, who led the study, told the New York Times, he believes women’s brains are hardwired to be rewarded by smelling newborns as an evolutionary incentive to protect their own children.

He believes that baby smell is caused by the vernix caseosa, the white substance babies are covered in when born. Lundström said that while hospital workers usually wash the vernix caseosa off immediately after delivery, traces could remain in the baby’s hair or the folds of skin.

There’s wonderful logic to the idea that infants are born with a coating that compels their mothers to protect them. Babies are vulnerable, so they come into the world coated in a substance containing a chemical compound that sets off a powerful protective instinct in the person closest to them at birth. And this also lines up with the broad outlines of evolution. Also? It might not be true.

In her 2008 book Scent of Desire, Brown University neuroscientist Rachel Herz wrote that while preferences of smells are subjective and often driven by culture, they can change over time. An example: she said many Asians are averse to the smell of cheese. If they move to Paris and fall in love with the city, however, they could come to love cheese’s smell from positive associations they’ve formed.

Herz contends that smells are meaningless without prior experience to give them context. She doesn’t believe we’re hardwired to react to scents, saying as an example that fundamentally there’s nothing inherently bad about skunk spray or inherently good about a rose.

“Only when it becomes connected to something meaningful does it take on the properties of being liked or disliked, or being able to trigger memories or be able to trigger emotions,” Herz said during an interview with the Brain Science podcast.

So what compelled people to sniff my daughter’s head, as though she was some sort of farmer’s market melon? Memory? Association? A sort of evolutionary trigger? It’s hard to say. But I’m glad that her young, untainted scent made people happy — simple as that. My wife and I smiled and allowed strangers to take a whiff we knew all too soon that new baby smell would be gone.

Plus more from The Bump, Infant Etiquette: