What Happened When I Stopped Listening to Parenting Advice

It turns out things were not as dramatic as they'd once seemed. 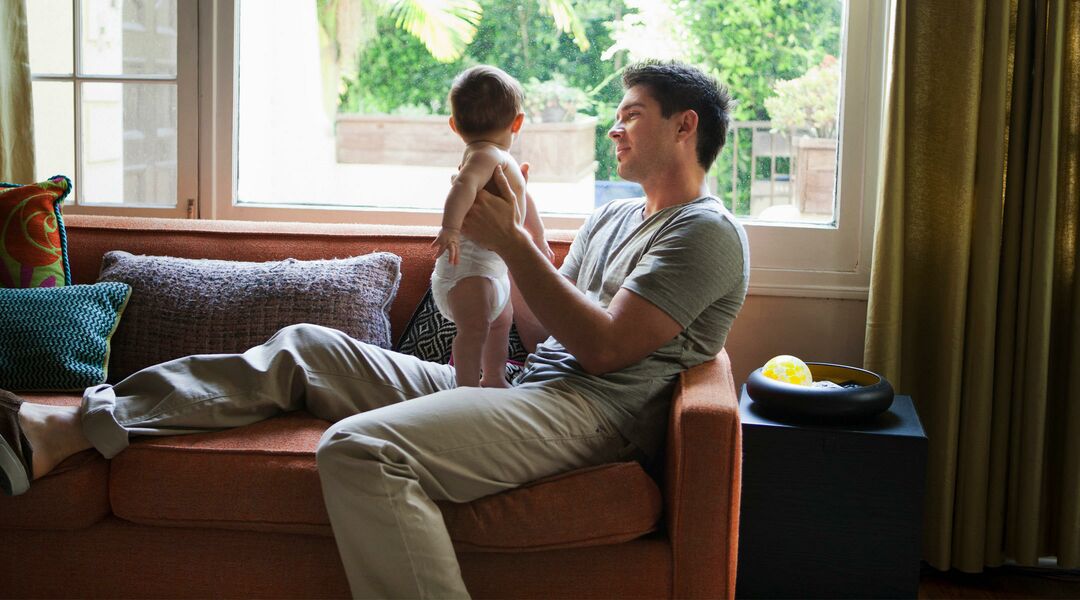 There’s a lot of advice out there about how to raise a baby. There’s so much information, much of it contradictory, that it can be overwhelming for new parents to wade through the ocean of books, websites, and well-meaning friends and relatives, all of whom are certain their way is the correct way.

While experts disagree whether 8 weeks old is too young for a boy to use a chainsaw, we felt it was time the boy learned the arts of lumber-jacking. (This also meant allowing him to drive a snowmobile, but once you start chainsawing, the other safety concerns melt away faster than the polar ice caps in Dick Cheney’s dreams/reality.) Sure, “Big Helmet” want you to make sure your kid is strapped into all kinds of safety gear, but we believe in the old motto “old enough to pee, old enough to cut down a tree.” And so at 56 days old, when the first heavy snowfall of his life occurred, we took Lev out to Central Park to wield a Husqvarna 440 18-inch chainsaw, and cut down one of the park’s mighty oaks.

Let me back up. Before Lev was born, we had read all the “how to” books: The Happiest Baby on the Block. The Baby Whisperer. Bringing Up Bebe (about how the French raise superior babies). The Brazilian Way of Raising Babies. The Russian Way of Raising Babies (spoiler alert — it’s mainly ice and borscht). What to Expect When You’re Expecting. The Contented Little Baby Book. Baby and Child. The Baby Sleep Solution. Your Baby Sucks and You’re Doing It All Wrong.

When I say “we” had read all these books, to be clear about that pronoun, Michelle had read them all, with a pencil and a highlighter, taking notes and memorizing larges swaths of the text and graphics. I had slept with one of the books under my pillow, either because I was hoping the information would soak upward into my brain, or I just wanted my pillow to be higher.

The point is, there’s a huge amount of wildly opposing viewpoints out there about what to do with your innocent little poopie machine. If you Google baby sleep training, you will see books that promise to teach your baby to sleep in seven days and others that explain why you should never sleep train your baby.

Some authors advise routines that control your infant’s life down to the minute, others suggest you let the baby eat and sleep whenever he wants to. Some say you should begin to sleep train at 8 weeks, or 3 months, or 6 months, a year, or not until a your baby weighs a certain amount or starts growing a beard. Some say never let an infant be awake for more than two hours. Others say they should sleep 16 hours a day.

Some say you should bond with them but don’t let them get too spoiled. Some say it’s technically impossible to spoil a newborn. Others say you should spoil them for up to 3 months, and then after that you should suddenly give them a cold shoulder, and leave them alone in their room for long periods of time with no explanation to toughen them up (that’s from the Russian book). Some say adhere to a strict schedule and no matter how much they scream and cry, pay it no mind, buy some good headphones and go about your day.

Some say newborns cry because they are over stimulated, some say it’s because they are bored. Some say to wear your baby on a little baby carrier to bond with them, but other say don’t do that, because they will become overly attached little momma’s boys, but if you do wear the on a baby carrier, you need to make sure it’s an organic one made by milk-faced virgins in the mountains of Peru from the wool of sheep who are also virgins. Whore sheep will ruin your baby.

Some say you should hesitate a few minutes before soothing them when they cry so they learn to self soothe and don’t think they rule the roost, otherwise you will have a mean, bossy baby to deal with. Others say if you don’t come running the instant they cry, they will end up robbing 7Eleven’s by the time they are 15.

Some say make sure they sleep on their back, others say it will make their heads end up shaped like a rotting melon. Others say you should let them sleep with you so they can feel your heartbeat. Others say that will kill your baby.

Some say you must breast feed or they will end up attending a 2-year beachfront community college and drinking wine from a box. The French feed them chocolate and red wine from the age of 2 weeks old and their babies turn out fine.

But pretty much everyone agrees on one thing: never wake a sleeping baby. So that’s what we did today.

It was 7 a.m. and neither of us wanted to wake up, but due to a slight miscommunication, and our confusion from half-following the advice of several different books, we woke up a perfectly sleeping little angel and turned him into Linda Blair in the Exorcist, his head spinning around while projectile spewing.

To be fair, while this was a terrible decision, it was amusing. For once, after he had woken us up so many times, we turned the tables on the little bastard and he looked genuinely confused. He was staring at us with such a mixture of fear, disbelief and shock, that we all laughed about it for a few minutes — well, he actually didn’t laugh that much, he started cursing at us in a language that hasn’t been spoken for a thousand years and staring at us with goat eyes.

We tried bouncing him on the yoga ball, singing to him, purring like cats, turning on a white noise machine, and chanting in Sanskrit. Finally I started a chainsaw, which instantly made him go quiet. He looked at me like, Who is this crazy idiot?

Now to be fair, Michelle did not agree that we should let the baby sleep with or operate a chainsaw. But given the breadth and chaos of opposing views in our library of how to raise a baby lit, I decided it was time to at least add one more method to the maelstrom of opinions. The chainsaw method. It works every time.

Despite everything I have said up to this point, here are three ways to do everything right when it comes to raising a child: