9 Things You Didn’t Know About Being a Gay Dad

Forget what you thought you knew about being a gay parent. (Modern Family isn't reality.) This gay dad tells us like it is.
Save article
ByDan Bucatinsky
UpdatedAug 2020 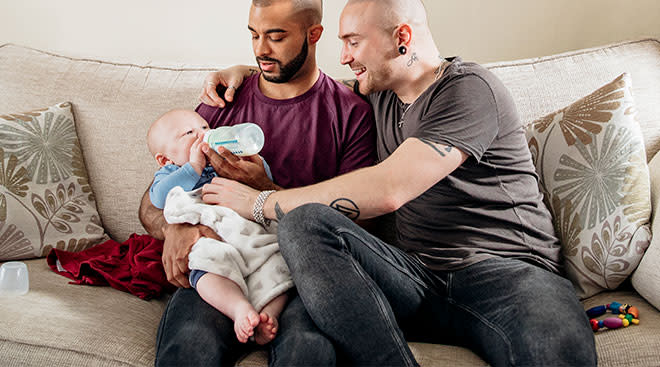 Photo: Getty Images
We have included third party products to help you navigate and enjoy life’s biggest moments. Purchases made through links on this page may earn us a commission.

1. We Don’t Really Like Those Children’s Books About Gay Dads

Gay dads, like all dads, like to cuddle up at bed-time and read the kids a story. But almost every single example of a fairy tale or children’s book involves a traditional family with one mother and one father, or a princess and a prince. And the stories about gay dads? Well, the problem is, they’re about gay dads, and they always say something to the effect of, “Some people have two daddies, and some people have two mommies.” That’s about the extent of creativity in same-sex parent bedtime stories.

Right now, my solution is to read regular books, but change the gender of the characters as I’m reading. But the older the kids get, the harder it is to sell that the bear in the dress who thinks the porridge is too cold is actually another bear dude who likes to cross-dress.

We gay dads love spending time with our kids. And some of us are even outdoorsy. But for me, it’s only when it involves strolling through a crafts fair or flea market. Nope, traditional straight dad activities are not for me. Threading some slimy earthworm onto a hook and sitting for hours on a bug-infested pond waiting for the tug of a fish will just make me lose my patience, and nobody will have any fun.

If gay dads don’t feel like chasing the kids or pushing a swing, we may set out a blanket with a book or an iPad and call that home base. Or—better yet—turn our activities into fun for them: “Hey kids! Daddy needs to shop for shoes! Let’s bring your scooters and helmets and build an obstacle course in the alley behind the store!” Okay, maybe not the best example. But you get the idea.

3. We Give a Lot of Thought to How (and When) We’ll Answer the Question: ‘Daddy, Where Did I Come From?’

Both my kids were part of an “open adoption.” Open adoptions are a wonderful opportunity for a birth mom to decide where her baby will be placed. It’s good to work with a family services agency that will advocate for the birth mom as well as the couple. We found this made everyone feel a lot more comfortable during a process that can, at times, be tense and emotional.

As a result, we learned that how we speak about adoption is so important. It’s good to use the phrase “making an adoption plan” rather than phrases like “giving up” or “giving away” a baby. So regardless of how you became a family, it’s important to talk about adopted kids with a same level of love and respect. And this includes adopted kids that aren’t your own.

4. Moms and Dads Flirt with Us

It’s amazing how much the moms on the school yard like to flirt with the gay dads. Hard to pinpoint the root of the Will & Grace syndrome, except that we have so much in common with so many of the moms. We tend to be nurturers. We can talk endlessly about carpools and the best places for our kids to take gymnastics and Tae Kwon Do. We love to gossip. We’re great listeners. Oh—and we like to sleep with men, but will never sleep with their husbands. Let’s face it. We’re quite possibly the best friends these gals will ever have.

Even more interesting, perhaps, is how much the straight dads like to flirt with us too. Maybe it’s because they’re eager for reassurance or competitive—they like the idea of this whole new demographic on the school yard who may think they’re hot. I often find the dads are just as solicitous of the gay dad attention as the moms.

Gay dads are often faced with the question from uninformed breeders: “which one of you is ‘the mom?’” In traditional families—ones with one mother and one father—each parent takes on certain roles dictated by instinct or evolution or just years of societal imprinting. But let’s face it, there are just some things moms do that dads can’t do, like giving birth and breastfeeding. And maybe this initial bond between babies and their moms leads them to become the Band-Aid supplying, tear-wiping, lunch-making nurturers, while Dads are often relied upon to be the disciplining, rough-housing, shoulder-carrying-through-the zoo protectors. In a home with two dads, both take on both roles, at different times. And while neither of us, as far as I know, had the ability to breastfeed, we developed our nurturing instincts during those crucial bottle-feeding years. Two dads will yin-yang the roles they play in their kids’ lives, see-sawing the “mom” duties and the “dad” duties as necessary.

6. We Get Creative with Rough Housing

Kids love to be tickled and flipped, flown and swung around by their dads. It’s something in their DNA—and in ours. One of our favorite games is “sack of potatoes” where we lift the kids on our backs or around our necks and drag them like sacks, giggling hysterically as we pretend to drop them on “the heap!” In our house, however, the game takes on a certain panache. The kids clasp their hands around Daddy’s neck and I walk around, dragging them from side to side, pretending to wear the latest in super-chunky jewelry. “Like my new necklace everyone? It’s the biggest diamond in the world and it’s called…Eliza!”

7.  We Take Pride in the Morning Makeover

What is it about a “before-and-after” that we gays find so satisfying? Well. Put us in a parental role and we go to town. Our kids wake up their sleepy-eyed, bed-headed selves, and it’s up to us to make their transformation! As long as the kids let us, we’re happy to pick out their clothes, making sure the leggings pick up a hint of some color in the top, and perhaps a sweater-vest over the T-shirt and a pair of skinny jeans for our sons. Very cute. Put-together without looking like we tried too hard. Then there’s a bit of a daddy-brawl over who gets to brush their hair. Let’s face it: We were jealous of our sisters who spent hours brushing their Barbies’ hair. Now it’s our turn!

Women on planes prefer giving advice to gay dads over watching an in-flight movie. Even if you offer to pay. And it stars Julia Roberts. Turbulence will not stop them. Nothing will stop them. Except maybe if one of the dads were to turn into a woman.

9. Other Than This Stuff, We’re Just Like Every Other Kind of Dad

I mean, the diapers smell the same—we may just look a little nicer while we’re changing them.

Dan Bucatinsky is a father of two and author of Does This Baby Make Me Look Straight?: Confessions of a Gay Dad.