Learn what causes temper tantrums and how to deal (without losing your sanity). 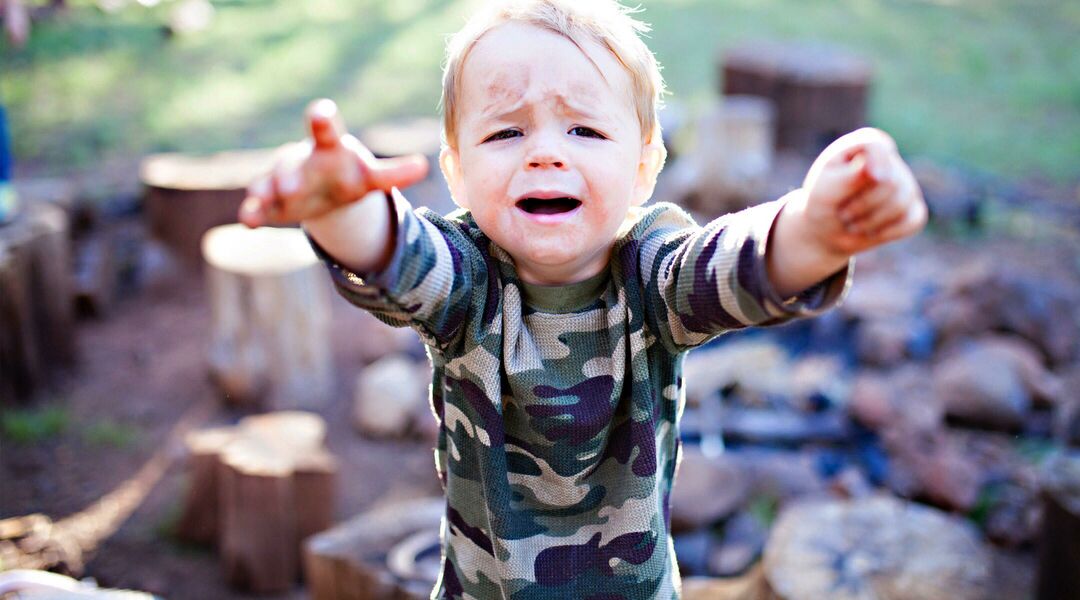 Picture this: You’re heading to the airport for a family vacation, and, not surprisingly, cutting it pretty close on time. But you’re going to make it! As you snake your way through the security line with your not-so-enthusiastic 2-year-old, he starts to whine, wriggle, sink into the floor. You promise a surprise once you’re through. You’ve caught his attention. You’re through, and out comes the sacred lollipop. It’s green. He wanted red. It’s the only one you have. He loses it in the airport, melting into a puddle, screaming and crying. Everyone stares. You scoop him up and run to your gate. End scene.

Sound familiar? If that’s a detailed account of what happens most every day for you—just sub in scenarios like, “she decided she will be the only one to tie her shoes but doesn’t know how,” “he wants to go up the down escalator” or even just “it’s raining”—then you’re just like every other parent with a growing toddler. Fine one minute, a complete mess the next. But there are ways to deal (without losing your sanity!).

We often find ourselves justifying toddler tantrums: Oh, he’s just hungry. Or she skipped her nap this afternoon. But that doesn’t classify exactly why they’re acting out. Toddlers go from happy and chirping to splayed and screaming in zero to 60 not because they can’t get what they want, but because that’s their only mechanism for expressing anger, frustration or distress at this age. Yes, that means tantrums are inevitable. But there’s a right way to handle those outbursts.

First off, what is a tantrum? “Tantrums are discrete temper outbursts communicating frustration, anger and distress,” explains Stephanie M. Wagner, PhD, clinical assistant professor at the department of child and adolescent psychiatry at NYU Langone’s Child Study Center. “Tantrums can include stomping, yelling, crying, aggression and/or destructive behaviors.” Wagner says that roughly 75 percent of children will have tantrums by the age of 2. (See, you’re not alone!)

But how do we go from wanting the red versus green lollipop to collapsing into a puddle on the floor? It has a lot to do with timing. “Tantrums occur around the time there are major advances in skills including walking and speaking,” Wagner says. And these new skills set the stage for meltdowns. “For instance, as toddlers can move around more easily, their parents have to set more limits at a time they want to explore and do things on their own.”

Emerging speech and language skills also lead to tantrums. “While toddlers are making great strides in language, they cannot always communicate their wants and needs clearly, which can also lead to frustration,” Wagner says. “Also, toddlers do not have the capacity to self-regulate yet. This skill may be emerging or ‘on the way’ but isn’t one they are consistently demonstrating.”

How to deal with tantrums

You have limited options when someone is yelling in your face and screaming in a public place. And walking away isn’t an option if you’re at the grocery store and that someone is your child. Here are five practical tips for how to handle toddler tantrums:

1. Plan ahead
To help prevent tantrums, you can plan ahead (it helps when the kids are well fed and well rested before heading out to be with other humans) and pack an anti-tantrum kit (little toys and other favorite items). But sometimes, life happens. And in that case, you just have to work through the pain.

2. Stay calm
Remember, you’re the grown-up in this situation. “Helping your child through the tantrum will be most effective if you stay calm yourself and are able to wait it out as long as the child is not doing anything unsafe,” Wagner says. She also warns against raising your volume and tone, as that “will often escalate your child.” A gentle rub on the back and soothing tones can work wonders.

3. Talk it through
While some toddlers may not be able to verbalize their frustration (which is often the reason for the tantrum), it’s worth asking him to use words to explain his feelings. In a calm voice, ask the basics: What’s wrong, why and how do we fix it? Once the dialogue is opened, it may shorten the meltdown time.

4. Move it before you lose it
At-home tantrums are one thing—the kids can let loose without fear of judgment. If you’re out and about, move to a less-trafficked space if you’re blocking an area, and let them let it out. “Reducing stimulation is going to give them the space they need to regulate their emotions,” Wagner says.

5. Address your audience
While it feels like every eyeball is on you in a public setting, remember that other parents have gone through the same scenario and are empathetic to your plight. If someone does approach and/or comment, remind them this is not the first time in the history of children that this has ever happened. A simple, “We all have our meltdowns, don’t we? I’m looking forward to 10 minutes from now when we’ve all calmed down.”

Time-outs: yes or no?

If you’re wondering whether to take a no-tolerance policy on tantrums, the answer is usually no. They will happen, and you’ll have to live through them.

In most cases, “I don’t recommend time-outs for tantrums,” Wagner says. “For instance, I would not recommend a time-out for a child who tantrums because their parent said no to their request to a candy bar. Instead, I’d recommend that the parent sticks to their decision and minimizes their reaction to the tantrum.”

However, some parents may want to use punishment strategies if their child is aggressive, destructive or defiant. “If the child hits the parent after they said no, I’d recommend a time-out,” she adds. Wagner goes on to explain that a time-out, which is a break from all positives in the environment, is one of the most effective strategies for young children if used correctly.

When will they end?

Wagner says tantrums typically peak between 17 to 24 months and tend to decline by age 3. “There is some evidence that children who consistently have high rates of tantrums during the preschool years will have problems over time,” she adds. “If a child is having multiple tantrums a day and is repeatedly having trouble calming down, it may be a sign of a more serious concern, including a disruptive behavior disorder.” (In which case, it might be wise to talk to your doctor about how to address the issue.)

But mostly, it’s just toddlers being toddlers. There is a light at the end of the tunnel. Remember the phrase, “Keep calm and carry on”? Perfect for this scenario—with an addendum: “And carry a snack and a small toy at all times.”