Disciplining Toddlers: Why Time-Ins Are the New Time-Outs

When your little one is acting out, instead of giving them a time-out, consider this alternative approach to toddler discipline. 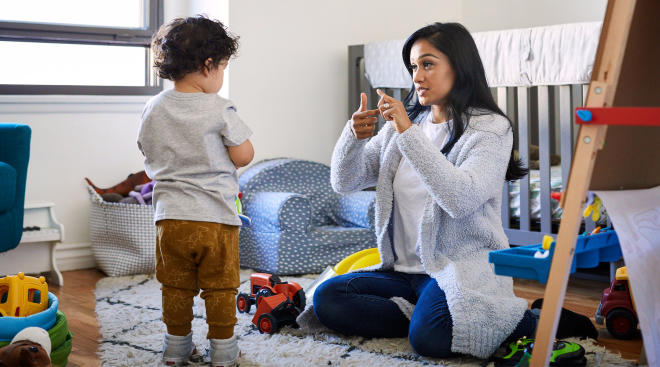 Your toddler is grabbing toys from their sibling, whining and otherwise acting like a terror. While your instinct may be to call a time-out, a new alternative called “time-in” may be your best bet. What is a time-in, how does it work and can it be an effective parenting strategy? Here, what to know about this positive discipline technique.

In this article:
Time-ins versus time-outs: What’s the difference?
Why use time-ins for kids?
How to use time-ins effectively

Time-Ins Versus Time-Outs: What’s the Difference?

Chances are, you’re familiar with the concept of a time-out: A misbehaving child is taken away from a source of conflict for a brief period of time to calm down, think about their actions and return to playing when they’re ready to cooperate.

But with the emergence of time-out chairs, time-out steps and rules such as one minute of time out for each year of your child’s life, experts warn that time-outs may have become misunderstood and misused. “The point of a time-out isn’t to shame a child, it’s to help redirect misbehavior,” explains Scott Hoye, PsyD, a psychologist in Chicago who works with children. “But time-outs have become a form of punishment, which can escalate a conflict further.”

Enter the time-in. Like a time-out, a time-in recognizes that your child’s misbehavior is likely a result of being overwhelmed and takes them away from the source of conflict. But unlike a time-out, where you leave your child alone, during a time-in you stay with your child, giving them the space to calm down while providing a reassuring hug or pat on the back. When your child is ready, you can talk to them about their feelings and motivations for their behavior, giving them time to think aloud and come up with solutions for how to handle conflict when they come back to play.

For example, say your 3-year-old was continually taking his sister’s toy. In a traditional time-out, he may be exiled to a corner of the room for three minutes. In a time-in, you would take him away from the toy, sit with him and talk about how hard it can be to share, allowing him to voice his frustration and troubleshoot potential ways to minimize future conflict. Together, you might brainstorm how he and his sister could play with the toy together, or come up with other activities he could do while he waits his turn. “A time-in helps a child understand that their range of emotions, including anger, are normal and healthy, and helps them learn how to appropriately manage those emotions,” Hoye explains.

Why Use Time-Ins for Kids?

The concept of a time-out can be advanced for a kid, says Roseanne Lesack, PhD, a licensed psychologist and owner of Lesack Parenting. “You’re asking them to quiet down when they’re angry and think about their behavior. That can be tough for us as adults to do.” Instead, Lesack says a time-in allows you to coach a child on appropriate ways to handle their feelings.

A time-in can also be a great way for you to tune into your feelings too, and can remind your child that you’re also a person with complex emotions and needs. “Sometimes, a time-out occurs because the child’s behavior is making the parent angry. Then the child is angry, the parent is angry and the time-out has only served to escalate conflict,” Hoye says. A time-in can give you both the chance to calm down and also to remind your kid that getting overly upset isn’t a sign something’s “wrong”—it’s just a sign they need to press pause until they can calm down.

How to Use Time-Ins Effectively

This discipline technique can work for all ages, but experts warn that it doesn’t need to be overly complex or wordy for younger toddlers. “For a 1- or 2-year-old, redirection may be all they need,” Hoye says. For example, if a 1-year-old is tussling over a toy, simply taking them away and saying “you’re mad, but we don’t hit our friends!” and then bringing them to another toy may be all it takes to reduce the problematic behavior.

For older toddlers who are verbal, it’s also smart to keep the time-in short and to the point, giving them the option of returning to the activity when they’re ready. Say your toddler is angry that she can’t watch a show, and says “I hate you.” Take her aside, Lesack suggests, and explain that you hear she’s very angry but that she can’t say hurtful words. Give her a hug, tell her you love her, and say you’ll be waiting in the other room for when she’s ready to join you. She may not be ready for a few minutes, and that’s okay. “Check in, tell her you miss her and are excited to play, but otherwise do your own thing,” Lesack says. Once she’s back in the room, it can be tempting to remind her how much more pleasant everything is when she’s nice, but try to focus on the present. “Once the incident is over, it’s over,” Lesack says.

Here, some more do’s and don’ts to consider when it comes to time-ins:

• Do be honest with your toddler. If you’re angry or frustrated, say so. “Toddlers can sense tension, so telling them you also need to calm down can teach them that feelings are normal and they’re not wrong or bad for feeling angry,” Hoye says.

• Don’t use a time-in as a threat. Like a time-out, a time-in isn’t meant to be punishment. It’s simply a way to redirect behavior. If you find yourself constantly threatening a time-in, or time-ins have become a point of conflict, it may be time to assess the source or pattern of conflict you have with your child; a behavioral therapist may help point to patterns or techniques that can work best for your relationship.

• Don’t try to rationalize. “Toddlers are irrational beings,” Lesack says. While it can be tempting to use a time-in to try to rationalize why they should act the way you would like them to, the time-in should be a time for your toddler to reach a conclusion. If they can’t do that, simply letting them know you love them and they can come back and join you when they’re ready is enough. They don’t need to be able to articulate that the reason they need to use a nice voice is because it makes people feel good—they can understand that based on your actions.

• Don’t be afraid to experiment. While consistency is key for behavioral techniques to stick, experts remind parents every child is different. A very sensitive kid may benefit from a time-in with lots of hugs and reassurance, while you may find it’s easier for your other child to calm down if you sit next to them but let them work out their anger on their own.

Bottom line: A time-in can be helpful for both you and your toddler to work through complicated emotions without getting caught up in anger and resentment. It may take a few tries to find the right rhythm of a time-in that works for your family, but doing so may reduce conflict, tears and refrains of “not fair”—for both of you.

Teaching Toddlers Not to Hit

What to Do If Your Toddler Bites