The top 5 worst parenting tips — ever. You won't believe what moms are hearing! 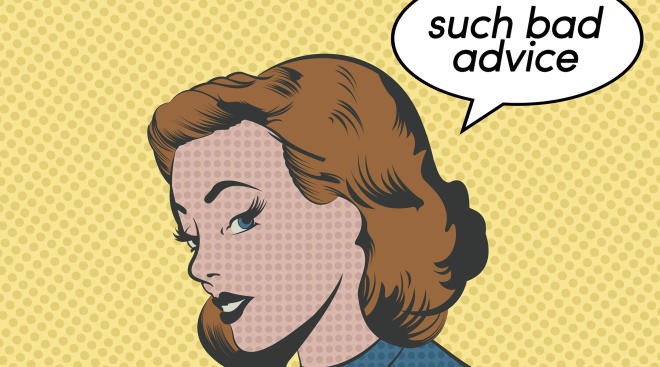 If you feel like you got hit with tons of parenting advice the second you started sporting a bump, you’re not alone. Moms-to-be often discover that everyone from future grandparents to the guy at the corner deli have plenty of unsolicited words of wisdom to share. Sure, some of the advice you get from well-meaning friends (or strangers) may turn out to be helpful, but sometimes it can also be downright crazy. Bumpies share some of the wackiest parenting advice they’ve ever had the displeasure of hearing:

Smack baby’s gums?
“I was told to smack my daughter’s gums with a spoon so I could tell if she’s teething. I guess you’d hear a click if there are teeth under the gums?” —soon2beMrs.H

Our take: Ouch! We’re pretty sure all this will get you is a screaming baby. Trust us, a spoon won’t be necessary to tell you whether or not baby’s teething — you’ll know. Some telltale signs include raw gums, constant crankiness, and over-the-top drooling. Most babies hit the teething stage between 4 and 7 months, so if this sounds like your tot, drop what you’re doing now and stock up on teething toys, frozen washcloths, and baby pain reliever. You can run your finger along baby’s gums to see if there are any teeth breaking through.

No car seat?
“My father told me to not worry about a car seat. He said, ‘Your mother kept you and your sister on her lap on the ride home!’” —april 145

Our take: Do baby a favor and don’t pull a Britney. Sure, Dad may mean well, but times have definitely changed since you were in diapers — for the better. Car seats aren’t an option; they’re a must (legally speaking), and babies should never go for a ride anywhere unless they’re properly strapped in. Make sure you have yours already inspected and set up in your backseat well before your due date. This way, you’ll be prepared in case baby decides to come early. Wondering where you can get your car seat inspected? Go to SeatCheck.org to find a safety inspection station near you.

Playing with ice cubes?
“My sister’s ex-husband felt it was okay to let the baby ‘play’ with ice cubes. When I pointed out that he could choke on them, he said, ‘They’ll melt, won’t they?’" -faithe2009

Our take: In terms of potential babysitters, this guy deserves to be blacklisted. As a general rule, baby should never be able to grab anything that’s small enough to fit through the tube of a toilet paper roll. Ever. When your little guy starts to crawl and later walk, he’ll turn into an instant detective, wanting to inspect everything — and babies often explore new items by putting them in their mouths. Make sure you keep anything that’s small enough to be a choking hazard far away from his grasp and don’t forget to baby-proof all of your cabinets and drawers. Ice cubes are fine in a mesh feeder, but otherwise? No.

Don’t swaddle?
“I was told by my grandmother that I shouldn’t swaddle my newborn because it’d cause her arms to be deformed and that she needed to be able to stretch her muscles.” -silvurturtle

Our take: Sorry, Grams, but this one’s just plain wrong. Swaddling has been practiced for hundreds of years as a way to keep baby warm and toasty, and the fact that it reminds her of being in the womb will also calm her down and help her sleep better. If you’re not sure how to swaddle, ask for a quick lesson before you leave the hospital.

No cuddling?
“I was told that if you hold a newborn or infant too much, you’ll spoil them.” —Beaniesmommy

Our take: Surprisingly, we hear this one a lot, even though it couldn’t be further from the truth. You don’t have to be Dr. Sears to know that bonding with baby is hugely important — especially in those first few months of development. Feel free to cuddle and hold baby as much as you want! Just make sure you still allow him some independence as he grows. If baby cries when you put him down, try rubbing a sock or small cotton cloth on your body and placing it near him. Your familiar scent can help calm him even if he’s not in your arms.