One thing fatherhood has taught him so far? A new appreciation for coffee.
save article 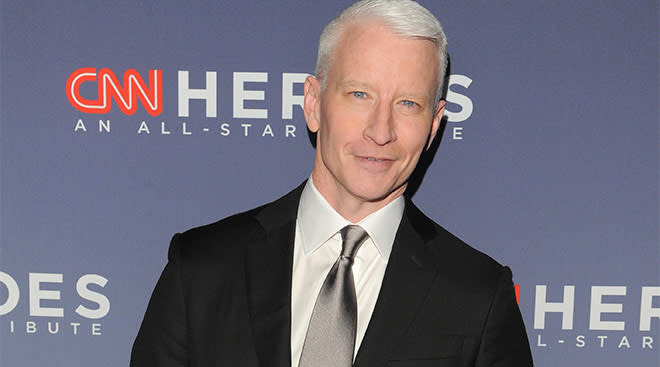 Anderson Cooper loves being a dad!

The CNN anchor opened up about fatherhood on Monday, May 4, while ending his show, “Anderson Cooper 360” and handing things off to Chris Cuomo for his “Cuomo Prime Time.”

“It was great. It was awesome,” Cooper, 52, said about his first weekend with his son. “I spent the whole weekend just looking at him and burping him and feeding him,” the new dad added. "It was great. I was saying during the break, it’s like a little amphibious tree frog on my chest.”

Cuomo, a father to three, laughed and replied, “You will come up with better metaphors for what your son reminds you of than an amphibious tree frog, but you’re new to this. You’ve got a new baby, and it’s a new you, too, and I love watching you laugh and smile. There will be nothing else like it in your life. I love you. Congratulations again. It’s good news. I have to mooch off it."

Later that evening, during an episode of the "The Late Show with Stephen Colbert at Home,” Cooper discussed his fatherhood journey thus far—and how he’s recently discovered coffee. “It’s astonishing…I just stare at him and hold him. I just can’t believe that…he’s gonna depend on me and that he’s here. It’s just astonishing. I just never dreamed—I mean I’ve always dreamed about it, but I never thought I would actually be able to do it. It’s just been incredible,” he told Colbert, adding. "I had tried once or twice on TV a cup of coffee, and I didn’t see the point. But now I totally get it. I can’t believe—I think I’m addicted because it snaps your mind into focus. I wake up thinking—I think of my son first, but caffeine is a close second.”

Along with his newfound love for coffee, Cooper also revealed that Andy Cohen, Bravo’s late night show host and dad to one-year-old Ben, has been in the loop about his parenting plans for a while. “[Andy’s] actually really helped me because my son is entirely wearing hand-me-downs from [his] son. I’m inherently cheap. I like a good value,” he joked, explaining that during the pandemic getting clothes from Cohen has been easier than trying to buy them online. “I wanted my son to be like a Depression-era child who grows up wearing hand-me-down clothes.”

Cooper announced Wyatt’s birth on his show on April 30, saying, “It’s been a difficult time in all of our lives, and there are certainly many hard days ahead. It is, I think, especially important in these times of trouble to try to hold on to moments of joy and moments of happiness. Even as we mourn the loss of loved ones, we’re also blessed with new life and new love.”