With the dreaded flu season upon us, one mom shares a cautionary tale.
ByStephanie Grassullo
Associate Editor
PublishedSep 2018 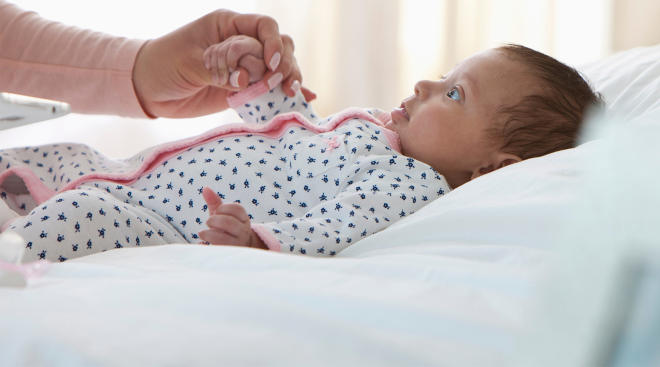 As parents, we are in a constant state of dread over flu season. We dwell on its impending arrival, are on high alert during its nearly six-month stint and suffer from PTSD long after it runs its course.

Blogger and mom Charlie O’Brien is heading into this year’s flu season with an important takeaway she picked up from her baby’s scare last year.

“I stumbled across this on my phone and thought it may be useful to share,” O’Brien explains in the caption of her video. “When Luna was four weeks old, she had a really quiet day of sleeping and barely any crying (unusual for Luna!).”

Like any mother, the blogger watched her adorable baby sleep, enamored by even the slightest movements. After observing her sweet girl, she noticed something seemed a bit off.

“I was watching her sleep next to me and realized it didn’t look right. I unbuttoned her babygrow and this is what I saw,” she says, referncing her baby’s breathing captured in the video.

“Sucking in at ribs is a sign to get your baby or child to the hospital. She had bronchiolitis and her oxygen levels were very low,” the mother explains.“Luckily after a night on oxygen she made a very good recovery. We’re heading into the dreaded season of non-stop colds, coughs and viruses, so thought it was worth a mention.”

Many have taken to the blogger’s post, sending messages of gratitude for sharing the video.

“I came across [this video] yesterday online, being aware of bronchiolitis as our friends little girl has it… Little did I know, I’d be calling 111 this morning having referred back to your video,” a fellow mom writes. “The 111 operator called an ambulance, and three minutes later I had paramedics at my house assessing our son. We were rushed to our local hospital with lights and sirens this morning, and they think he has bronchiolitis but caught it early.”

“Fabulous video. I’m going to save this and show it to my clients—I’m a community children’s nurse,” says another.

“Well done for highlighting this. It’s quite hard to explain the symptoms, but your clip does just that,” reads a note of praise.

As we bunker down for a season full of colds and viruses, be sure to take your kid to get a flu shot as soon as possible.