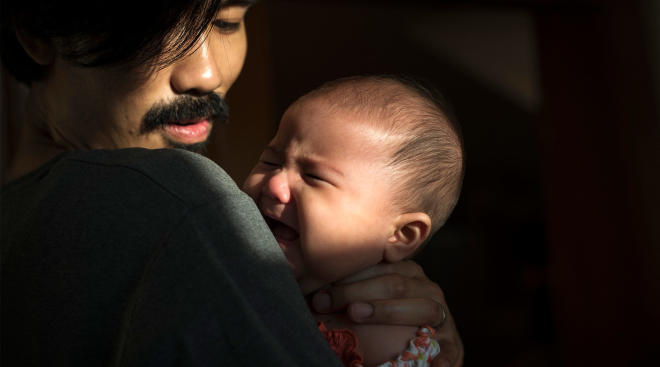 You and baby have such a special bond, you’re literally on the same brainwave. Yet for the life of you, you have no idea why they’ve been wailing since 2:00 a.m., and you’re about to jump ship. What you really wish you could do is Google Translate your baby’s cries to figure out what the heck they want. Well, thanks to the latest research, you can (sort of).

While not Google Translate persay, researchers say they’ve developed a “baby cry translator,” Smithsonian.com reports. “Experienced nurses or pediatricians can identify why a baby is crying because they have experience,” says Lichuan Liu, a professor of electrical engineering at Northern Illinois University, who conducted the research at the Digital Signal Processing Laboratory. “We talked to them, and they mentioned that based on the cry’s sound there are some clues.”

Liu and her team set out on a mission to identify the different features of cries that may help mark them as expressions of pain or discomfort. They considered characteristics such as pitch and frequency of the cries, and developed an algorithm to detect and identify these features. They then had pediatric care providers assess 48 baby cry recordings to come up with the possible cause for crying—hunger, tiredness, gas pain and other causes. They compared these to the algorithm’s assessments, and the algorithm agreed with the medical experts 70 percent of the time.

While the baby cry translator isn’t available to the public just yet, Liu has applied for a patent on the technology and hopes to develop a machine new parents will be able to use. “You can figure out why [baby’s] crying and use appropriate techniques to soothe your baby,” she says. “Then if it’s something really special, you can understand maybe it’s an emergency.”

But not everyone is hopping on the bandwagon. “Think how difficult it is for a human to recognize emotions in somebody that they don’t know. Compare it to how much easier it is to recognize an emotion when we know a person,” Julia Rayz, a professor of computer and information technology at Purdue University, tells Smithsonian.com. “A computer has to go through the same thing, except that it usually generalizes the information across populations. So, for somebody who seems like they are smiling in their neutral phase, a computer may say that the person’s face shows a genuine smile—correlation with happiness—while it is not true. Same with unhappiness.”

Whether or not the machine will ever make it to retail is up for debate. But for now, refer to these 11 reasons why baby may be crying when your little one is having a meltdown.