“We will be one of the first companies to provide the digital and internet phenomenon who is trending higher than all the presidential candidates combined.”
ByNehal Aggarwal
Associate Editor
PublishedJan 2020 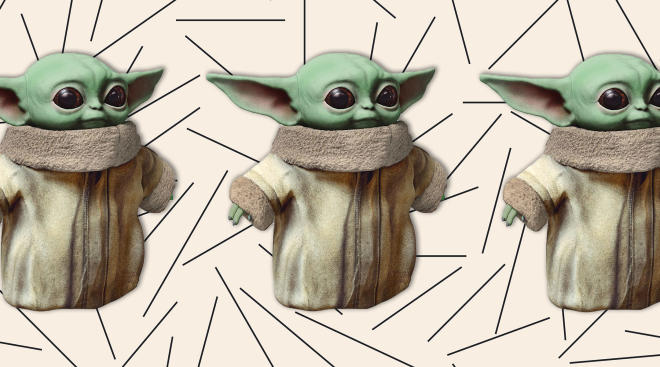 Baby Yoda quickly took over the Internet after the character’s debut on Disney Plus’ new show “The Mandalorian” in November. It even topped the list for Google’s 2019 Year In Search, despite having emerged so late in the year. Merch for the popular “The Mandalorian” character has steadily been in demand, and now Build-A-Bear is adding itself to the list of retailers that want to dip into the Baby Yoda market.

It was announced at the ICR Conference earlier this week that Build-A-Bear Workshop will start selling Baby Yoda—who’s official character name is “The Child”—stuffed animals, Business Insider reports.

“I’m excited to share we will be one of the first companies to provide the digital and internet phenomenon who is trending higher than all the presidential candidates combined,” the outlet reports Build-A-Bear CEO Sharon Price John saying during the conference. “It’s great, again, to be in business with best-in-class partners. We started this process almost with the first episode.”

Reports of Baby Yoda merchandise stormed the internet soon after the character went viral. But, because the show’s creator, Jon Favreau, chose to keep the character a secret until the premiere, merchandise is currently only available for preorder and will likely ship in the spring. Similarly, fans will have to wait a few months before they can get their own stuffed Baby Yoda at Build-A-Bear Workshop.