“The skeleton’s been coming everywhere with us.”
ByNehal Aggarwal
Associate Editor
PublishedSep 2020 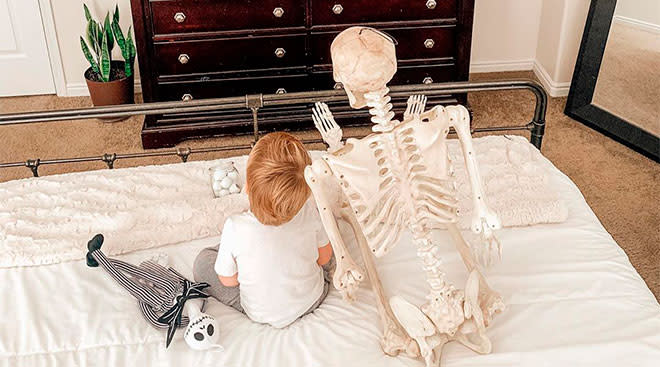 Abigail Brady of Salt Lake County, Utah was just trying to start decorating for Halloween a little early. Little did she know she had inadvertently introduced her toddler to his new best friend.

Brady’s 2-year-old son, Theo, has become inseparable from Benny, the 5-foot-tall skeleton. Brady even has to pack Benny to run errands or take Theo to play at the park. While her son’s new friend can be cumbersome, she loves the smile it brings to passersby.

“2020 has been probably one of the craziest years in a while and I know it has brought a lot of people a lot of turmoil and a lot of hardship,” Brady, 27, of Salt Lake County, Utah, told TODAY Parents. “My hope is that this can just spread some happiness. Even if it makes someone’s day for a couple of minutes, that makes me so happy.”

Brady first brought Benny, aptly named after the Halloweentown character, home on September 15, the outlet reports. She had gone down to her basement to put the dog in his kennel before heading out with Theo, but saw the basement had flooded and stopped to clean. On her way upstairs she heard Theo saying, “Mom, mom, help, help, help,” and found him trying to take the skeleton upstairs.

“I was like, ‘Oh my gosh that is so funny.’ So I brought it upstairs. (I thought) I’ll just start decorating for Halloween early,” Brady said, but Theo wouldn’t leave without it. “He refused to get in the car, just flat-out refused. So I was like, ‘I’ll bring it in the car, it’s not that big, it’s not that big of a deal…We’ll just bring the skeleton with us and it’ll be a party.’ Ever since then, the skeleton’s been coming everywhere with us.”

Benny has indeed been at Theo’s side—at the beach, in the grocery store cart. She explained her son even tries to feed the skeleton and gets a good laugh when the food drops down through his ribs.

While Theo hasn’t insisted on bringing Benny everywhere as often recently, he does insist that Benny sleeps in his room at night and got upset when Brady tried to move him. “He was like, ‘Skeleton! Skeleton!’ So I put the skeleton back in his room and he just sits on his rocking chair while Theo sleeps,” Brady said. “(Theo) loves to give Benny knuckles and high fives and he pokes him in the ribs. It’s cute.”

While Theo and Benny’s friendship has brought Brady some joy, she also loves seeing the reactions people have to the pair. “My biggest thing is just helping to make people smile,” she said. “A lot of people just love it.”