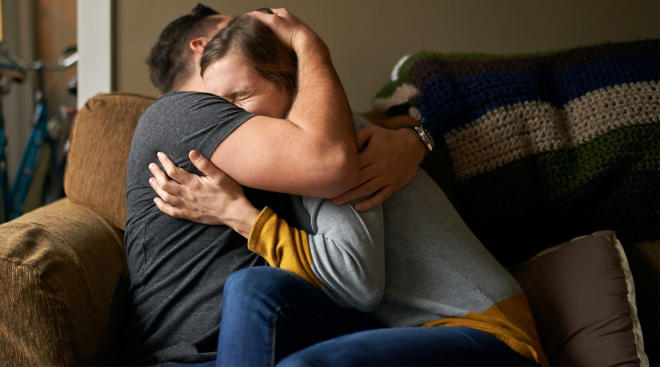 So many parents silently suffer after losing their baby to miscarriage or infant loss. It’s a harsh reality most don’t know how to talk about, especially dads.

Which is why Al Ferguson’s message for fathers and fathers-to-be couldn’t be any more important. The founder of The Dad Network opens up about how he copes with his wife’s miscarriages, and why he isn’t ashamed to let his feelings show.

“I’ve had a cry today. Well, actually, quite a big cry, but that’s okay,” he admits on his and his wife’s shared Instagram account.

“It’s okay to not be okay, and it’s more than okay for men to cry. Thinking of everyone affected by baby loss this evening,” Ferguson candidly says.

To honor his lost babies, the dad shared a picture of him and his wife—who is wearing a shirt that reads “angel momma”—holding a tray of tea candles. “Seven candles for seven babies gone too soon,” he explains.

His post couldn’t have come at a better time. On the heels of Pregnancy and Infant Loss Remembrance Day, it’s a much-needed reminder for men who are fathers, or who hope to be fathers one day, to allow themselves to be vulnerable to all their emotions.

Many have written comments to Ferguson to commend him for being so open when talking about such a difficult topic.

“It’s so brave to share your experience. It will help others to know they’re not alone,” one says.

Another agrees, saying, “so amazing that we are all talking about the topic.”

“Thinking of you and can’t thank you both enough for encouraging so many to be so open. It is the most awful thing in the world, but support and community is so amazing,” a fellow parent writes.

While it is important for parents to learn how to cope with grief after loss, it it just as important for friends and family to understand how to talk to someone who suffered from a miscarriage.