“One of my favorite things about parenting our amazing sons. The giant family we automatically joined because of 47 perfect chromosomes.”
Save article
ByNehal Aggarwal
Associate Editor
PublishedMar 2020 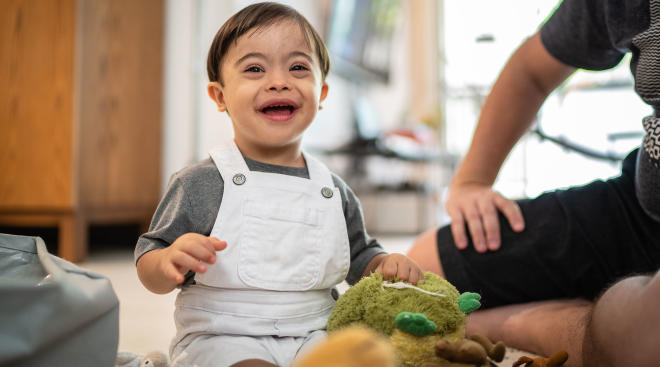 One mom’s sweet Facebook post about how she connected with another family on her flight home to Calgary, Canada is going viral.

Holly Graham was recently visiting Florida with her wife, Alex, and their two adopted young sons, Jaxson and Niko, both of whom have Down syndrome, she explains in the post. They were having trouble getting home due to flight cancellations, unexpectedly had to stay overnight in Toronto and were dealing with cranky children, Graham told TODAY Parents in an interview.

But her mood changed when she boarded their final flight home. “We’re dirty, we just feel all gross, the kids are exhausted,” Graham said, adding that they hadn’t been able to get their luggage. “We sit down, we get the kids settled, we’re watching people file on the plane, and we noticed a couple with their young man of a son who had Down syndrome.”

They wound up in the row in front of Graham and her older son Jaxson, she explained, adding that Alex and Niko were a few rows behind. “I’m like, ‘Oh my god, this is going to be the best flight ever,’” Graham told the outlet. “This young man was exactly how Jaxson was. I spent the first 20 minutes of the flight on the verge of tears watching him… He kept turning around, playing with Jax, they’re making faces at each other, and his mom kept trying to distract him, kind of like ‘Stop bugging those people behind you.’ Then she turned around, and she saw Jax and noticed Jax had Down syndrome and her face just lit up.”

While the family spoke “broken English,” they were able to tell Graham their names and ages, including that their son was 20 years old, she explained. Halfway through the flight, Graham and Alex switched kids. "The mother sitting in front of me saw Niko, who is 2 years old and still looks like a little baby, and noticed he had Down syndrome. This mother could not contain herself,” Graham shared.

While she explained to the outlet that she’s typically very protective of her kids, but after watching the woman “sing him songs” and “pet his face in between the seats,” she handed Niko to the woman effortlessly. “Her son was petting Niko’s face, kissing his cheek,” Graham told TODAY Parents. “It was just so neat, watching this mother just love on him. I just knew that she saw her past when she looked into Niko’s eyes. It was so cool to see that love that she had for him, and she didn’t even know him, or us.”

While she regrets not getting the family’s contact information, she did share her sweet story to social media, and it’s going viral, with over 109,000 reactions, 56,000 shares and 6,600 comments. “What a beautiful story . Puts a smile on my heart Hide or report this” one person wrote. Another commented, “Hey mamas, you are awesome…no language needed…you rock.”

Graham wrote in her post, “I would never ever hand one of my kids off to a complete stranger. But you weren’t a stranger. Despite never knowing you … You weren’t a stranger. You are family, you are my tribe, you are me. The connection, the understanding, and the bond we share because of our journeys. One of my favorite things about parenting our amazing sons. The giant family we automatically joined because of 47 perfect chromosomes. To the mama in row 19. Thank you.”