In honor of inauguration day today, we’re taking a look back at some memorable moments from the first families that have inhabited the White House.
Save article
ByNehal Aggarwal
Associate Editor
PublishedJan 2021 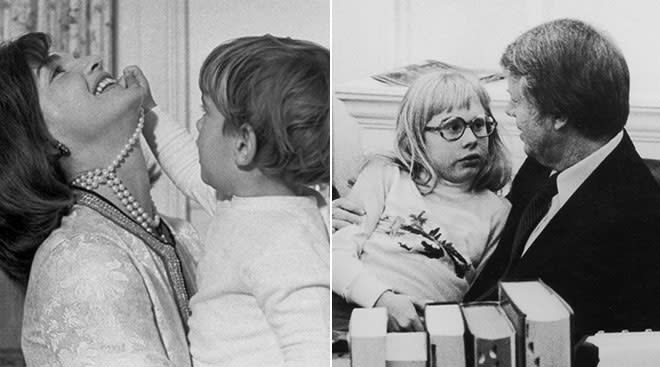 Today is Inauguration Day, a day that marks the start of 46th President Joe Biden’s term. In honor of the day and its history, we’re taking a walk down memory lane with some photos of former Presidents, First Ladies and First Families in the White House.

President Eisenhower and the First Lady pose with their son and his family on Christmas Day at the White House.

John F. Kennedy Jr. plays with a string of pearls around First Lady Jackie Kennedy’s neck at the White House as she laughs.

President Jimmy Carter’s then 10-year-old daughter Amy sits in his lap as they talk in the Oval Office.

President Ronald Reagan and First Lady Nancy Reagan celebrate their granddaughter Ashley’s birthday with their family at the White House.

President Bill Clinton gathers with friends and family, including New York Governor Mario Cuomo, Texas Governor Ann Richards and his daughter Chelsea who’s sitting in the foreground and holding her cat, Socks, to watch the 1993 Super Bowl XXVII on television.

Malia and Sasha Obama sit for a portrait with their parents in the Green Room of the White House.

First Lady Barbara Bush and her granddaughter, Marshall Lloyd Bush, watch over their pet dog, Millie, and her litter of puppies in the White House.

President Joe Biden and his family watch fireworks after his address on November 7 in Wilmington, Delaware.

Throughout the years, many presidents and their families have made memories in the White House, and we can’t wait to see the memories in store for the newest First Family as they move into their new home.