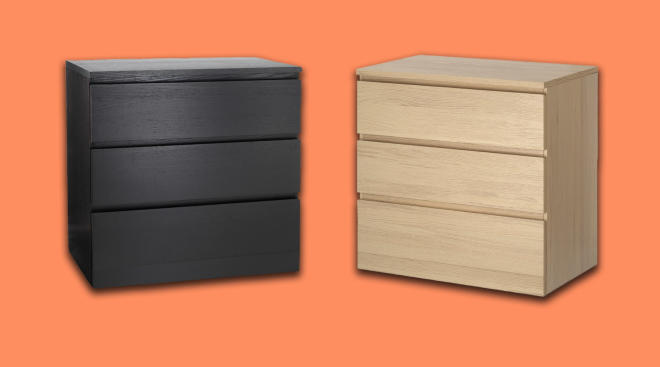 Furniture that may tip over has been a danger to children for quite some time, and, unfortunately, it continues to be so. The Consumer Product Safety Commission (CPSC) recently issued a warning regarding Hodedah HI4DR four-drawer dressers, which are sold by large retailers, including Amazon, Walmart, Sears and Home Depot. In the warning, they recommend parents anchor down furniture to prevent any potential injuries to kids, as, according to their tests, the dresser weighs approximately 75 pounds on its own.

While the CPSC continues to press for a recall on the product, it’s important to note that there are other products that pose similar dangers to kids that are still on the market. A few days ago, IKEA paid a $46 million settlement to a California couple, Joleen and Craig Dudek, The New York Times reports. The Dudeks devastatingly lost their toddler in 2017, after a 70-pound Malm dresser from IKEA fell on him. In the lawsuit, the couple argues that IKEA, aware of the design flaw, had not warned its customers.

In 2015, IKEA offered free wall-anchoring kits amidst reports of MALM-related injuries. In June 2016, The New York Times reports, the retailer issued a recall on the product—one which the couple was never notified of. Plus, this isn’t the only settlement IKEA has reached in the last few years. In 2016, they paid $50 million to three families who had lost children due to similar furniture tip-over incidents.

“We miss him so much,” the couple said in a statement issued by their lawyer earlier this week. “He would be turning 5 years old this April. We never thought that a 2-year-old could cause a dresser just 30-inches high to topple over and suffocate him. It was only later that we learned that this dresser was unstable by design and did not meet safety standards, and that this had happened to other little boys.”

On a lighter note, some of these alarming stories do have happy endings (remember the toddler who saved his twin?). But, unfortunately, furniture-related injuries are not rare among small children. According to the CPSC, from 2015 through 2018, there were approximately 20,900 emergency room visits each year due to furniture tip-over incidents. In this same time frame, these tip-overs caused at least 89 deaths, many of which sadly involved small kids.

At any given moment, parents usually have countless things to do. But, if you have a small child at home, it’s important to babyproof your living spaces—and that includes anchoring any furniture that baby might come into contact with. Luckily, there are several things you can do both before baby comes home and after baby starts to move around. For more information on babyproofing your home, check out these tips.