The party literally went up in flames, resulting in a 47,000-acre wildfire.
save article 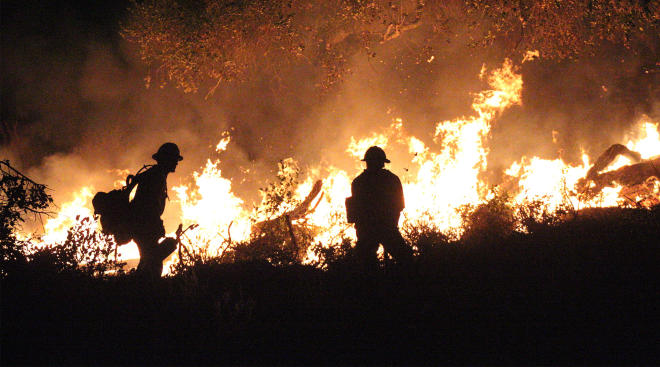 Gender reveal parties are a fun way for a couple to share the gender of their baby with friends and family. Lots of couples get super-creative when it comes to the execution, but there are also your fair share of epic fails.

Yet, nothing quite tops the aftermath of one Arizona gender reveal party, which ended in a 47,000-acre wildfire and a $220,000 fine for the dad-to-be, reports Tuscon.com.

Last year, Dennis Dickey attempted to stage an elaborate gender reveal for his wife. It involved shooting a target where the off-duty border patrol agent placed Tannerite, a highly explosive substance. When hit, the explosion would give off either pink or blue powder to reveal the sex of their baby.

But all didn’t go according to plan. Dickey fired a shot causing the Tannerite target to explode, and resulted in a fire that spread and damaged more than 45,000 acres of land. Nearly 800 firefighters battled the Sawmill Fire for about a week, at a cost of about $8.2 million. Miraculously, there were no injuries reported, and the wildfire didn’t affect any buildings nearby.

The “reveal” was all captured on camera, where it was used as evidence in court. Last week, the man plead guilty in federal court to a misdemeanor charge of causing a fire without a permit.

While Dickey’s intentions may have been the best, his execution is certainly questionable. His mistake comes at a high cost, where he will now pay $100,000 in restitution when he is sentenced on Oct. 9, and another $120,000 in monthly installments of $500 for the next 20 years.

If he and his wife ever decide to have baby No. 2, hopefully they’ll just stick to a balloon reveal.