The Lizzie McGuire star’s reveals her son had a hard time adjusting to the arrival of baby no. 2.
facebook
twitter
copy link
email
save
ByNehal Aggarwal
Associate Editor
Published February 5, 2020

As parents, you try your hardest to do the best by your kids, but, even so, sometimes it can be hard to escape the mom guilt—just ask actress Hilary Duff.

Last week, the and mom of two opened up about dealing with guilt over her second pregnancy. She revealed that her son Luca, aged 7, had a really hard time adjusting to the arrival of her Banks, her one-year-old daughter with husband Matthew Koma. “The guilt that I felt for bringing her into the world was so big,” Duff said in an interview with PureWow. “It was just he and I for so long that he was like, ‘Why? Why, Mom? Why would you do this? I really just love the way it is.’ And it wasn’t bratty, it was just so sad.”

The Lizzie McGuire star even admitted she was nervous about the adjustment for him at first. “I was like, ‘How do I reverse this?! It’s too late now.’ It’s such big feelings. When you’re pregnant, everything just feels more magnified,” she told the outlet.

But, Luca wound up transitioning into his role of big brother pretty naturally. “He came in after I had her. I was just holding her, and the look on his face was an absolute shock. He just said, ‘That’s my sister!’ And he had to sneeze, so he ran out of the room and was like, ‘I’ll be right back.’ He let out this huge sneeze in the hallway and said, ‘I had to sneeze and I knew I couldn’t do it in here near her,’” Duff shared in the interview, adding that now he’s “100 percent obsessed with her.

It’s the best. It’s a chemical reaction between siblings sometimes where he knows he has to protect her,” she continued. “It’s really sweet the way he looks out for her. But also, sometimes I’m like, ‘Hey, I did OK with you. I promise I know what I’m doing.’”

Adjusting to baby number two can be challenging. If you’re looking for ways to help prepare your child for the arrival of a sibling, check out our top tips.

Simone Davies and Junnifa Uzodike
Coauthors of The Montessori Baby 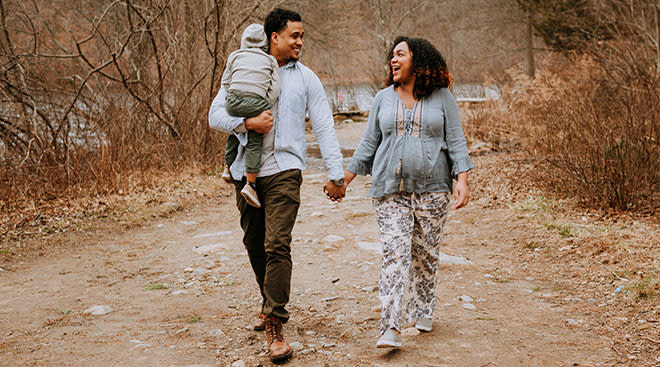