The Honest Company founder dishes on how she’s juggling life as a mom of three.
Save article
ByLaurie Ulster
Contributing Writer
PublishedAug 2018 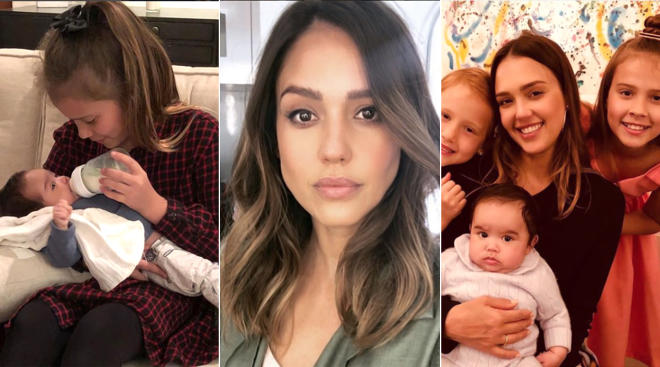 Jessica Alba may have hit it big as a gorgeous action hero (Dark Angel, anyone?), but these days she’s got a lot more going on than a TV series.

Granted, she does have a TV series—she and Gabrielle Union will be co-starring in the Bad Boys II spinoff L.A.'s Finest. But she’s also the co-founder of The Honest Company, a multi-million dollar company specializing in natural beauty and baby products, and the mother of a 10-year-old, 6-year-old and 7-month old baby. It’s exhausting just thinking about it.

With a new baby in the mix and a new diaper product about to launch, Alba opened up to The Bump about how she’s juggling it all, from getting the kids to pitch in to keeping them in line, all while showering them with love.

There’s (clearly) a lot going on in her life, so Alba expects her children to step up and help out, especially when it comes to cleaning up their own messes. “It’s not a discussion, it’s just how it is,” she says firmly, though she admits she does have to nag them. (They’re kids, after all.) If they don’t pay attention when she asks them to do something, they lose privileges. That can mean timeouts in their rooms or time without electronics.

“I think the hardest thing is to stick to it, because it’s sad,” she confesses, echoing every parent who’s had to stand firm even when their willpower wavers at the sight of their weepy kid. She described how difficult it was for her keep her oldest, Honor, from going to lunch with her friends after some bad behavior, and how she had to tell her Haven, her 7-year-old, that, “only kids who know how to listen get to play,” as she imposed a timeout. But she says she keeps those timeouts short—about 10 minutes.

Of course, she also knows how to show the love. She says she’s learned a lot from her father-in-law, Michael Warren of Hill Street Blues fame, who used to put notes in all of his kids’ lunches every day, writing everything from words of encouragement or mantras to something personal about them. “The kids knew their dad was taking the time every day to consider them, so they always felt seen and heard,” she says. “I think that’s an important thing. Your kids want to be seen and heard.”

That’s a good message for parents of kids of any age, from toddlers to teenagers. Then again, there are moments when kids getting heard might land their parents in hot water.

“Honor told her preschool teacher that I liked to drive and drink vino,” Alba says, laughing. “Not at the same time, but she didn’t clarify that bit. She told her teacher that’s what she was going to do when she grew up. Like her mom.” Another reason to be grateful for savvy preschool teachers: “I took it much more seriously than she did,” Alba admits.

So how is she navigating life now that there’s a new baby on the scene? Alba’s not sleeping much, that’s for sure. She’s also elbow-deep in diapers. The constant changes (and occasional blowouts) are every new mom’s enemy—which is why Alba enlisted her son Hayes to help test out the newest Honest diaper with True Absorb™ technology, which hits stores and the Honest Company website August 6. “We stepped our game up on performance,” Alba says. The waist and leg areas got a redesign for a leak-free fit, and the inner core holds 17 times its weight in liquid (while still using eco-friendly, plant-derived materials, of course).

Whether it’s a better-than-ever diaper, a tried-and-true discipline tactic or a sweet way to remind your children they mean the world to you, moms can use all the help we can get. “It’s a lot,” Alba says of life with young kids. “But you just sort of tackle it as you go.”