From Super Wings to Paw Patrol and everything in between, here are all the major appearances your toddler wants to see.
ByStephanie Grassullo
Associate Editor
PublishedNov 2018 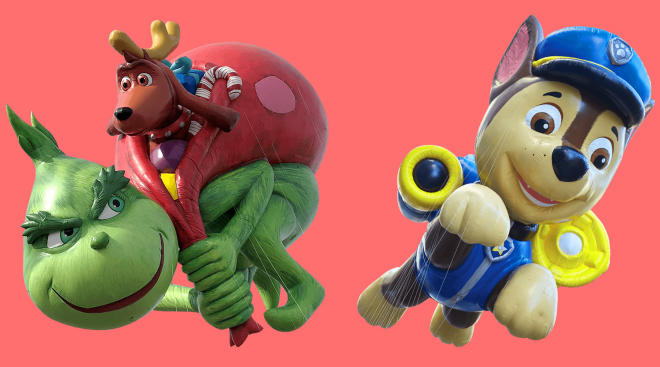 The Macy’s Thanksgiving Day Parade is an American staple. If you and your family don’t have the parade on Thanksgiving morning, you’re doing it wrong.

The annual Manhattan fanfare is filled with fun floats, performances and, of course, epic balloons your kid will want to see. For your viewing pleasure, we’ve grabbed everything your youngster will want to catch a glimpse of this year. Check out our parade highlights below.

Tune in to NBC for parade-day exclusives with hosts Savannah Guthrie, Hoda Kotb and Al Roker. The festivities kick off at 9 a.m. and wrap up at 12 p.m.—with the much-anticipated arrival of Santa! You can also experience the thrill of being in the heart of New York City with the 360-degree livestream.

The 92nd annual parade will feature fan-favorite balloons as well as some fairly new appearances. Here are the larger-than-life characters your kid will go gaga for when he sees them stroll down 34th street.

Everyone’s favorite snowman returns to the parade with his big smile and warm hugs. The float requires 90 handlers and is 60 feet tall, 59 feet long and 32 feet wide.

Keep your eyes peeled for the Grinch and his sidekick, Max, as they make their way through midtown Manhattan with a sack of toys. And be sure to catch the latest animated remake of The Grinch, which is in theaters now. Holiday weekend plans, anyone?

The fun-loving plane from the animated series Super Wings will make his second flight through NYC’s parade. Fun fact: The float’s wingspan is equal to the size of an actual Learjet!

Making its 18th consecutive appearance, Pikachu is traveling with his friend, Snowman Pikachu.

This year marks the 25th anniversary of the Power Rangers franchise, and the red ranger marks the longest balloon in the parade—his arm is 45 feet long, or the length of a school bus!

The cartoon character was the first-ever square balloon in the parade, and this year marks his 13th time making a visit to city that never sleeps.

The infamous trio—Poppy, Branch and Guy Diamond—is making their way down the streets of Manhattan in larger-than-life style.

The Elf on the Shelf

Where’s Scout Elf hiding today? At the parade, of course! Heads up, Scout will make his appearance just before Santa’s arrival.

The parade floats are always bursting with life and animation, and this year’s participants feature some of your kid’s favorite franchises.

Fans of all ages will be partying on the float with furry friends and cast members. This year marks the float’s 42nd consecutive year in the parade.

Fans of the Nick Jr. show can expect to see lots of glitter, gems and jewels as their favorite Shimmer and Shine characters strut their way down the streets of NYC.

The holidays wouldn’t be the same without the classic Peanut’s float making its way through the streets of Manhattan.

Kids can get a sneak peak at Santa’s toy shop, eye those gifts he’s working on and marvel at the beautiful reindeer helping to pull the sleigh.

While the performers may not be the highlight of your tot’s day, there are a bunch of singers mom and dad will want to see.

The singer, actress and record producer will take part in a performance you won’t want to miss.

With his newly-released holiday album, A Legendary Christmas, we can expect everyone’s favorite dad and husband to be singing the sounds of the season.

The a cappella sensation will perform a must-see rendition of a catchy hit.

The country music duo makes a pit stop in the heart of NYC to deliver some show-stopping tunes.