After all that work, her baby didn’t even shed a tear.
Save article
ByStephanie Grassullo
Associate Editor
PublishedFeb 2019 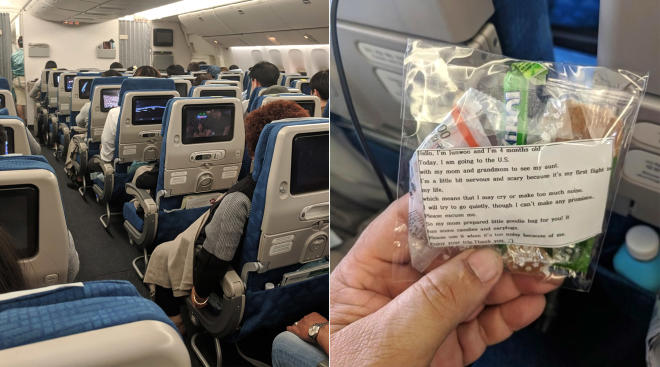 No matter how much you prep for it, there’s no knowing how your baby will react once in flight. What’s worse, horror stories from other parents are scary reminders that some people don’t react well to a fussy baby.

Anticipating the worst, one mom took the time—out of what we can guess was an already hectic schedule—to carefully wrap more than 200 care packages for her fellow passengers. The unnamed woman filled the goodie bags with ear plugs and candy as an added precaution in case her 4-month-old had an outburst during the 10-hour flight.

After all that work, her baby was nothing short of an angel.

“On a 10-hour flight from Seoul Korea to San Francisco, a mother handed out more than 200 goodie bags filled with candy and ear plugs, in case her 4-month-old child cried during the flight,” he explains. “A very touching gesture by the mother, but as you know when you have kids expect the unexpected. Not a peep out of the kid.”

The mom isn’t alone. She’s part of a special breed of new parents who go that (unnecessary!) extra mile to appease a few self-righteous people who think you owe them something when you’re already struggling to keep baby calm during a flight. Babies cry; it’s just what they do.

Don’t feel like you have to get on this goodie bag bandwagon. You have enough to think about in the time leading up to departure that it seems silly to add another chore to your list. If you think the gesture is the only thing that will put your mind at ease, then go for it. If not, don’t do it.

And when the unavoidable happens and baby starts to stir, take comfort knowing you’re not the first and you won’t be the last to fly with a crying baby. You may even be surprised by the reaction of those around you. One passenger gave up his first class seat to a mom traveling with her sick baby, and another mom received help from a bunch of strangers during her journey. That’s the type of camaraderie we can get behind.

Instead of carefully wrapping bags for others on your flight, put all your energy into making sure you have everything on The Bump’s handy Traveling with Baby checklist. Plus, here are nine tips for flying with baby to make it easier for you and your little one.