“My precious little bundle of joy was so well restrained in his car seat that he didn’t even wake up from his nap.”
Save article
ByLaurie Ulster
Contributing Writer
PublishedAug 2018 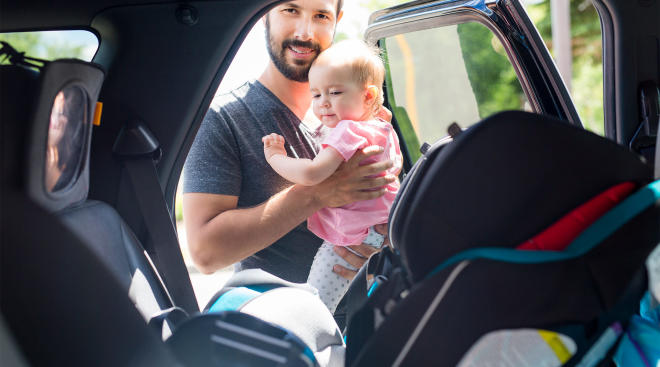 The next time you want to accuse a parent of being overprotective, remember this story: A Memphis mom sent her husband a nagging text about car seat safety just minutes before he and their baby were in a car crash, and her well-timed reminder saved the child’s life.

Rebecca Tafaro Boyer was having a hard time on her first day back at work from maternity leave, so she asked her husband for hourly updates on their 3-month-old baby, William. She wanted to know how he was doing on his first full day without his mama.

Her husband David was a good sport about it and texted her photos, including one of William in his car seat as they were about to head out for a Walgreens run. That’s when Rebecca’s sharp eye saved the day.

“My nagging wife reply was to correct William’s position in the car seat—the straps were too loose and the chest clip was way too low,” she later posted on Facebook. “And because I know my husband, I’m sure that he laughed at me and rolled his eyes before tightening the car seat and fixing the chest clip.”

Dad and baby set out on their journey. Fifteen minutes later, Rebecca got another text.

“Honey, we had a car wreck. We are fine, but the car is going to be totaled.”

The accident was caused by another driver trying to rush a sudden left turn, and David didn’t have enough time to stop. He slammed on the bakes at nearly 50 miles an hour and collided with the front passenger side of the other driver’s SUV.

David broke his foot in three places and is on crutches, and the car is totalled. But baby William, strapped securely and properly into his car seat thanks to his mom’s car seat savvy, emerged completely unscathed.

“My precious little bundle of joy was so well restrained in his car seat THAT HE DIDN’T EVEN WAKE UP,” she wrote. “Even with the impact of the two cars, William only received a minor jolt, so insignificant that he was able to continue on with his nap.”

Rebecca posted her story on Facebook to warn other parents about how important it is to make sure kids are properly strapped into their seats.

She reminded parents that kids under the age of 2 need to be in a rear-facing car seat in a five-point harness, and reiterated how lucky she was that her husband had sent her the photo.

“I can’t even begin to imagine how different the outcome could have been,” she wrote. “I truly believe that the reason my family is at home sitting on the couch with a pair of crutches instead of down at the hospital is because of my annoying nagging mom voice.”

She’s not into shaming, either—just helping.

“There are millions of people out there riding around with precious cargo who genuinely don’t know that their child could be in a compromising position. And if that were my child, I would want someone to clue me in!”

We would too. Brush up on car seat safety to make sure your car seat is installed correctly and your child is strapped in safely.