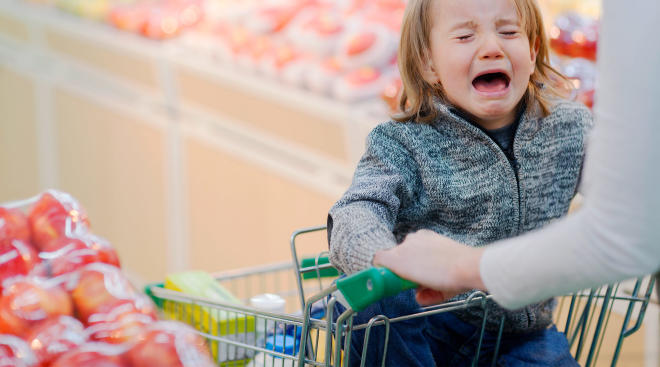 Hell hath no fury like a toddler in the middle of a major meltdown.

No matter what type of parenting style you have, nothing prepares you for a toddler meltdown. While not all toddlers have tantrums, it’s more common than not for a toddler to throw a tantrum at one point or another. So it seems a little silly to judge a parent whose kid throws a fit in public. We’re all in this together, remember?

Australian blogger Krechelle, of EightAtHome, was the witness to one of these meltdowns while grocery shopping with her kids. While at the supermarket, she heard the dreaded wail coming from another aisle. “This child was screaming so loud that naturally people were staring,” she says. Her heart immediately went out to the parents who had to quash this mini-meltdown in public.

“His parents were sternly but quietly trying to contain his octopus limbs and put them into the pram without hurting him, without loosing their s*it,” Krechelle says. “There was sweating and grunting and shaking of heads. They were doing well, they almost had it.”

But while some, like Krechelle, were rooting for the parents on the sidelines, not all shoppers felt the same.

“That’s when I heard it. A mum said to her 8-year-old daughter quite loudly ‘well clearly that child gets everything he wants and has never been taught a thing In his life,’” the blogger recounts.

Krechelle was livid. No one has the right to judge parents based on one quick interaction that all goes down at the most inconvenient time. Plus, moms should support and encourage one another, not tear each other down.

“We’re meant to be part of the club—the mum’s club,” Krechelle says. “She had betrayed that club, and not only had she shamed that mum, [but] she was teaching her daughter that judging people out loud, making people feel bad [for] a split second of there life was okay.”

As the saying goes, if you don’t have anything nice to say, don’t say anything. “Don’t stare. Don’t roll your eyes. Don’t make comments to your impressionable kid. Move along,” the mom advises.

Viral Post Nails How Society Sets Moms Up for Failure

You Know the Exact Type of Parent You’ll Be (Until You Have Kids)
Article saved.Go to My Saved Articles
Article removed.