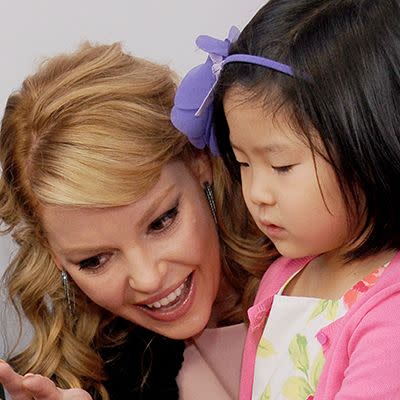 Tonight, Katherine Heigl makes her return to network TV. And she isn’t the prom-dress-sobbing, LVAD-wire-cutting Izzie Stevens you know and love from Grey’s Anatomy. Nope; this time Heigl appears as a badass CIA analyst solving the mystery of her husband’s death on NBC’s  State of Affairs.

In real life, though, Heigl’s day-to-day routine isn’t so fast-paced and mysterious. In fact, the 35-year-old lives on a quiet Utah ranch with husband Josh Kelley and their two adopted girls — Naleigh, 5, and Adalaide, 2. And in honor of National Adoption Month , we’re circling back to her story.

Heigl grew up with an older adopted sister from Korea, Meg. “I wanted my own family to resemble the one I came from, so I always knew I wanted to adopt from Korea,” she told Parent and Child Magazine. “We have talked about having biological children as well, but we decided to adopt first. I just wanted to be a mom. So however we do that, it’s fine with me. I’d like to adopt again.”

And again they did. After adopting Naleigh from Korea in 2009, they adopted Adalaide — as a newborn — from Louisiana in 2012. And the second time around was pretty serendipitous. “My lawyer called and said, ‘There’s a birth mother and she’s due in four weeks. She’s all yours if you want her!” Heigl told Jay Leno. “So I had to talk Josh into that one. He thought it was going to be a few years and that we were going to end up with more a 9- or 10-month-old.”

While bonding didn’t come as naturally with Naleigh as she’d hoped, Heigl never questioned her decision to adopt."[Naleigh] felt really comfortable with Josh and they bonded quickly. It was harder for me," she said. “Our social worker told us that it’s pretty typical for kids to react differently to their new mother. It was a struggle for me because all I wanted to do was bond with her. But it takes time for a child to trust this new situation and to trust you. My advice is don’t be discouraged. The reward is so great.”

What about the bonding between Naleigh and her baby sister? “We brought [Adalaide] home, and right away Naleigh was like a little mommy,” Heigl told Good Housekeeping. “She’d say, ‘No, no. You’re not holding her right.’ Or, ‘She needs to eat again.’ I’d be like, ‘Would you back off? Just give me a minute!’”

Regardless of whether or not she has biological children down the road, Heigl says her kids will absolutely be loved the same. “Anyone who doesn’t have experience with adoption wonders, does love for a child come through DNA? I knew it didn’t. My mother had biological children and an adopted child and said it made absolutely no difference. They’re yours.”

It always has been, and always will be, family first for the actress. But with her big return to TV, we’re excited to see Heigl back at her other job. Oh, and did we mention that Heigl is one of the executive producers of State of Affairs? Okay, maybe she’s kind of a badass in real life after all.