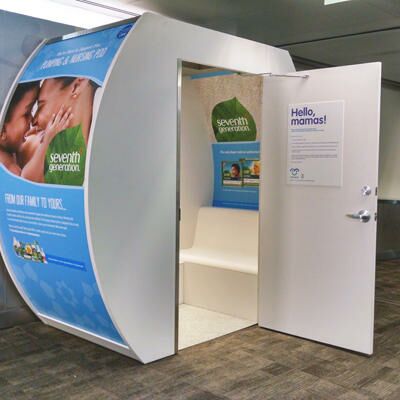 The pods made their debut on Thursday, May 7, in Terminal B at Liberty Newark International Airport and in LaGuardia Airport’s Central Terminal Building. The freestanding booths, designed by Mamava, are large enough to accommodate luggage and a stroller. They include outlets and a fold-down table for a breast pump and comfortable, cushioned seating.

While this is great news, New York airports are actually behind the times when it comes to accommodating breastfeeding. A 2014 study found that while 62 out of 100 airports surveyed reported being “breastfeeding friendly,” only eight of those actually met the requirements of having a private space with a chair, table and electrical outlets other than a bathroom. Soon afterwards, Chicago Midway created a whole room dedicated to nursing. Dallas Love Field, Phoenix Sky Harbor International Airport, Minneapolis-St. Paul International Airport and Milwaukee’s General Mitchell International Airport soon followed suit with similar breastfeeding-friendly stations.

Worried about bringing that milk you just pumped on the plane? TSA guidelines do allow you to bring more than the 3.4 ounces typically allotted for liquids; you’ll just have to let an officer know at the beginning of the screening process. Breast milk and formula will typically be X-rayed.