“He has so much fun doing it and such a big, animated personality.”
ByNehal Aggarwal
Associate Editor
PublishedMay 2020 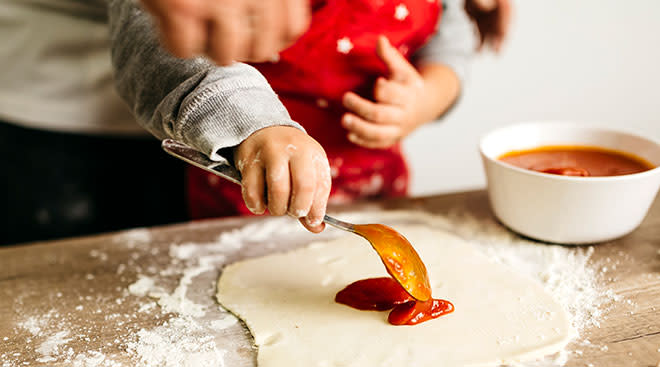 Looking to add some more cuteness into your day? Check out the latest culinary star taking over the internet: one-year-old chef Kobe.

Chef Kobe and his adorable, but functional cooking videos are slowly going viral on social media—his Instagram page (which is run by his parents) has over 1 million followers. That’s more than renowned chefs like Jose Andres, whose restaurants have won several Michelin stars. His videos feature everything from macaroni and cheese and pizza to lamb chops and lemon herb salmon, as well as a good amount of baby talk. You can tell the little chef loves to eat, as the ingredients often end up in his mouth rather than the pan.

Ashley Wian, Kobe’s mom, explains her son already has a big interest in cooking—and quite the sophisticated palate. “He has so much fun doing it and such a big, animated personality, I decided to record it to share originally with friends and family. I wanted them all to see his excitement in the kitchen and also illustrate all the things he’s learning," she told Today Food. "Kobe had 100 different foods by the age of one. People loved seeing him try new foods when we started at six months, so it then evolved into him preparing those foods.”

His current favorites? Blueberries and bananas. But he’s not picky and usually is happy to try any dish at least once. His favorite dishes to make, Wian tells the outlet, usually involve cheese because he gets to eat it while he cooks. (Touche, chef Kobe.) However, he does also like making recipes his followers suggest, including menemen, which is a Turkish dish that’s made with eggs, tomato, green peppers and various spices.

Wian is thrilled her son is able to bring joy to others during these difficult times and says several parents have reached out saying chef Kobe inspired them to get their own little ones involved in the kitchen, too.

“I love that this quality time with my son turned into something inspiring for the world. These silly videos of us cooking together turned into something we never imagined!” Wian told the outlet. “There are so many benefits to cooking…so many lessons, practical skills and memories can be made.”