Babies Can Differentiate Parent’s Hug From a Stranger’s, Study Says

“What surprised us as scientists is how little we know about hugging.”
ByNehal Aggarwal
Associate Editor
PublishedMay 2020 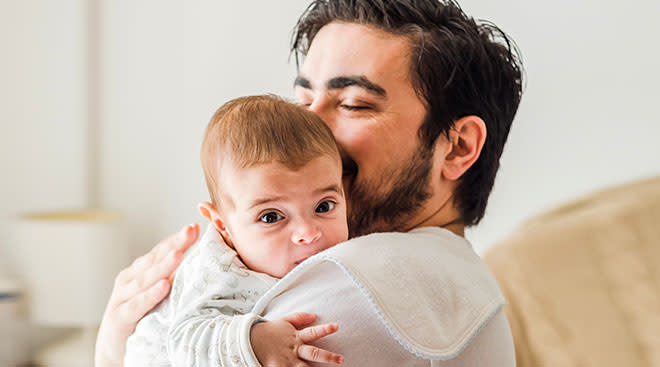 It’s no surprise that parents love holding baby and that baby finds being held by mom or dad soothing. But, according to a new study, some embraces spark more comfort than others in babies as young as four months old—and a big part of it has to do with who’s holding them.

A study published in the journal iScience last month looked at the heart rate responses infants younger than a year old have during hugs, tight hugs and holds. The researchers also looked at what happens when a female stranger, rather than a parent, hugs the baby. They found that babies as young as four months experienced a slower heart rate when hugged rather than held, specifically from their parents, indicating that they were able to differentiate a hug from their parents vs. a stranger.

Researchers believe this contact could play a big role in bonding between parents and their kids. “Like most parents, we love to hug our children. We also know that children love to be hugged by their parents. But what surprised us as scientists is how little we know about hugging,” first author of the study Sachine Yoshida of Toho University in Tokyo, Japan stated in a news release. “The infants older than four months showed a high increase ratio of heartbeat intervals during hugging by their parents than by female strangers,” Yoshida said. “Parents also showed a high increase ratio of heartbeats intervals by hugging their infants. We found that both infants and parents come to relax by hugging.”

The researchers calculated heart rate responses based on something called R-R intervals (RRI) on the electrocardiograms. RRI is essentially the time between specific waveforms that measure the electrical activity of the heart. Increased time in between these waveforms points to a slowed heart rate.

According to the release, the researchers were expecting a hug to turn a baby’s potentially fussy mood into a better one. Instead, they found that calming effects due to the hug were only apparent in babies that were neither crying nor fussy.

While more research is needed, the researchers believe their findings may help parents to better understand their babies before they can speak and help to enhance their bond.