All the more reason to be a good person.
Save article
ByStephanie Grassullo
Associate Editor
PublishedFeb 2019 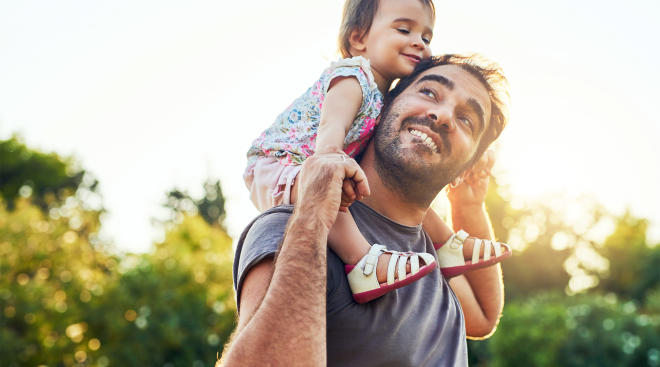 You’ve probably thought about whether baby will have your nose or baby blues, but physical traits aren’t the only thing your little one can inherit from you. There is an “underlying genetic factor” that influences personal beliefs and moral characteristics, according to new research from Penn State.

“A lot of studies have shown a link between parenting and these virtuous traits, but they haven’t looked at the genetic component,” study researcher Amanda Ramos says. “I thought that was a missed opportunity because parents also share their genes with their children, and what we think is parents influencing and teaching their children these characteristics may actually be due, at least in part, to genetics.”

The researchers used data from more than 700 pairs of siblings—including identical and fraternal twins, full siblings in divorced and non-divorced families, half sibling, and unrelated siblings—and their parents. They hoped that by including siblings with a wide variety of relatedness, they would discover both genetic and environmental factors that influence traits.

“If identical twins are more similar than fraternal twins, for example, it’s assumed there’s a genetic influence,” Ramos says. “Including multiple degrees of relatedness can give you more power to disentangle the genetic influences from the shared environment.”

Data was first collected during childhood and then again when they were young adults. Researchers measured “parental positivity,” including responsiveness and giving praise, as well as “parental negativity,” like the amount of arguments or yelling. The participants were also measured for their level of responsibility and awareness at different stages of life.

While positive parenting did lead to more responsible and conscientious kids, the link was stronger in siblings who were more closely related. Researchers say the results suggest that these traits are partially genetic.

“Essentially, we found that both genetics and parenting have an effect on these characteristics,” Ramos says. “The way children act or behave is due, in part, to genetic similarity and parents respond to those child behaviors. Then, those behaviors are having an influence on the children’s social responsibility and conscientiousness.”

At the end of the day, of course, every person will help shape their personality on their own.

“Your genes are not totally deterministic of who you are,” Ramos says. “Genes simply give you a potential. People still make their own choices and have agency in shaping who they become.”