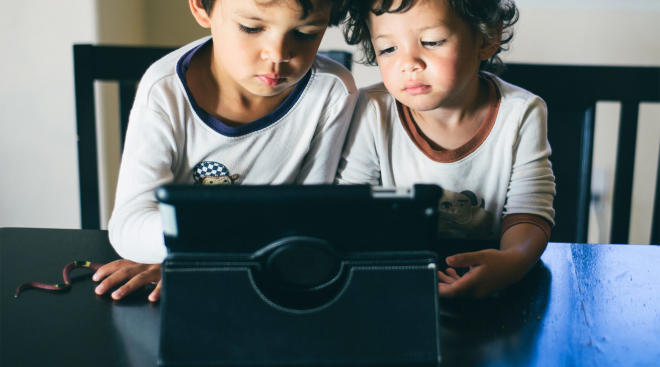 We already knew that too much screen time isn’t the best thing for baby (or us, for that matter). But a study pinpointed a specific consequence: delayed speech development in toddlers.

At the 2017 Pediatric Academic Societies Meeting, some striking findings were announced concerning a relationship never before examined: the effect of screen time on speech development. In a study involving nearly 900 children, parents were asked to report the amount of time their child spent using screens in minutes per day at 18 months old. On average, 20 percent of kids spent 28 minutes a day. Researchers evaluated this against a variety of things involving speech development, including whether sounds or words were used to get attention or help, the ability to put words together and the number of words spoken.

The conclusion was alarming: Every additional 30 minutes of screen time per day was linked to a 49 percent increased risk of “expressive speech delay,” which involves problems using sounds and words to communicate. The study did not, however, find any link between use of a handheld device and other areas of communication, such as gestures, body language and social interaction.

These guidelines come with the stipulation that screen time should be a collaborative learning experience.

"What’s most important is that parents be their child’s ‘media mentor.’ That means teaching them how to use it as a tool to create, connect and learn,” said Jenny Radesky, MD, FAAP, lead author of the new media policy statement on infants and toddlers, said in a press release.

Looking for ways to encourage your little one’s speech development? Check out these tips.