Toddler Recites Elements From The Periodic Table For Ellen DeGeneres 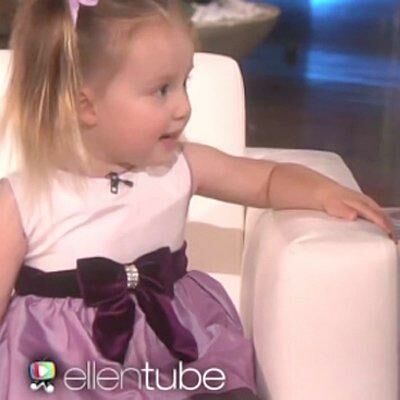 Prepare to be amazed by Brielle, a 3 year old, purple-loving, pigtail-wearing cutie who took some time out of her busy toddler schedule to drop by The Ellen DeGeneres Show and recite some elements from the periodic table. You know, just a normal childhood activity.

“She’s either really smart or just a complete show off,” Ellen said as she introduced Brielle and her mom Carrie, from Salinas, California. Aside from knowing the entire periodic table of elements, Brielle explained (in one of the most adorable voices imaginable) that she also knows all of her states and capitals, all the countries in Europe _and _Africa, and also the presidents – her favorite being Barack Obama, since he was president when she was born.

Brielle’s mom explained that they got Brielle flashcards of the elements in April, and though they rarely ever practice them, Brielle was able to learn so quickly. Though she isn’t able to read yet, Brielle told Ellen, “I’m sounding out words.” In the presence of such an unbelievably intelligent and accomplished toddler, Ellen then blurted out what we’re all thinking: “You’re making me feel bad about myself."

As Ellen pulled out some periodic flashcards of her own to put Brielle to the test, it became clear just how amazing Brielle’s talent was. Not only was she able to immediately identify some of the more obscure elements, such as Strontium and Tantalum, but she also relayed some fun facts.

Did you know Phosphorus is “a chameleon element” and can “burn underwater?” Like Brielle said, “Isn’t that crazy?”

How does she do it? According to Brielle, “My little brain just remembers.”

We expect great things from this one. Check out the full video below.

9 Ways to Celebrate Yourself This Mother’s Day (and Why You Should)
Article saved.Go to My Saved Articles
Article removed.
Name added. View Your List