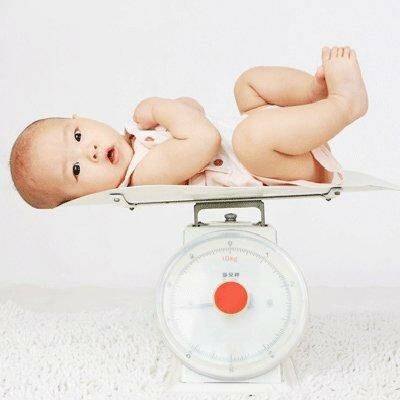 Why are doctors worried?

Women delivering big babies didn’t just start happening. In the past three decades, there’s been a 15 percent to 25 percent increase in babies weighing 8 pounds, 13 ounces or more in developed countries. The report, featured in the medical journal  The Lancet, also noted that the developing world is even starting to see an increase in bigger babies. They found that 15 percent of babies born in Algeria were born at more than 8 pound, 13 ounces. In places like China, 13.8 percent of babies were born big.

They’re also concerned with rates of maternity obesity. In the U.S., rates of maternal obesity are so high that doctors have actually begun intervening, delivering baby before they grow to be too big.

What are the risks for mom?

Your doctor has probably told you how much weight gain you should aim to gain during pregnancy. (If you don’t know, check it out here.) But what if you overdo it? Well, a new study by the March of Dimes suggests that being overweight before and during pregnancy can lead to serious health problems for both mom and baby. “New research is showing that if a woman is overweight while pregnant, her baby is more likely to be overweight,” says Alan R. Fleischman, MD, medical director of the March of Dimes. Experts also say that by getting pregnant at a healthy weight, you can lower the risk of preterm labor and birth defects.

Babies that are born way too big at birth are at risk for shoulder dystocia , which means that their shoulders have grown way too big (bigger than baby’s head!) to travel safely through the birth canal. With shoulder dystocia, it means that they can get stuck under their mother’s public bone during delivery. When babies get stuck, they can end up with fractured bones and the moms can end up with trauma and tearing.

There’s also the rising rates of obesity to consider, and the higher rates of gestational diabetes that come with delaying childbearing. Bigger babies often result in a more complicated delivery.

In the case of Jasleen (the 13 and a half-pound baby girl born in Germany), her mom suffered from an undiagnosed case of gestational diabetes, which commonly leads to overweight babies at birth. If Jasleen’s mom had been diagnosed, she could have taken preventative measures during her pregnancy.

What are the risks for baby?

A baby born to an overweight mother can develop health risks later on in life, including developing insulin resistance, high blood pressure and high cholesterol. Baby can have a higher chance of getting heart disease and diabetes.  They’re also 35 percent more likely to die before the age of 55, according to a large Scottish study. They are also 29 percent more likely to go to hospital as a result of stroke, angina or heart attack.

Babies born to moms with diabetes often have some of the high blood sugar (which is found in mom) flowing through their placenta and into baby. That, in turn, forces the baby’s pancreas to pump up insulin production, which can leave babies with low blood sugar after they are born. And the effects, doctors know, are long-term. They’re not just struggling with their weight, their blood pressure, their high cholesterol, heart disease and diabetes just for the time being. They’re struggling with those conditions forever. Babies born of a bigger size are also at a greater risk for cancer.

What the precautions you can take?

Doctors have tried to encourage pregnant patients who are obese to gain very little weight during pregnancy — and are even working on a clinical trial that keeps blood sugar low in pregnant women.

More importantly, scheduling regular checkups and appointments with your OB throughout your pregnancy will help keep your doctor (and you!) aware and prepared for any pregnancy-related health conditions that could end up harming baby.

Did you workout during your pregnancy?