Be ready when the hives or itchies strike, and know what amounts of Benadryl to give safely.
facebook
twitter
copy link
email
save
ByErin van Vuuren
Updated July 14, 2017

Snoop in any smart mom’s medicine cabinet and you’ll find a bottle of diphenhydramine—better known by its brand name, Benadryl. There’s regular Benadryl, and then there’s Children’s Benadryl, which is made with a lower-strength formula specifically for kids. For generations, this trusty over-the-counter antihistamine has helped to dry up snot, calm angry baby rashes, quiet sneezes and diffuse a slew of other pesky symptoms that erupt with allergies. It can produce a range of side effects, including making kids super-sleepy (or, surprisingly, crazy-wired). But if used judiciously, it can be Mom’s best friend. Here’s what you need to know about when and how to give the correct Children’s Benadryl dosage to get your child feeling better faster.

The Right Age for Children’s Benadryl

“Is Benadryl safe for babies?” is a question pediatricians hear all the time. The short answer is no. In fact, it’s not recommended for children younger than 2 years old. “Under the age of 2, antihistamines are largely untested, and safe dosage ranges have not been standardized,” says Natasha Burgert, MD, a Kansas City–based pediatrician and author of the health and parenting website KCKidsDoc.com.

Even when they’re a bit older, toddlers ages 2 to 5 should only use Children’s Benadryl if directed by a doctor. “I worry about the effects Benadryl can have on breathing, especially in young children,” says Wendy Sue Swanson, MD, a pediatrician at Seattle Children’s Hospital who blogs at Seattle Mama Doc. “Response to Benadryl is inconsistent between kids and can be dangerous. Plus, the sedating effect from antihistamines could be stronger than you’d want.” If your pediatrician does recommend the antihistamine for your 2- to 5-year-old, be sure to confirm with him or her the correct Benadryl dosage—and write it down! Once your child is 6 or older, it’s okay to follow the Children’s Benadryl dosage guidelines on the bottle.

The Right Reasons to Use Children’s Benadryl

We’ve all heard about parents craftily using a Children’s Benadryl dosage to put a kid to sleep on a long flight—but unless your physician recommends it, don’t do it. “Medication should be used to treat medical conditions,” Burgert says. “‘I’d like my kid to sleep on the plane’ is not a medical condition.” Besides, Benadryl doesn’t make all kids sleepy. Some children actually get wired. “The last place you want to be with an unexpected or undesirable medication side effect is on the airplane at 35,000 feet,” Swanson says.

That said, there’s still an array of ailments that Children’s Benadryl is safe and effective for. Essentially, it’s an allergy medication, a symptom reliever for everything from seasonal and mild food allergies to insect stings, Burgert says. Here’s what symptoms it can help:

• Drippy noses. There’s a reason why doctors suggest Children’s Benadryl for nasal allergies. It helps itchy, runny or sneezy little noses—often due to hay fever or other upper respiratory symptoms—feel almost like normal again. But because of its potentially serious side effects, such as significant sedation, Benadryl is best as a short-term solution. If your child has persistent allergy issues, ask your doctor about other over-the-counter allergy meds, like Zyrtec or Claritin, which are non-sedating and safer for long-term use. Better yet, find and control the source of the problem, whether it’s the pet cat or a need for more frequent dusting.

• Itchy red skin. Your child’s doctor may also recommend Children’s Benadryl for rashes and hives. “It’s good for relieving the itchiness that accompanies hay fever and eczema,” Swanson says. If a rash isn’t itchy and you aren’t seeing other concerning symptoms, it may disappear by itself without the need for medicine. Contact your doctor if you aren’t sure or if the symptoms persist.

• Bug bites. Another common use for Children’s Benadryl? To help treat insect bites and stings, Burgert says. We’re all familiar with those red, itchy bumps that often appear after a bug bite. When kids get these mild reactions, Children’s Benadryl can reduce some of the swelling and itching.

What about using Children’s Benadryl for a toddler cold? While allergy and cold symptoms can be similiar, relying on Benadryl to treat a cold won’t really work. That’s because antihistamines target only histamine responses, and cold symptoms are a reaction to viruses. (Sometimes it can be tough to distinguish between the two: If your child has a fever or aches, it’s probably a cold. Loosen snot with saline drops, and suck it out with a bulb syringe or NoseFrida). “Some families use Benadryl for its snot-reducing properties due to allergies or cold symptoms,” Burgert says. “Benadryl may reduce the amount of snot that is produced; however, the drug itself doesn’t help the virus that causes a cold from going away any faster.”

• First, find your child’s weight (in pounds or kilograms) in the top rows of the dosage table, then scroll down for the type of medication you’d like to use in the column on your left. The appropriate Children’s Benadryl dosage is in the box where the two axes meet up.

• Now check the strength in milligrams (mg) on your bottle’s label. Obviously, this table applies only if the value on your label matches the strengths listed here. If they’re different, follow the instructions on the label. Make sure to give a dose only every four to six hours, and never more than six doses in 24 hours, unless otherwise directed by your child’s doctor. To be extra cautious, call your pediatrician to double-check your dosage and timing.

• Use only the measuring cup provided (not a spoon). This will prevent you from inadvertently giving your child the wrong amount. 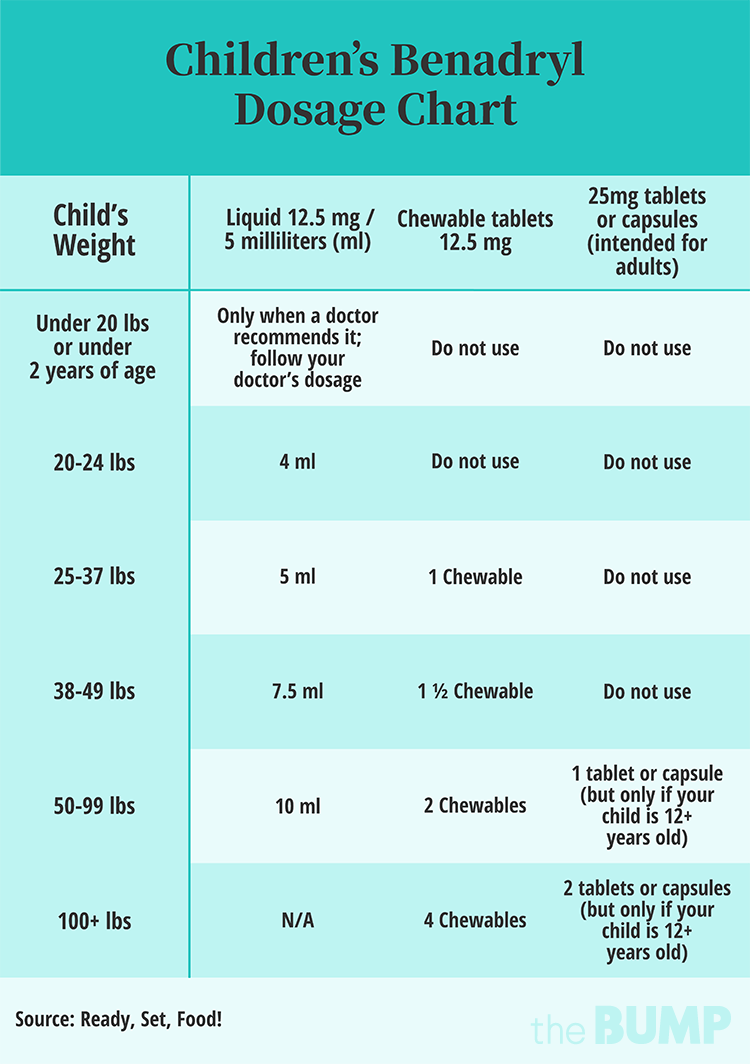 • Make sure you’re using only one diphenhydramine product at a time. In other words, if you’re giving her a liquid dose, hold off on giving her a chewable tablet as well or using the topical version on her skin. It’s also smart to opt for diphenhydramine-only treatments, unless otherwise recommended by a doctor—multi-ingredient medicines carry a higher risk for accidental overdose and might contain active ingredients your child doesn’t need.

• Finally, pay attention to side effects. Besides drowsiness, common issues might include dry mouth, dizziness, headache and stomachache. Children’s Benadryl can even thicken bronchial secretions, tighten their throat or, in rare instances, cause issues with the nervous system, heart or blood. If you notice something isn’t right, seek medical help immediately. It’s also wise to take your child to the doctor if her allergy symptoms keep her from school or other normal activities, or if the symptoms are long-term and aren’t alleviated with medication after two days. 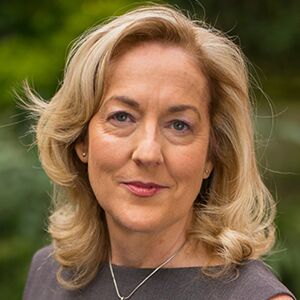