Many parents swear by this sleep-training method, but it’s not for everyone. Here’s what you need to know before going all in.
Save article
ByKorin Miller
UpdatedMar 2021 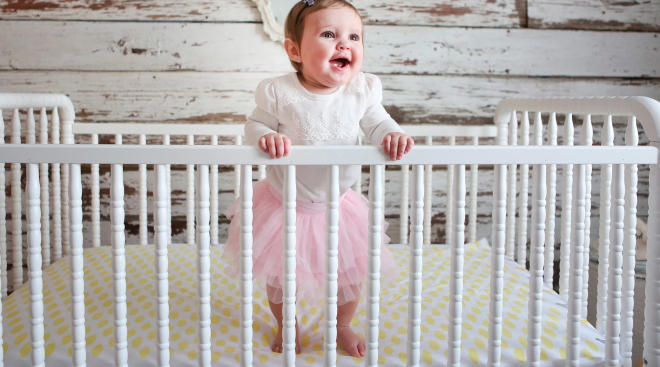 Photo: The Locket Photography
We have included third party products to help you navigate and enjoy life’s biggest moments. Purchases made through links on this page may earn us a commission.

When you have a baby, you’re never going to be as well-rested as you were at pretty much any other time in your life. While most parents are okay with that for a while, there comes a point where you’re ready for some solid sleep already. Unfortunately, many babies are just fine with waking up during the night until you teach them otherwise. That’s why many parents turn to the Ferber method, a form of sleep training that encourages babies to sleep through the night.

You’ve probably heard of the Ferber method at some point but might be hazy on the details. Here’s what you need to know about Ferber sleep training, so you—and baby—can start catching more Zzz’s.

What Is the Ferber Method, Exactly?

The Ferber method is a “cry-it-out” method of sleep training, based on the 1985 best-selling book Solve Your Child’s Sleep Problems by Richard Ferber, MD. In the book, Ferber discusses the importance of sleep associations. “The conditions that help a baby fall asleep at night are the same conditions required to put a baby back to sleep after night wakenings,” says Whitney Schutzbank, MD, MPH, a pediatrician at the MassGeneral Hospital for Children in Boston. Ferber encourages parents to remove those conditions—which baby learns to associate with sleep, like feeding or rocking—so that babies will learn to put themselves to bed without their parents’ help.

Of course, babies would rather have your help falling asleep, so they’ll often cry at bedtime or in the middle of the night while learning to put themselves to bed. “According to Ferber, the fastest and most efficient way to teach your children to sleep through the night is to let them cry at these times,” Schutzbank says.

When to Start the Ferber Method

Sleep training (whether it’s the Ferber method or any type) is not recommended for babies until they’re 6 months old, says Jeffrey Bourne, MD, a pediatrician at Providence Saint John’s Health Center in Santa Monica, California. “They need to eat in the middle of the night before then,” he explains. But it’s also best to sleep-train before your baby is a year old. “After a year, they have a whole bunch of habits and patterns set and it can be harder to break them,” Bourne says. Regardless of age, always talk to your doctor before starting a sleep-training program. This way, you can be sure baby is growing well and can sleep through overnight feedings.

The Ferber method lays out a very specific, progressive regimen for getting baby to sleep at night. If baby has been sleeping in your room until this point (which is advised by the American Academy of Pediatrics for at least the first six months), it’s time to move them into their own room in a crib. Then, start Ferber sleep training.

• Create a bedtime routine for baby. Read them a book, sing to them or rock them—but make sure they’re still awake when you put them to bed.

• Put baby to sleep in their room. It should be dark and quiet, Schutzbank says.

• Check in at regular but increasingly longer intervals if baby cries. Generally, Ferber sleep training recommends checking on baby after three minutes, then five minutes and then 10 minutes on the first day. On the second day, check in after five minutes, 10 minutes and 12 minutes. That goes up to 10 minutes on day three and increases from there, up to 20 minutes for the first check-in on day seven. This process is known as “gradual extinction.” During those check-ins, reassure baby by patting them gently without picking them up, then leave the room before they fall asleep, Schutzbank says. Soon enough, baby should get the hang of it. “Usually after about five to seven days, the interval of time spent crying is much shorter, and your child will be putting themselves to sleep and sleeping for much longer periods of time at night,” Schutzbank says.

The Ferber method consists of a very specific set of instructions, outlined in the book (see chart below), and it’s most effective when it’s followed exactly as described, Schutzbank says. But, as Bourne points out, it can also be personalized if you feel the precise time frames aren’t right for your family. Just be aware that changing things up—particularly checking on baby more frequently— may prolong the process.

Ultimately, though, every baby is different. I myself tried the Ferber method with my baby when he was 11 months old, but it became clear after the first night that checking in on him only upset him more. So my husband and I let him cry. It took only two nights before he was sleeping through the night, and each crying episode lasted only about five minutes. Still, we were glued to the monitor each time. It’s really hard to hear your baby cry and not go to him, but he’s been a great sleeper ever since.

Critics of Ferber sleep training say that letting baby cry without comforting them could be emotionally scarring, but there’s no science behind this claim. “There have been no studies that show negative long-term outcomes for babies who underwent sleep training with the Ferber method versus those who did not,” Schutzbank says. “This method can be extremely helpful for overtired parents and children to allow everyone to get the sleep they need.”

Bourne agrees. “Crying itself doesn’t hurt babies,” he says. In fact, a 2016 Pediatrics paper reported that among families who tried “gradual extinction,” there was no significant difference in stress levels in the infants (as measured by stress hormone levels in the saliva) or in measurements of parent-infant attachment, compared to the control group. Plus, those babies were eventually able to fall asleep 13 minutes earlier than the non-sleep-trained babies, and they woke up significantly less often.

Sound like a dream? Then you might want to try it. Once your child’s pediatrician says it’s okay to start Ferber sleep training, make plans with your partner and figure out the best time to start. The Ferber method works best when you start at a time when everyone in your family is prepared to have a few nights with less sleep, like over the weekend, Schutzbank says. Decide in advance how you’ll handle the crying episodes because, of course, there will be plenty—as Laura, a mother of two, discovered. "The first night was awful. Literally no sleep was had by anyone,” she says. “It’s extremely tough to see your baby crying, but knowing in the back of your mind that it’s best for everyone got us through. The second night was still rough. The baby was up less but it was still awful. But on the third night, he slept solidly until 5 a.m.!”

With Ferber sleep training, moms who’ve done it, like Laura, agree that consistency is key. “As long as you’re committed to going the course with the method, it’s wonderful and works amazingly well,” she says. “If you’re going to be wishy-washy, then I’d highly discourage this method. You have to be firm in your decision and not waver.”

And know that sleep will be in your very near future, Schutzbank says.

Whitney Schutzbank, MD, MPH, is a pediatrician at the MassGeneral Hospital for Children in Boston. She earned her medical degree from Tulane University School of Medicine and specialized in newborn medicine.

Jeffrey Bourne, MD, is a pediatrician at Providence Saint John’s Health Center in Santa Monica, California. He recevied his medical degree from University of Washington and has been in practice for moe than 20 years.

When Do Babies Sleep Through the Night?