How Breastfeeding Changes as Baby Gets Older

So you and baby figured out this whole breastfeeding thing (awesome job!). But it won’t be exactly like the newborn period forever. Now what? 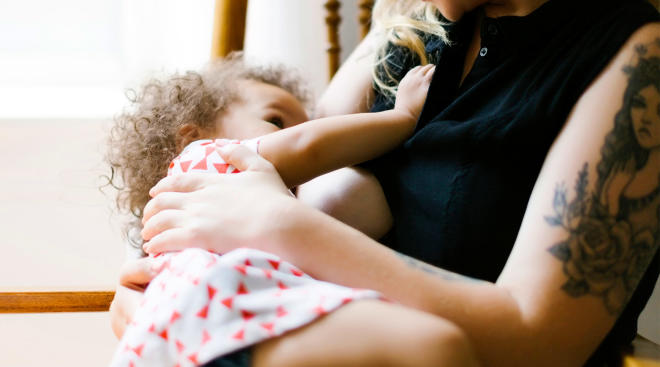 Good news if you feel like all you did during the newborn period was feed your son or daughter: Once baby gets the hang of nursing, he or she will probably get better at it, which usually translates to faster. “A newborn feeding can take 20 to 40 minutes, but by the time they get to be three months old, they often cut way back on feeding duration,” says Nancy Mohrbacher, IBCLC, FILCA and author of Breastfeeding Answers Made Simple: A Guide for Helping Mothers. “It could become 10 to 20 minutes, depending on the baby.” Chances are baby will still be nursing every two to three hours, but doing it more efficiently, so you two will likely quickly move on to the next activity.

You’ll worry less about how much baby is drinking

In the beginning, you probably were always freaked out that baby might not be getting enough milk and secretly wishing you had ounce markings to gauge baby’s intake, the way bottle-feeding moms do. But the awesome thing about breastfeeding is that baby knows when he or she’s hungry, will let you know and will stop when he or she is full. “Your baby is signaling to your body to make the right amount of milk with the right amount of nutrients, vitamins and antibodies according to baby’s age,” says Gina Ciagne, CLC for Lansinoh Laboratories. As long as baby’s healthy and gaining the right amount of weight, he’s getting plenty of milk. Unless you’re pumping, you don’t really have to count anything!

If you are pumping during the day while you’re at work, don’t freak out if you see the amount you pump drop, especially after baby starts on solids. That’s normal. “As they start solids, they need less,” says Mohrbacher.

It’s not just about the milk

Babies don’t just nurse for nourishment; they also get comfort and closeness from it. And that can become more and more obvious as baby becomes older and is exposed to a whole bunch of new emotions and experiences. Breastfeeding can stop a tantrum, soothe a toddler who’s just fallen or give you two bonding time before you leave for work in the morning. “Breastfeeding is an all-purpose mothering tool,” says Mohrbacher. Of course, if you schedule baby’s feedings, you might just be providing food, but our experts say feeding on demand can offer great emotional benefits.

Baby may get more easily distracted

Around 6 to 10 months, baby will be nursing along and then suddenly pull off to point and squeal at a plane going by overhead. You’ll get him or her latched on again, and then two minutes later, he or she’ll whip off again to watch big brother or sister run by with a ball. Baby will be moving around a lot more (usually rolling, crawling and cruising), and you may find that he or she is more interested in exploring the world around him or her than focusing on feeding when you want him or her to. To limit distractions and the stop-and-go feeding time, Ciagne recommends finding a quiet setting for feedings, like baby’s nursery or another not-so-chaotic place.

You may get bitten

When you see baby’s first tooth break through the gums, you’ll probably be really excited, but a little bit nervous about getting the old bite-down. (Luckily, your baby isn’t the one from Twilight.) “Not every baby bites,” says Mohrbacher. “For the ones who do, it’s usually because their gums get sore from teething, and baring down on something makes them feel better.” She recommends giving your baby a cool washcloth or teething toy before a feeding, so baby gets any gnawing out of his or her system. If baby does manage to give you a nibble, stop the feeding right away so baby knows that behavior isn’t going to fly. Eventually, he or she’ll get the message.

Solids will gradually take over

Around six months, baby’s pediatrician will likely give you the go-ahead to start solid foods. The process will be gradual—you’ll introduce one new food at a time, and baby will take some time getting used to eating and trying different flavors. Over time, breast milk will take a backseat to solid foods, but in the beginning, it’s still the most important part of baby’s diet. “It’s good practice to nurse first and then offer baby solids, so they get enough milk and uses the solids as practice,” says Ciagne.

Other milks get transitioned in

Around age one is when many parents start incorporating other milks, like cow’s milk and soy milk, into their baby’s diet. You might have to get baby used to drinking from a cup or to the flavor of the other milk, so just like with solids, this will probably be a gradual process. And it doesn’t mean that’s the end of your breastfeeding relationship (see below).

There’s no such thing as “extended” breastfeeding

The American Academy of Pediatrics recommends exclusive breastfeeding until six months and then continuing at least until the age of one, and many parents misinterpret that into meaning that they’ve got to stop by baby’s first birthday. “The benefits of breastfeeding don’t magically stop at 12 months,” says Ciagne. Only you are the correct judge of the amount of time is right to continue breastfeeding. If you and baby are still enjoying it, keep going. If you truly believe it’s time to stop—no matter the age—then that’s the right choice for you.

People may think you’re crazy—you’re not

Other than the cover of Time magazine, you don’t see moms of older babies and toddlers nursing them in public very often. And it’s not because no one’s doing it or that the moms are trying to hide something. It’s just that it’s easy to tell a toddler to wait until you get home, and because he or she isn’t nursing as often anyway, it might happen to only be going on in the morning or night, when no one else is around. So when you tell people you’re still nursing your child—whether he’s nine months or four years—some might be shocked. But believe us, there are plenty of moms like you still doing it. Chat with them on our Breastfeeding board and get more breastfeeding tips and advice.

How to Deal With Formula Pushers

11 Things You Didn’t Know About Breastfeeding