What Kind of Dad Will He Be? the Zodiac Knows

Whether he’ll be a strict disciplinarian, a soccer dad or both, the answer is written in the stars. 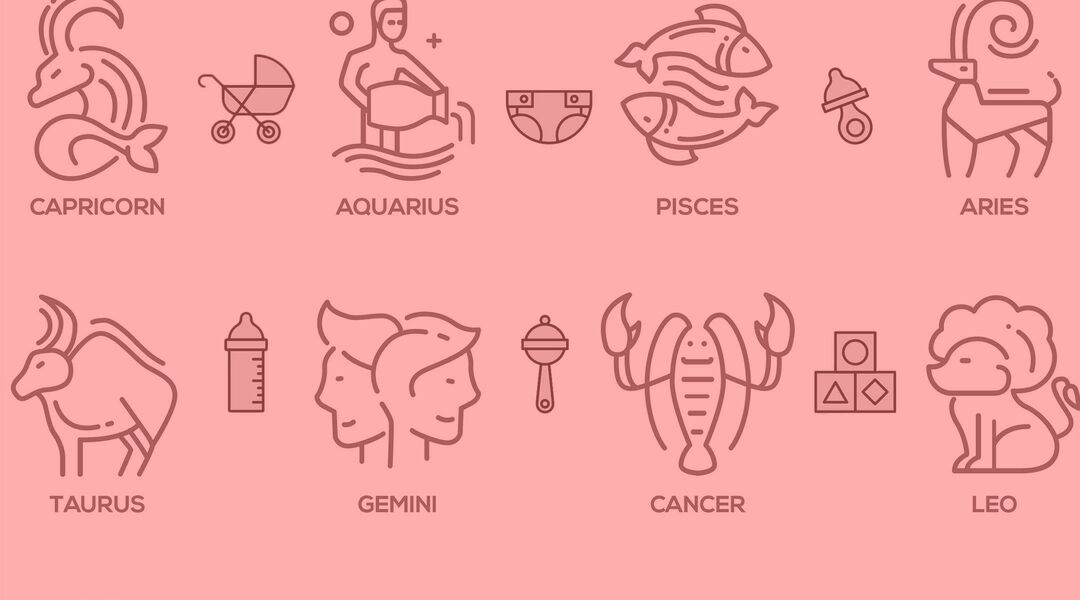 Your sun and stars? He’s now your baby’s daddy! But what kind of father will he be? Turns out, the Game of Thrones endearment is quite fitting: The sun and stars, and they way they were aligned at the time of your partner’s birth, can have quite the impact on his personality—at least if you believe in the power of the zodiac. And, really, who hasn’t peeked at the horoscopes at some point for a little guidance?

That’s why we asked Angel Eyedealism, longtime astrologer and a veritable institution in New York City’s East Village, to break it down for us. Each sign, she says, has its unique strengths. For a precise reading, she’d take into account a guy’s natal chart, which includes the time of day he was born. But for our purposes, she zeroed in on the sun sign—which, even by itself, tells us plenty.

Aquarius (January 20—February 18)
“The mad scientist or the wacky inventor, the Aquarius father is offbeat and bohemian,” Angel says. "But he’s reliable—he always shows up on time. So he’s not be a deadbeat dad, just an _off_beat dad.” Also a bonus? “He brings those genius IQ genes into the mix [for your children]!”

Kindred spirit: Gru in Despicable Me

Pisces (February 19—March 20)
“Ah, the classic musician!” Angel laughs. “Pisces bring compassion to the mix. They’re sensitive; they’re artistic. Just based on their sun sign, they’re not famous for their reliability. But they’re interesting, creative and artistic dads. You may just want a nanny or manny on hand to help with more down-to-earth matters.”

Aries (March 21—April 19)
“Aries men like to be the manly men. They like to be in charge, and they love, love, love sports,” says Angel. “They take their kids to the ballpark, hiking; they motivate them to be the best they can be, to be No. 1.” But, she adds, they’re not very patient. “You’ll want someone around who is more calm and patient for balance,” she says. “But in terms of being exciting and dashing? That’s Aries.”

Taurus (April 20—May 20)
“Stable and steady, Taurus is the tortoise that wins the race,” Angel explains. “They’re calm and patient, so I would say that they make very good fathers. It’s one of the most stable signs. They are stubborn to a fault, for sure—it’s kind of their way. But they’re a “fixed earth” sign, so they’re very grounded. Not the most exciting, but very reliable.”

Kindred spirit: Milo Ventimiglia as Jack Pearson in This Is Us

Gemini (May 21—June 20)
“Gemini are the information supernova highway,” Angel says. “If your kid has a trivia game, the Gemini dad is going to jump right in. They know a whole lot about things nobody cares about— extraneous details are their stock-in-trade. So if your kid needs help with a crossword puzzle or an algebra equation, he’s your guy. They’re solution-oriented problem solvers.”

Cancer (June 21—July 22)
“Cancer dads are pushy about emotional issues,” Angel says. “But I would say that they make the best dads, because they’re actually very nurturing. They’re moody, but they’re loving. They love to stay home, but they’re also good in the business world, so they can support their family. Cancer men can be very passive, until someone is threatening their family—then they’ll pull out all the stops."

Leo (July 23—August 22)
Leo dads are great with kids because they’re big kids themselves. “The kid often has to calm them down from a temper tantrum!” Angel jokes. “But they love kids and kids love them because they are children at heart. Playfulness is the key adjective. They do have it in them to be very arrogant, but when it comes to kids, they love getting to relive their childhood.”

Kindred spirit: Bryan Cranston as Hal Wilkerson in Malcolm in the Middle

Virgo (August 23—September 22)
“Virgo dads can be a bit picky and fussy—they’re kind of control freaks—but they love having children. And they’re often very fertile,” Angel says. “They like discipline and organization—their kids have all their ducks in a row. They have good communication skills, because their ruling planet is Mercury, so they tend to be very intelligent and good with business. They cluck and they fuss over you, which may come across as criticism, but that’s actually how they show they care.”

Libra (September 23—October 22)
The Libra dad is all about beauty in life. “Libras are often attractive and affluent, because their ruling planet is Venus. They’re the best in relationships and very intellectual,” Angel says. That said, she notes, “They have trouble making up their mind, which is classic Libra—indecision is their downfall. But they’re very fair-minded. They’re the least egotistical of the signs, because they like to err on the side of good taste and manners. He’ll definitely take the kids to see something artistic or musical—Libras tend to be musical as well.”

Kindred spirit: Russell Crowe as Jor-El in Man of Steel

Sagittarius (November 22—December 21)
Angel notes that by nature, the Sagittarius dad is the least committal of all the signs. But, she says, “If they do decide to be a dad, they’re going to be a fun dad. They love to take their kids camping and hiking and traveling.” She adds, “They’re ruled by Jupiter, which has to do with higher education”—so college is a must. “They tell their children to pursue their dreams, their ideals, to be ponderers and wanderers.”

Capricorn (December 22—January 19)
Last but not least, there are the Capricorns, who Angel says tend to be “very serious people. They’re cardinal earth, so they’re very practical. They teach their children to be good with money, to be ambitious, to work hard. And they do not spoil their children. They’re definitely disciplinarians. Capricorn is a success sign, but the kind of success you earn, so they teach their children that life isn’t easy. But they also provide their kids the skills to go out and succeed.”