So much of pregnancy is all about the mom-to-be. Here's how to make your partner feel a part of the journey too. 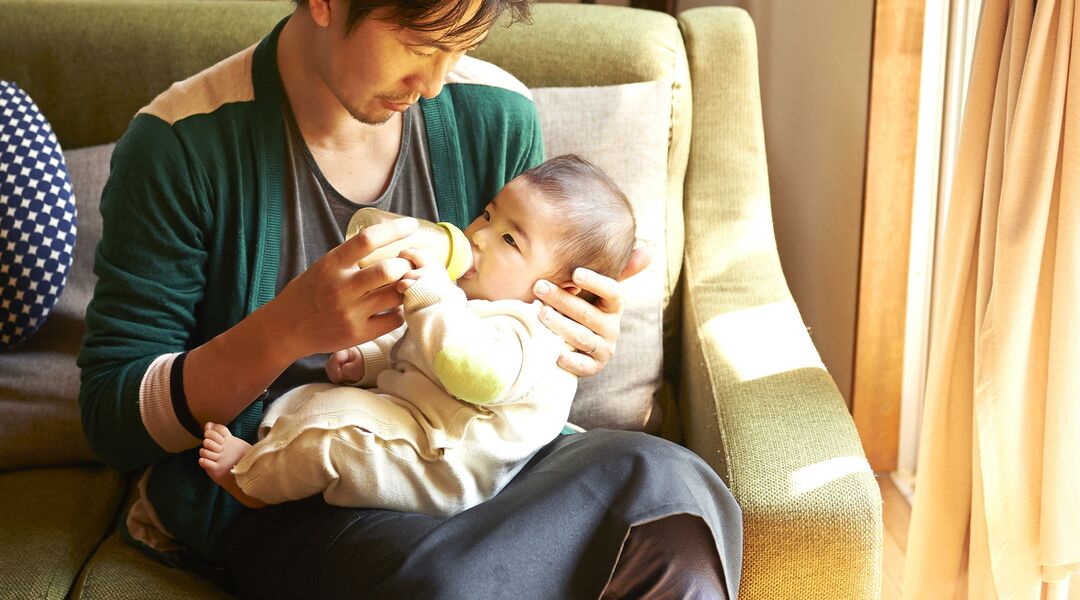 For moms-to-be, pregnancy brings about so many physical and emotional changes. Your back is aching and your feet are swollen. You’re crying at the sight of chocolate bars. Even your belly button is looking different these days! But if you’re doing this thing with a partner by your side, remember that the pregnancy isn’t just about you. Here are a few ways to make dad-to-be feel part of the pregnancy process and get involved every step of the way.

Make Sure The Announcement Is About Both Of You.
It’s not like you weren’t planning on including him in announcing your pregnancy, but if you’re the one deciding how to do it, and he’s barely mentioned, he won’t be into it. So have him with you on Facetime when you break the news to your parents, tag him in your post when you make it Facebook-official, or schedule a photo shoot of you two together for a printed “We’re expecting!” card.

Put OB Appointments On His Calendar.
Obviously it’s most important to plan your doctor’s visits around your schedule, but the easiest way to get your man feeling like he matters is by getting him to hear that heartbeat and see that sonogram. Since some appointments are bigger than others (like your first ultrasound and the mid-pregnancy ultrasound, when the gender is usually revealed), make sure to schedule those for when he can make it. Heck, send him an iCal or Outlook Calendar invite, so he knows it’s important he’s there too.

Make Sure He Gets A Dadchelor Party.
Your girlfriends may be planning a baby shower for you, but what about him? This is where the dadchelor party comes in. Give some of his closest guy friends some not-so subtle hints that they should throw him a man-centric event. It can be in a backyard, his man cave or at his favorite pub. Let them plan whatever it is they like to do, whether it’s playing poker or watching their favorite football team. No women allowed.

Register Together.
Make sure you’re a baby registry team—and don’t act like a control freak! While there are some big, important purchases that you may have strong opinions about (the crib, car seat and stroller come to mind), there are some registry items that are really no biggie. For example, say he wants some baby mittens you don’t think are cute (and you may never need), but what’s the harm in letting him put them on the list? Register for them regardless, so he doesn’t feel like his wants are always getting shot down.

Let Him Make Decorating Decisions.
Even if you think your guy has a horrible sense of style (like those Bob Marley posters and hanging high school football jerseys), you should still let him in on the nursery decorating process. After narrowing it down to a few prints or patterns that you love, ask him which he likes best. We can totally picture him bragging to his friends about how he designed the nursery!

Tell Him What To Do.
We don’t mean that you should boss him around, but some first-time dads feel a little unsure of what exactly their new role is supposed to be. So if you want him to change more diapers, tell him. If you’re dying for him to take over the cooking tonight, hand him the mixing spoon. Who cares if you’re not crazy about his meatloaf?

Avoid Hovering.
We know you’re cringing every time your guy holds, feeds, burps or bathes baby differently than you would. But as long as he’s not doing anything that could be dangerous, keep quiet. He won’t ever get the chance to figure out how he’s comfortable caring for baby if you never give him the chance to try things out. Congratulate and help him along—don’t coach.

Give Him Some Of The Fun Duties.
We know there are certain things you loathe doing (like changing the 4 a.m. diaper), but resist the urge to stick him with every single one of them. Instead, give him a fun activity, like singing baby a lullaby or giving baby a bath. These aren’t just things he’ll enjoy doing, they’re things that will help him and baby bond.

Get A Manicure.
This is a win-win—you’ll be treating yourself, and he’ll get time alone with baby, without deferring to you on the tough stuff. You’ll come back feeling refreshed (with gorgeous nails, to boot!), and he’ll be one step closer to feeling more confident in this daddy thing.

Take A Class.
We know, it’s tough to find time to get away! But if you’re taking a regular drawing, swimming or fitness class, you’ll have a regular schedule of getting out of the house (and feeling like your old baby-free self for a little bit). And your man can have some quality time with baby.

Prep Your Relationship for Baby

“He Said WHAT In the Delivery Room?”