Sonogram vs. Ultrasound: What’s the Difference?

Lots of moms-to-be are fuzzy on these terms—so we asked the experts to bring you a clear picture of the sonogram vs ultrasound.
Save article
ByChristin Perry
UpdatedAug 2017 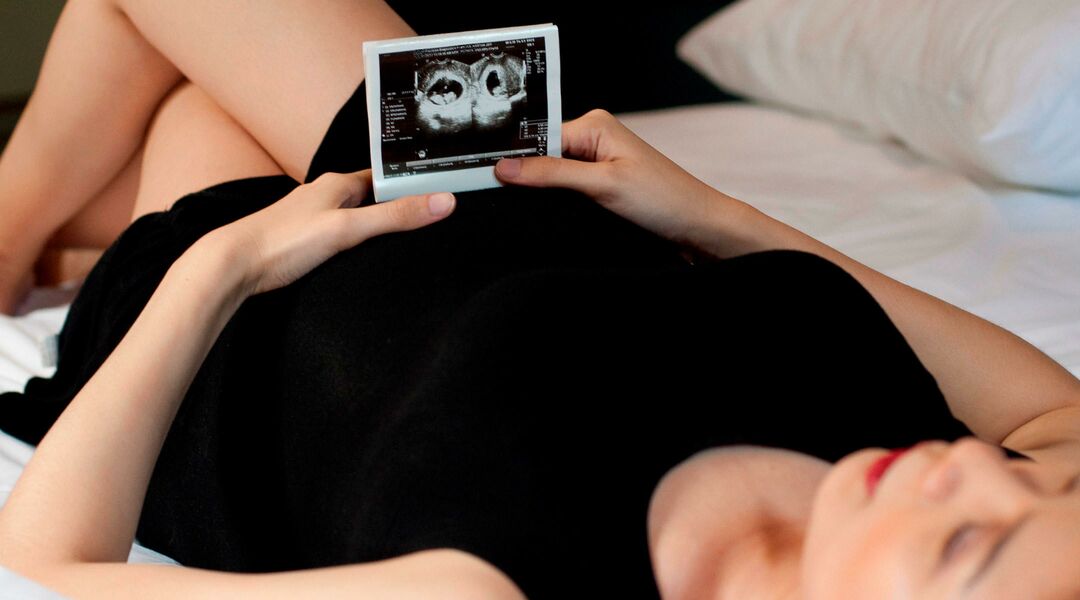 When you’re expecting, getting an ultrasound is one of the most anticipated events of your entire pregnancy. After all, it’s during this exam that you’ll see the first adorable images of your tiny fetus. And you’ll probably even get to bring home baby’s first picture. But if you’ve heard your doctor or someone else refer to your exam as a sonogram, you may be feeling a bit confused about the difference between a sonogram vs ultrasound. We’re here to clear up the confusion and help you prepare for that exciting doctor’s visit, because we know you’re counting down the days!

What Is an Ultrasound?

An ultrasound is a simple, painless and noninvasive procedure that presents no risk of harm to you or baby. It’s used as a diagnostic exam that allows your doctor to study your growing fetus and track his development at different stages during your pregnancy.

During your ultrasound, you’ll be asked to lie flat on your back while a cold gel is spread across your belly. Then, the doctor or ultrasound technician will run a probe back and forth through the gel, and the first images of baby will appear on a screen. The exam is as simple as that. See, we told you it was painless!

How does an ultrasound work?

When an ultrasound is performed, internal parts of the body are transformed into images on a screen through the use of a wand or probe. According to Mara Rosner, MD, assistant professor with the department of obstetrics and gynecology at NYU Langone Health in New York City, the ultrasound probe transmits high-frequency sound waves. These sound waves bounce off tissue and then back to the transducer probe. The computer then interprets those sound waves to create the image you see on the screen.

What is an ultrasound used for?

With ultrasound technology, your doctor can view your growing fetus and determine things like size, number of fetuses, gestational age and gender.

She can also look for any obvious abnormalities, such as spina bifida or cleft palate. Measurements to compare your fetus against others at the same gestational age help ensure that baby is growing and developing properly. By studying baby’s vital organs, like her brain and heart, your doctor can check for proper development and blood flow to those regions.

For the soon-to-be mom, an ultrasound is a great tool that allows a closer look at baby, and it can be an incredibly moving experience to see baby for the first time. There’s no better bonding experience than realizing you’re growing another human being—and seeing her grow with each prenatal visit.

If you’re wondering, “Does ultrasound use radiation?” rest assured that it doesn’t. In fact, because they don’t pose the same risks as x-rays, ultrasounds are becoming increasingly more common in medicine today. Aside from keeping tabs on a pregnancy, doctors can use ultrasound to view things like organs, muscles, heart valves and blood vessels. Ultrasound technology can scan for potential tumors to determine whether or not they’re benign, and it can be used as a guide during procedures like biopsies or amniocentesis (more on that one later).

From the moment you see those two pink lines, you’ll likely start wondering when do you get your first ultrasound? It depends on your doctor; some doctors will perform a quick ultrasound at your first pregnancy appointment (which is typically at about 8 weeks). If yours does, don’t expect to see too much this early on—an ultrasound at this stage is mostly for “dating” the pregnancy, or determining a rough due date.

The early pregnancy ultrasound
So how early can an ultrasound detect pregnancy? If you’re at least five to six weeks pregnant, you’ll probably see the beginnings of an amniotic sac and a fetal pole, which will become baby’s body. If your pregnancy is at least six to seven weeks along, you may even get to see a heartbeat. At this stage of the game, though, there’s no reason at all to worry if you don’t see a heartbeat; it could be that your pregnancy is a few days earlier than you think. Because of the high degree of uncertainty at this stage, many doctors skip the ultrasound at this early stage altogether.

These days, there’s little to no preparation for ultrasound necessary. For an early ultrasound, you may be asked to drink water and hold off on urinating for about an hour before your exam. That’s because a full bladder makes it easier to see inside the uterus. Further, Rosner advises that you avoid large meals prior to your exam. “It can make it more uncomfortable to lie flat.”

When you reach what’s called the combined first trimester screening, sometime around weeks 11 to14, you’ll have the option to have a nuchal translucency screening, or NT scan. Although not quite as exciting as the anatomy scan that you’ll get around 20 weeks, this may be your first “real” glimpse at baby. During this exam, the ultrasound tech will take careful measurements of the back of baby’s neck. These measurements, along with blood work, will allow your doctor to determine the likelihood of baby having a chromosomal abnormality, such as Down syndrome or trisomy 18.

If your NT scan results indicate that baby has a higher possibility of a genetic disorder, you can opt to have a more invasive test called an amniocentesis. During an amniocentesis, the doctor uses ultrasound to guide a long, thin needle into the amniotic sac. A small amount of fluid is removed and studied to give a more complete picture of baby’s health.

The midpregnancy ultrasound
Once you reach the middle of your pregnancy, sometime between weeks 18 and 22, you’ll finally get a chance to have a detailed ultrasound, where you’ll likely be able to see baby from all angles—and get a glimpse at those private parts too! At this ultrasound, gender determination is probably top of mind for you, but it may not be for your doctor. While it may be tempting to ask her or the ultrasound tech to try to determine baby’s gender or get the cutest picture possible, remember that the technician has an important job to do. Explains Rosner, “When performing an ultrasound, doctors are looking for anatomical problems and other issues beyond gender. For parents it can be really fun, but it is still a serious medical exam.”

The late pregnancy ultrasound
How many ultrasounds during pregnancy you’ll get depends on your doctor and your situation. Most women have one early on, another at the beginning of the second trimester, and the anatomy scan about halfway through. However, there are a few situations in which additional ultrasounds may be necessary during the third trimester. This late pregnancy exam is often called a biophysical profile, or BPP. “This exam identifies amniotic fluid levels, fetal gross and fine movement and breathing motions,” says Shar La Porte, a certified nurse midwife at Midwifery Care NYC. Here are a few situations that might call for an ultrasound, especially as you approach your due date:

• If you’re having a high-risk pregnancy. In this case, your doctor may want to perform additional ultrasounds to monitor your pregnancy more closely. Advanced maternal age (meaning you’re over age 35, especially if this is your first pregnancy), incompetent cervix (weak cervical tissue, which might lead to premature birth) and a history of miscarriage are all factors that can cause your doctor to consider your pregnancy high risk.

• If you’re concerned about lack of fetal movements. If you’ve been doing those kick counts diligently but something seems off to you, your doctor will likely perform a latepregnancy ultrasound to ensure that baby is just fine in there. At this stage, an ultrasound may clue your doctor in on potential issues with the umbilical cord.

• If baby is in a breech position. If baby’s not yet in that head-down position, or if you were diagnosed with placenta previa (in which the placenta is covering the uterus), more frequent ultrasounds could help track baby’s progress.

• If baby is past 40 to 41 weeks of gestation. The doctor may want to take a peek to ensure fetal well-being.

What Is a Sonogram?

As we mentioned earlier, the difference between a sonogram vs ultrasound is that the ultrasound produces the sonogram. So when your ultrasound exam is over, you’ll probably be handed several pictures of baby growing inside you—the sonogram images. These grainy black-and-white images will become one of the most important keepsakes of your life, and you’ll want to show them off to everyone. The word “sonogram” can roughly be translated as “sound writing,” because the images are produced by sound waves.

If you’re wondering how to read a sonogram, you’re not alone. The images can be difficult to interpret, and we’ve all got that one friend who swears she can’t make out anything at all. Ultrasound technology continues to advance, however, and, believe it or not, the images have actually become much clearer over the years. And depending on what your medical facility offers, some ultrasounds allow you to see baby in 3-D or even 4-D (which means you can see baby moving in 3-D) instead of just the flat images produced by 2-D ultrasound technology.

How to read a sonogram

Here’s where using the words sonogram vs ultrasound really makes a difference—you can read only the sonogram, not the ultrasound.

Songrams are relatively simple to read once you’re armed with a few tips. First, the solid colors represent hard tissue and the gray colors, soft tissue. The black areas indicate amniotic fluid. Second, orient yourself by looking for the most obvious parts of baby, like her head or an arm.

You may be wondering how to tell in a sonogram the gender of baby, but you likely won’t have to. Most ultrasound technicians will not only reveal baby’s gender if you ask them to, but will also mark it on the picture and give you a print out. In general, though, the genitalia of baby girls appears as three white lines (which is the clitoris between the two labia). In baby boys, you’ll quite often see a very obvious penis as long as your ultrasound was performed late enough in your pregnancy.