BABY IS AS BIG AS
ASPARAGUS!

Can you believe all five of baby’s senses are fully developed at 31 weeks pregnant? Baby's also getting smarter! In the meantime, you might actually feel a little… dumb. You’re not! It’s just that many moms-to-be find themselves acting absentmindedly during the third trimester. Some say that “pregnancy brain” isn’t a real thing, but can you honestly think of another time in your life when you’ve had as much on your mind as now? We’re guessing no. That right there is enough of a reason to be so forgetful at week 31 of pregnancy.

At 31 weeks pregnant, baby is as big as a bunch of asparagus. Baby's about 16.2 inches long and weighs about 3.3 pounds. Baby's getting so big, he or she's probably crowding your lungs, which is why you might find yourself winded on a normal walk up the stairs.

31 Weeks Pregnant Is How Many Months?

From week 31 of pregnancy on, you’re bound to feel a lot of the same symptoms you’ve already been experiencing. Some may get worse, and some may become bearable. Here are the most typical 31 weeks pregnant symptoms:

Trouble sleeping. It’s no wonder you can’t sleep when your back hurts, your belly’s contracting, you can’t find a comfortable position, oh—and you have to keep getting up to pee!

Your 31 weeks pregnant belly is getting in the way of everyday things like tying your shoes and sex. It’s even in the way of your usual swagger—have you started waddling yet?! 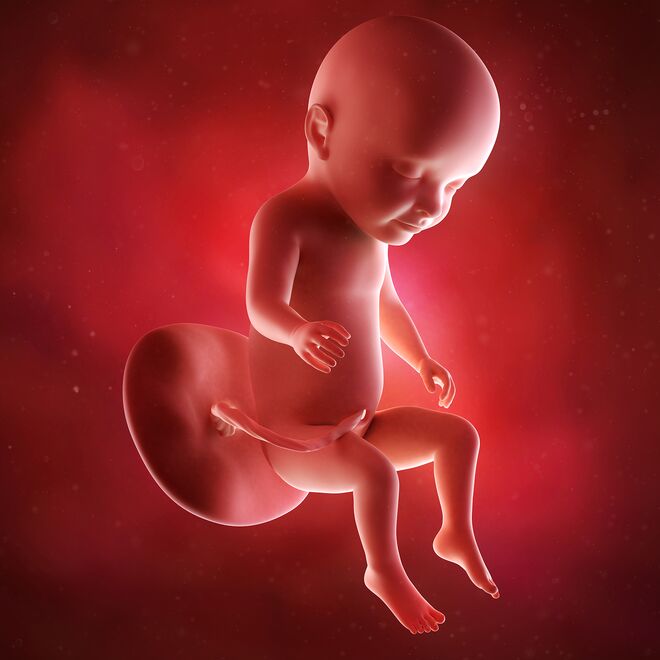 Your week 31 fetus is going through major brain and nerve development. His or her eyes are developing too—the irises can now react to light! (A little light does shine into your 31 weeks pregnant belly at times!) In fact, all five of baby’s senses are in working order.

Baby’s position at 31 weeks? Head down! At least he or she probably is. Your OB will check to see for sure at your next appointment.

Women who have pregnancy complications such as gestational diabetes or who are 31 weeks pregnant with twins may have a 31 weeks pregnant ultrasound to check in on baby (or babies). But if that’s not you, you’re off the hook this week.

We know, we know. You’re just dying to know what baby looks like inside your 31 weeks pregnant belly. Some curious parents-to-be choose to have a 3D/4D ultrasound done later in pregnancy—usually sometime between weeks 24 to 32. (So 31 weeks pregnant is the perfect time!)

In a 3D/4D ultrasound, you can see the entire surface of baby’s face in one picture. Yep, the picture is three dimensional. The fourth dimension is time—you get to see baby move on the screen in 3D. That means you may see your 31-week fetus blinking, thumb sucking, and maybe even smiling or frowning, and you’ll probably take home a video of it too!

There are medical circumstances that could call for a 3D/4D ultrasound at 31 weeks pregnant. But if your doctor doesn’t order one, you have the option of having one done at an independent imaging center. In that case, the 3D/4D ultrasound is an elective procedure, so your insurance won’t cover it and you’ll have to pay out of pocket for it.

They’re pretty cool to see though, so if you want one, and your doctor okays it, go for it! Aw, so cute!