The Pros and Cons of Baby Circumcision

Wondering how to weigh the risks and benefits of circumcision? Here, experts chime in on how to make the right decision for your family. 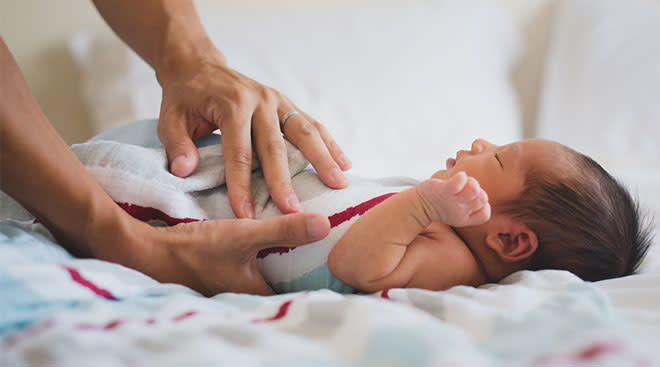 Of the many things we do for our kids that are painful, baby circumcision—the surgical removal of a newborn boy’s foreskin—is one of the most controversial and vexing. How badly will it hurt baby? How safe is circumcision? What are the long-term consequences?

For some, the decision to circumcise is easy. Many do it for religious beliefs, or because it’s what has always been done in their family. But for those wavering while weighing the pros and cons of circumcision—including the risks, benefits and current cultural worth—it helps to be informed. Here’s all you need to know about baby circumcision, so you can make the choice that’s best for your family.

Newborn circumcision—a procedure that dates back to ancient Egypt—involves cutting away the skin from the tip of a baby’s penis shortly after birth. While removing the foreskin once most likely had to do with hygiene and kicking off a baby boy’s entree into religion, baby circumcision has evolved over the past 100 years. Newborn circumcision has become more of a cultural norm in the US, where parents want sons to look like their fathers.

But changing demographics, recent opposition to infant circumcision and a few states eliminating Medicaid coverage for the practice have contributed to dropping circumcision rates in the US. According to the Centers for Disease Control and Prevention (CDC), from 1979 to 2010 the percentage of circumcised American male infants dropped from 64.5 percent to 58.3 percent, although it varies by region. Rates are higher in the Northeast (69.6 percent) and Midwest (68.8 percent) and lower in the West (40.2 percent), where circumcision isn’t very popular among the large, growing Hispanic population.

Why Are Babies Circumcised?

Many people circumcise their boys because they want them to look like Dad. Still, there can be other benefits to newborn circumcision. The CDC, the American Academy of Pediatrics (AAP) and the American Urological Association all validate baby circumcision and highlight its medical benefits. Infant circumcision can protect against various infections and some forms of cancer—but each organization stops short of recommending that all babies need the procedure.

“It’s a slightly recommended procedure in the US.,” says Cem Soykan, MD, associate chief of ChristianaCare Pediatric Hospitalists in Newark, Delaware. “The risks are small, the benefits are small, and the benefits are better than the risks—we think it’s a cultural practice and parents choose to do it because they want to.”

For many Jewish families, circumcision is the cornerstone of their newborn boy’s brit milah, the religious ceremony that establishes the child’s relationship with God. Certain sects view it as obligatory, while others do not. “I tell parents that your son is still Jewish in the Reform tradition even if he’s not circumcised,” says Sara Imershein, MD, an ob-gyn who is also a mohelet, a person trained in Jewish laws who provides circumcisions in private ceremonies. “I’m there for families who want to do it. Circumcision is safe, it’s not disfiguring and it does have substantial medical benefits. It’s an ancient tradition and there are millions of men walking around who are happy with their penises.”

When Do Babies Get Circumcised?

If your baby boy is born healthy, once he receives his vitamin K shot and you’ve filled out the consent form outlining the pros and cons of circumcision, he’ll be whisked away sometime in the first 24 to 48 hours after birth for the circumcision procedure. Some hospitals allow you or your birth partner to watch. If the pediatrician or ob-gyn carrying out the baby circumcision detects any anatomical abnormalities like undescended testicles or hypospadias (where the opening of the urethra is under the penis instead of at the tip), they will stop and refer you to a pediatric urologist, who might recommend that you hold off until any problems are taken care of.

As per custom, healthy Jewish males receive their newborn circumcision on the eighth day after birth. Traditionally, a mohel, a man trained in Jewish laws and circumcision, performs the rite. But today there’s a growing number of female ob-gyns and midwives who are also mohelets who can carry it out. “Nowadays, for a multitude of different reasons, people definitely feel comfortable with doctors and other medical professionals performing these procedures,” says Stephanie Langsam, MD, an ob-gyn and mohelet who performs circumcisions in hospitals and for Jewish ceremonies.

What Happens During the Circumcision Procedure?

The circumcision procedure is generally quick; it takes anywhere from 15 to 30 minutes depending on which technique is used. First, the doctor—either your ob-gyn or the pediatric hospitalist—will strap baby onto a board, securing his legs. “Strapping them down is quite uncomfortable and they tend to fuss when you do this,” says Soykan, who prefers to swaddle babies’ torsos instead of using arm straps.

Many doctors will give baby a pacifier dipped in a concentrated sugar-water solution, which research shows distracts babies pretty well from the discomfort. “It overwhelms their sensory system so that their perception of pain lowers,” says Patrick Clements, MD, a pediatric hospitalist and assistant professor of clinical pediatrics at Indiana University School of Medicine. “It’s like you distract the baby so much with that sensation of sweet that it erases their sensation for pain.”

Do babies feel pain during circumcision?

Sugar water aside, many parents wonder: Does circumcision hurt? Unfortunately, yes, it does—that’s why doctors usually administer a dorsal penile nerve block (which involves injecting lidocaine into the base of the penis) to numb the penis during surgery. “Ask your provider which anesthesia they use—if they say they use none, say ‘no thank you’,” says Soykan, noting that anesthesia wasn’t usually used on babies before 1999, when the AAP began recommending it. “If they say they use a topical cream, it’s fairly effective but ask if you can have the injectable medication.”

Once baby is numb, the doctor will clean the penis with alcohol then iodine, put down a drape and perform the operation using one of three clamping techniques common in the US: the Gomco clamp, the Mogen clamp or the Plastibell, a ring attached to the penis underneath its foreskin. The Gomco, with a metal bell that fits over the penis head under the foreskin and a flat metal clamp over the bell, is used by most hospitals. The doctor stretches the foreskin over the bell, then firmly crushes the skin (which squishes the blood vessels flat so they won’t bleed through, Soykan says, as opposed to cutting through the skin, which bleeds heavily and calls for a cauterizer) and uses a scalpel to cut it away.

At Jewish ceremonies, mohels tend to use the Mogen clamp, a flat metal device with a narrow opening through which the foreskin is pulled; it allows for a significantly quicker procedure.

Circumcised vs. Uncircumcised: Pros and Cons of Baby Circumcision

Still questioning whether the pain of infant circumcision is worth its medical advantages—which are relatively minor given that it protects against conditions that don’t commonly occur? You’ll want to weigh the pros and cons of circumcision.

The AAP recognizes these benefits of being circumcised vs. uncircumcised:

The risks of baby circumcision are pretty slight too:

Serious injuries are very rare, occurring in approximately .2 percent of procedures (and usually those done outside of a hospital settin) according to one study. “A scalpel that slips, a doctor having a stroke during the procedure—you have a better chance of winning the lottery than a partial amputation of the head of the penis,” says Soykan. “The ugliest risk? Parents not happy with how the penis looks after, if it looks more like a turtle neck vs. a head sticking out through a t-shirt.”

It’s clear there are some benefits of circumcision, but ultimately after weighing the circumcision pros and cons, it’s entirely up to you. Remember: Newborn circumcision simply involves removing baby’s foreskin. You may choose to do it for cosmetic purposes, hygienic reasons, the medical benefits or to fulfill a religious tradition. Still, it’s important to know that infant circumcision isn’t medically necessary in most instances, so make the decision that’s right for you and your little one.

Cem Soykan, MD, is the associate chief of ChristianaCare pediatric hospitalists in Newark, Delaware, where he consults on sick children in the emergency department and cares for hospitalized children and newborns in the nursery. He earned his medical degree from the University of Virginia School of Medicine.

Sara Imershein, MD, MPH, FACOG, is an ob-gyn and mohelet. She is an associate clinical professor in the department of obstetrics and gynecology at George Washington University School of Medicine and Health Sciences and a professorial lecturer in the department of prevention and community health at the Milken Institute School of Public Health at George Washington. She received her medical degree from Emory University School of Medicine.

Stephanie Langsam, MD, is a mohelet and ob-gyn at Main Line Health in Pennsylvania. She earned her medical degree from the Technion Israel Institute of Technology in Haifa, Israel.

Patrick Clements, MD, is a pediatric hospitalist and assistant professor of clinical pediatrics at Indiana University School of Medicine. He earned his medical degree from the University of Toledo.

What Happens Right After Baby Is Born?