BABY IS AS BIG AS A
LEMON!

Congrats! The end of week 13 is the end of the first trimester! We’re not just talking about getting through those work meetings without falling asleep (or puking!), we’re talking about how you’re now 1/3rd of the way through your pregnancy! At 13 weeks pregnant, you’ve grown a fetus that has vocal cords, teeth and even fingerprints (wow!), and you’ve probably kept this incredible news (mostly) secret while wishing you could shout it from the rooftops—or, at the very least, use it as an excuse for getting to work late.

Around week 13 of pregnancy, many parents-to-be start spreading the word that there’s a baby on the way. But know that there are no hard-and-fast rules about when you should divulge your secret. It could be after your next prenatal appointment, once you start showing or at a big family event where everyone will be gathered. Or maybe everyone already knows! That’s totally your call.

At 13 weeks pregnant, baby is as big as a lemon. Your 13-week fetus is about 2.9 inches long and weighs about .81 ounces, and proportion-wise, their head is now about 1/3 the size of the body instead of 1/2.

13 Weeks Pregnant Is How Many Months?

13 weeks pregnant is three months pregnant. This is the last week of the first trimester. (We can’t say it enough because it’s so great to be here!)

You might notice that around 13 weeks pregnant, your symptoms change a bit. You might actually be able to get through the day without nausea (if not now, soon) or feeling the need to nap. But you may be experiencing a few of these too:

Sorry, twin moms-to-be. If you’re 13 weeks pregnant with twins, you might still be experiencing some morning sickness and fatigue. That’s because twin moms can have more of the pregnancy hormone hCG in their systems. If your nausea and vomiting is super severe, definitely bring it up to your OB. If you’re able to hold down food and liquids but you’re still feeling ill, just wait it out a little longer.

Your uterus is now big enough that it’s growing up and out of your pelvis. That means you’re starting to actually look pregnant. Finally, right? You’re a third of the way through and you finally get to demand a seat on a crowded train!

Expect to look more and more pregnant from here on out, because pregnancy at 13 weeks calls for a weight gain increase. OBs recommend you gain weight in the healthiest way possible—that means slowly and steadily throughout your pregnancy. Here are the weight gain guidelines outlined by the American College of Obstetricians and Gynecologists (ACOG):

If you’re 13 weeks pregnant with twins:

Of course, you don’t want to stress yourself out about these numbers. What’s important is that you’re eating a healthy diet full of a variety of different foods, eating about 300 extra (nutritious) calories per day more than you did pre-pregnancy and getting plenty of exercise. 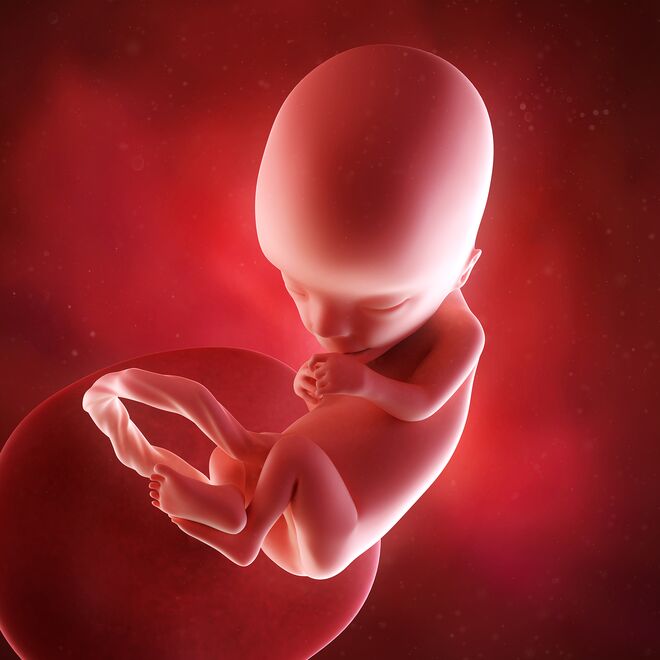 A 13-week ultrasound could detect baby’s sex, but since it can be pretty tough to make out little boy or girl parts, your doctor will probably wait until the mid-pregnancy ultrasound (around 18 to 22 weeks), when it will be much more obvious, to look and see whether you’re having a girl or a boy.

If you’ve chosen to have prenatal cell-free DNA testing, also known as non-invasive prenatal testing (NIPT), to screen for chromosomal abnormalities, you’ll be able to find out the sex when you get your results. Hey, at 13 weeks, you may already know! Oh boy! (Or girl!)