BABY IS AS BIG AS A
STRAWBERRY!

Hello baby bump! Now that you’ve reached 10 weeks pregnant, you may stop wondering when you’ll start to actually look pregnant, because it’s probably right around now! That’s why week 10 is a good time for a little retail therapy. While you shop, stock up on some new, looser clothes—and maybe your first round of maternity wear. Don’t go too crazy at the store though. As your body continues to change, you’ll want to pick up some more essentials along the way. Remember, you’ve still got seven more months of body changes.

During week 10 of pregnancy, baby is as big as a strawberry, measuring about 1.2 inches long and weighing about .14 ounces. Your 10-week baby’s body length will almost double in the next three weeks. Wow!

10 Weeks Pregnant Is How Many Months?

At 10 weeks pregnant, you’re about two months and one week pregnant.

Your 10 weeks pregnant belly is probably just starting to show. That’s because your baby is continuing his or her rapid growth and so your tummy has started to develop some extra curve. You still might not look pregnant to people you meet, but you might need some pants with a stretchy waistband and some loose-fitting tops right around 10 weeks pregnant.

Many doctors recommend gaining about three to five pounds during the first trimester for pregnant women of average BMI. So you’re right on track if you find yourself at 10 weeks pregnant having gained a few pounds.

If you’re pregnant with twins, your doctor may recommend you gain about a pound per week in the first half of your pregnancy, which means you could have gained about 10 pounds by the time you’ve reached 10 weeks pregnant with twins. But don’t worry if you haven’t gained that much weight, or even if you’ve lost weight due to morning sickness. You’ll hopefully be able to put weight back on during the second trimester when the nausea decreases. 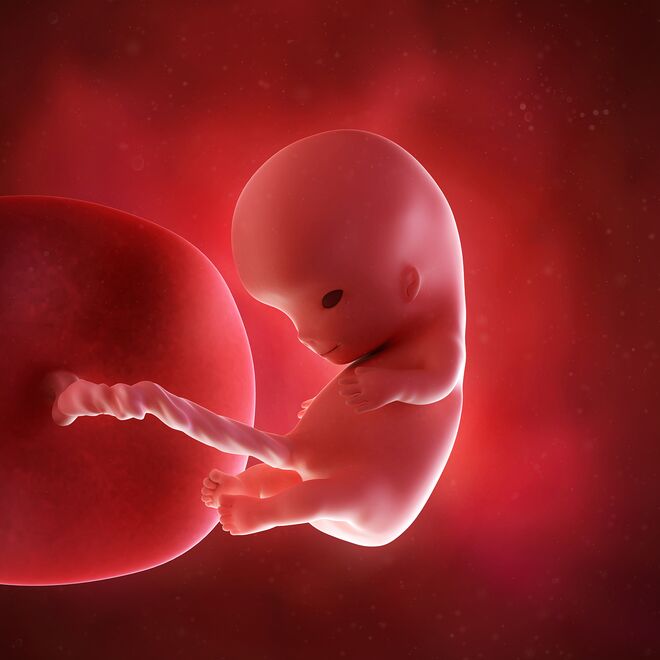 At ten weeks pregnant, baby has working arm joints, and cartilage and bones are forming. Your 10-week fetus’ vital organs are fully developed and they're starting to function. Fingernails and hair are starting to appear too! And can you believe that baby’s busy practicing swallowing and kicking inside your 10 weeks pregnant belly?

Ten weeks is an important time if you’ve decided to have some first trimester genetic testing. Genetic testing is optional; which ones you choose to get—or not get—is up to you, but a genetic counselor can help you decide based on your family history and risk factors.

The nuchal translucency screening (a.k.a. NT Scan) typically happens between weeks 10 and 14; it tests your fetus for risk of Down syndrome and several other chromosomal abnormalities. For it, you’ll have a painless ultrasound, and baby’s nuchal fold (back of the neck) will be measured for signs of abnormality. The NTS is typically done as part of a “First Trimester Screen” where your blood is tested and your risk is assessed based on the results of both the ultrasound and the blood test.

A cell-free fetal DNA test, also known as a non-invasive prenatal test (NIPT) is a blood test given at week 10 or later. It screens mom’s blood for signs of risk for Down syndrome, Edward Syndrome, Patau Syndrome, and other chromosomal abnormalities.

Other, more invasive tests—the CVS and amniocentesis—can be used to diagnose abnormalities as well. They’re typically performed if you have a higher risk of having a baby with a chromosomal abnormality, whether based on family history, risk factors, or NTS or NIPT results. The CVS (chorionic villus sampling), given between weeks 10 and 12, uses an ultrasound to determine the placenta’s location. Then, using ultrasound as a guide, the doctor either uses a speculum inserted into your cervix or a needle through your belly to collect cells from the placenta. Those cells are tested for genetic abnormalities.

If you opt for amniocentesis, you’ll schedule it for between weeks 15 and 20. Overwhelmed by all the first- and second-trimester testing?

Trust us; once you’re done with it, you’ll be able to concentrate on more fun to-dos.