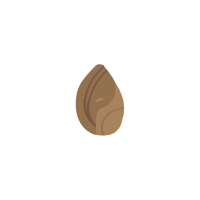 You’ve just been initiated to the pregnancy club! Week 5 is a common time for moms-to-be to find out they’re pregnant. That’s because by now you’ve probably realized you’ve missed your period and then thought, whoa—maybe I should take a test! Plus, at 5 weeks pregnant, heightened hormone levels may be giving you symptoms that are tough to ignore, like sore breasts, nausea and fatigue. For updates on what’s happening with you and baby throughout your pregnancy, sign up for The Bump pregnancy week-by-week newsletter emails.

Your week-5 embryo doesn't look like much more than a tadpole right now, but they’re already starting to form major organs (heart, stomach, liver and kidneys) and systems (digestive, circulatory and nervous).

How big is baby at 5 weeks?

At 5 weeks pregnant, baby is the size of an apple seed. Yep, your embryo is now measurable—though at week five of pregnancy, it's a wee 0.13 inches from crown to rump (a.k.a. head to bum)—and baby's gearing up for much more growth. In fact, in the next week they’ll almost double in size. Grow, baby, grow!

5 weeks pregnant is how many months?

At 5 weeks pregnant, you're entering your second month of pregnancy. Remember, most doctors start counting pregnancy from the first day of your last period. While many people think of pregnancy as lasting 9 months, it’s really 40 weeks long. If you’re counting four weeks to a month, that adds up to 10 months! Of course, some months have five weeks. That’s why many doctors avoid tracking pregnancy by month and refer to your progress simply by week.

If you don’t have a medical history that puts you at higher risk for pregnancy complications, you won’t likely have a 5 weeks pregnant ultrasound. Instead, you’ll just have to wait impatiently until your first prenatal visit, around week 8 or 9. We feel your pain!

When you do have your first ultrasound, the doctor or technician will measure baby from crown to rump and could adjust your due date based on baby’s size (which would change which week of pregnancy you’re in). You’ll have a slew of blood tests and urine tests to be sure you and baby are both doing fine. So while you’re totally amped up to see baby’s tiny fluttering heartbeat on the ultrasound screen, remind yourself you can wait a few weeks for the blood draws and peeing in a cup.

Is there a heartbeat at 5 weeks?

A heartbeat may be detectable between 5 and a half weeks and 6 weeks, but not always. That’s why, unless you have preexisting conditions or fertility concerns, most doctors wait until at least 8 weeks for your first ultrasound.

See their progress for yourself with our 3D interactive tool.

The pregnancy symptoms you feel at 5 weeks are just the beginning of the slew of changes your body is about to go through. No need to dread the entire pregnancy based on what’s happening right now: Many moms-to-be say the first trimester is the toughest, so think of it as getting the rough stuff out of the way early. In the meantime, take care of yourself and get plenty of rest, eat right and figure out ways to help yourself feel better. If you’re wondering what to expect at 5 weeks pregnant, here’s what’s most common:

Morning sickness gets all the attention, but aching breasts may actually be the most common symptom at 5 weeks pregnant.

This bad boy is so inaccurately named. Nausea in early pregnancy can happen at any time of the day, not just morning. And unfortunately, some pregnant moms feel queasy pretty much all day. In fact, if you’re 5 weeks pregnant with twins, you may be more likely to have severe morning sickness. Experiment with different strategies to find what helps you deal with the queasies best. Eating small, frequent meals is one good one. You might also try Vitamin B6, ginger capsules, special nausea-reducing lozenges or lollipops and acupressure wristbands.

At 5 weeks pregnant, it’s normal to want to nap in the middle of a board meeting, a dinner date, a… well, pretty much any time. You’re zapped from making a baby and there’s not much you can do about it except get some extra rest, do some light exercise and eat every few hours.

You might notice yourself having the urge to pee more often early in pregnancy. This symptom at 5 weeks pregnant is in part because your kidneys are actually expanding. (Whoa!)

Around 4 or 5 weeks, cramping could be a sign the embryo has implanted nicely into the lining of your uterus. Or it could be a sign your uterus is expanding and stretching your ligaments. If you’re feeling cramping at 5 weeks pregnant that’s severe or painful, call your doctor and get checked out to make sure it’s not a sign of a problem.

When you’re 5 weeks pregnant, spotting can seem scary, but a little blood on your underwear could also be a sign of implantation. You might also spot a bit after sex, since your cervix is more sensitive now that you’re pregnant. This is totally normal, but if you’re having something that’s less like spotting and more like bleeding at 5 weeks pregnant—or really, if you’re concerned at all—call the doctor.

Some moms-to-be who are 5 weeks pregnant feel no symptoms at all. Or it might feel like, at 5 weeks pregnant, symptoms come and go. And all of that is totally okay! Just because you’re not feeling sick or sore doesn’t mean there’s something wrong with the pregnancy. It just means you’re lucky!

The experience at 5 weeks pregnant can vary a lot from person to person, so it might be best not to expect anything specific, but to prepare for everything. If nothing else, you’re likely to feel more tired than usual, and your body is probably just starting to feel a little wonky, but hopefully you’re not in the thick of it quite yet. If your symptoms are severe, there’s never any harm in calling your doctor to check in (and possibly check for multiples!).

Product Recommendations for Your First Trimester

How to Get That Mom-to-Be Glow

Your Guide to Natural Beauty Products in Pregnancy

How to Go Green During Your Pregnancy

Makeup Ingredients to Avoid During Pregnancy

Your Pregnant Belly at 5 Weeks

At 5 weeks pregnant, your belly may look unchanged—or you may be a bit bloated or feel like you’ve already gained a pound. Heck, you might feel so sick that you can’t eat and worry you could have lost a pound. All those scenarios are considered perfectly normal and totally okay! All pregnant women are different and how their bodies change throughout pregnancy varies widely.

You’re probably starting to wonder a bit about overall pregnancy weight gain. The short answer is: You don’t need to worry too much about it yet. Doctors only recommend gaining a few pounds (1 to 5 to be exact) during the first trimester (which ends after week 13), and that will probably happen without you thinking too much about it.

The long answer is that you will need to gain weight during your pregnancy.

Your doctor will discuss personalized weight gain recommendations with you, since they vary based on body type. Here’s what the American College of Obstetricians and Gynecologists (ACOG) recommends:

If you’re underweight (BMI under 18.5): Your recommended total pregnancy weight gain is 28 to 40 pounds.
In the second and third trimesters, aim to gain about a pound (1 to 1.3 pounds to be exact) per week.

If you’re 5 weeks pregnant with twins (and starting at a normal BMI):

Wondering if you could be 5 weeks pregnant with twins? If you were, you probably wouldn’t know it yet, though as we mentioned above, some twin moms swear they had worse morning sickness. They also may gain weight more rapidly and “start to show” earlier than women having one baby would.

Five weeks pregnant is a good time to ask your partner for a massage. You might not have a big bump, but at five weeks pregnant, your body is working fast and furiously to grow baby, so you deserve a little TLC, right?

Should I see a doctor at 5 weeks pregnant?

Unless you have any reason to believe there’s a problem with your pregnancy, there’s no real reason to see your doctor quite yet. The first prenatal appointment often takes place around week 8 or 9. But while you may need to wait a little bit longer to have your pregnancy officially confirmed, now is the time to call and schedule that first visit and ultrasound. If you have any concerns, share them when you call so you can get in to see your doctor when you need to.

"Most OB providers will see you around 8 to 10 weeks of gestation, unless you’re particularly high risk. But don’t call at 8 weeks expecting to get in the next day; do your homework early and make sure the office takes your insurance, delivers at the hospital you like and check out with friends about their philosophies." - Heather Bartos, MD, an ob-gyn and medical director of Be. Women’s Health & Wellness in Frisco, Texas.

You’re at the very start of this long and exciting journey. Here’s what to keep in mind as you get your footing.

Now that you know you’re pregnant, there are certain foods you’ll have to put aside. As annoying as it is, some foods pose a safety concern for you and baby. Until your child is born, hold off on alcohol, raw dough and batter, raw or undercooked meat, hot dogs and cold cuts, paté and other refrigerated meat spreads, raw and undercooked seafood and eggs (including eggs with runny yolks and cured fish like lox), fish known for having high mercury levels, unwashed fruits and veggies, raw bean sprouts and any cheese, milk or juice that’s unpasteurized.

The effects of too much caffeine on baby are unknown, so it’s smart to cut back on your habit. As exhausted as you probably are right now, limit yourself to less than 200 milligrams of caffeine per day—or about two small cups of coffee or less. If you’re a tea drinker, the same general rules apply.

If you’re a smoker, stop smoking right away as it’s harmful to baby. If you are around people who smoke frequently, ask them to stay a significant distance away when they smoke so you’re not inhaling secondhand smoke (and so the smell of the smoke doesn’t make you nauseous!).

Pass on the litter box

You are officially off the hook for cleaning the litter box, as there’s the potential for contracting an infection called toxoplasmosis, which could harm baby. Oh darn. Enjoy passing this unpleasant task (that could make you heave anyway) off to someone else! It’s a good idea to avoid uncovered sandboxes and gardening without gloves too, since outdoor cats often use garden beds and sandboxes as their own personal toilets.