Think you’re 2 weeks pregnant? You might not be. Here’s why.

Most OBs count pregnancy starting from the first day of your last menstrual period (LMP). Yep, that’s a week or two before you even get pregnant. We know it sounds totally weird, but it’s more accurate for doctors to estimate a due date this way.

So if you think you conceived about two weeks ago, you’re probably at least four weeks pregnant—maybe even five. We give you permission to skip ahead to week four.

If you really are in the second week of your cycle and are trying to conceive, we’ve got some advice right here for you.

At 2 weeks pregnant, symptoms of ovulation can clue you in on the best time to have sex and hopefully conceive a baby. You’re probably ovulating if you notice these signs at week 2 of pregnancy:

Some women buy an ovulation test to help them figure out when they might be most fertile. A low-tech strategy is to have sex every other day from about day 12 to day 16 of your menstrual cycle—meaning toward the end of the second week to the beginning of the third.

If you do conceive at 2 weeks pregnant, symptoms won’t appear right away. In fact, you won’t be able to find out for sure you’re if pregnant until there’s enough pregnancy hormones in your system for a home pregnancy test to detect. That should happen at about week 4, which is the same time you’ll probably miss your period. Around this time, those hormone levels are finally high enough that they give you some noticeable pregnancy symptoms. Some women swear they do start noticing early pregnancy signs before week 4 though; these are the ones that could clue you in: 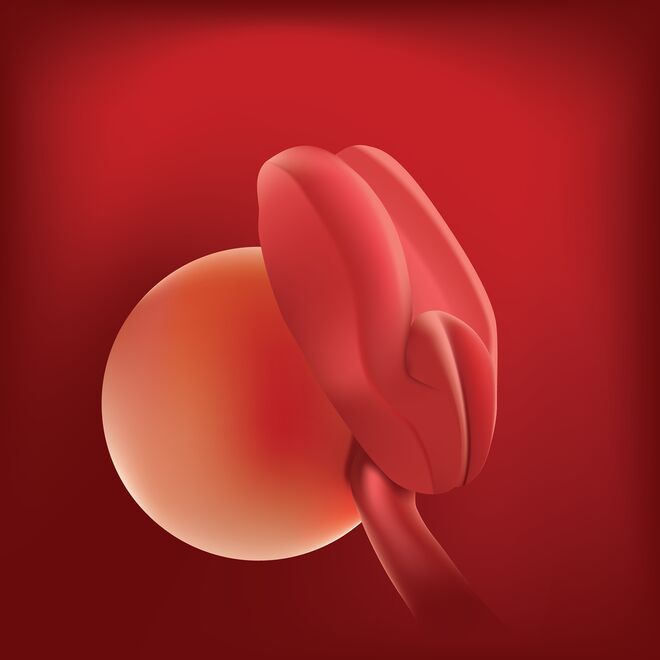 You probably won’t have a 2 weeks pregnant ultrasound. If you could see inside your 2 weeks pregnant belly at the time of ovulation, it’d go a little something like this: First your ovary releases an egg (smaller than a fleck of ground pepper) into your fallopian tube, where it must be fertilized within 12 to 24 hours. If you’ve had sex within the last six days, there could still be sperm living inside you, and one of those could fertilize the egg. Otherwise, you’ll have to have sex stat to get pregnant.