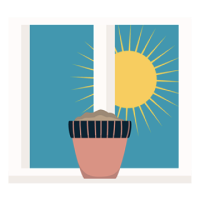 Sperm met egg last week, and voila—you've made a baby! It’s so early that when you’re 3 weeks pregnant, you may have no idea that you’re actually pregnant. Conception just happened a few days ago, and there probably hasn't been time for you to miss a period yet at week 3 of pregnancy.

Your now-fertilized egg (yay!) is on a journey through a fallopian tube, dividing and re-dividing into identical cells on its way to your uterus.

At 3 weeks pregnant, an ultrasound may not detect your soon-to-be-baby. That super-teeny fertilized egg (called a morula) is smaller than a grain of salt and is on the move, but as early as week 4 your doctor may be able to see your uterine lining get thicker, a sign that the little morula has reached their destination for the rest of pregnancy (you guessed it: your uterus).

When you’re 3 weeks pregnant, symptoms may not have appeared yet. That’s because most early pregnancy symptoms are caused by pregnancy hormones, and you probably don’t have a very high level of those in your body yet. (Oh, but you’ll get there!) Some signs of pregnancy at 3 weeks—and the few weeks following—are:

If your little soon-to-be-embryo has already made it to their new home, you may see a bit of spotting as the fertilized egg burrows into the lining of your uterus.

As the pregnancy hormone hCG begins to make its way through your newly pregnant body, you may notice some feelings of queasiness—or nausea so bad it makes you puke. Morning sickness should really be called all-day sickness since it doesn’t discriminate by time of day. If you’re feeling this symptom of pregnancy at this point, you may be further along than you thought. (Or you may even be 3 weeks pregnant with twins! That’s because twin moms-to-be often have higher levels of pregnancy hormones and therefore worse nausea.)

Your breasts can start to get sore and your nipples may darken as your body starts prepping to make milk.

If your cycle is typically shorter than 28 days, you may realize toward the end of this week that you could be pregnant. The only way to know for sure is to take a pregnancy test.

Check the box of your home pregnancy test to see how accurate its results are before your missed period. Most are over 99 percent accurate once you’ve missed it, and some brands promise to detect pregnancy hormones in your urine sooner than that. (For example, when you’re 3 weeks 5 days pregnant or even 3 weeks 4 days pregnant.) Here’s the thing: The amount of pregnancy hormone hCG in your body might not be enough for the test to detect right away—but it doubles every 48 hours. If you get a negative result, follow up a few days and then a week later with another pregnancy test and then another, to be sure it wasn’t just too early to tell.

In some cases—like if you’re at risk for miscarriage or ectopic pregnancy—your doctor may ask you to come into the office for a blood draw. Blood tests can detect smaller amounts of hCG than urine tests can, so you may find out that you’re pregnant sooner with a blood test than you would with an at-home test.

Can you tell you’re pregnant at 3 weeks?

While some people feel no difference at all at this early stage, others may start to notice 3 weeks pregnant symptoms. The experience at 3 weeks pregnant can really vary, so don’t fret if you don’t feel anything out of the ordinary. However, if you feel nauseous and your breasts are sore, that’s normal too. Everything changes quickly in early pregnancy, so no matter how you feel, be prepared to feel different in a week!

Product Recommendations for Your First Trimester

How to Get That Mom-to-Be Glow

Your Guide to Natural Beauty Products in Pregnancy

How to Go Green During Your Pregnancy

Makeup Ingredients to Avoid During Pregnancy

Your Pregnant Belly at 3 Weeks

You may be excited to start noticing something different about your appearance, but at 3 weeks pregnant, a belly isn’t really a thing. Though you may feel a bit bloated, most pregnant women don’t start to show until around week 12 or later, so you’ve got quite a way to go before you actually look pregnant.

Before you start eating for two, know that doctors only recommend most women gain one to five pounds total in the first trimester—that’s the first 13 weeks. So you definitely don’t have license to start majorly indulging at this point. In fact, you shouldn’t really do anything different except try to eat a healthy, well-rounded diet and take a daily prenatal vitamin with at least 400 micrograms of folic acid in it. Doctors don’t recommend increasing your daily calorie intake until the second trimester. Once you hit week 14, you’ll want to add about 300 (healthy) calories per day.

How many weeks are you at implantation?

Implantation occurs soon, at about 4 weeks pregnant. For implantation to happen, the cells in the fertilized egg, now a morula, will continue to divide until it becomes a blastocyst. About five to eight days after fertilization, the blastocyst will have arrived, where it will begin to implant in the wall of the uterus. What a journey!

“Pregnancy tests have come a long way and can even detect pregnancy before you’ve missed your period—that can work for you and also against you. For the truest result, I would recommend testing a few days after you’ve missed your period, and with first morning urine. If negative and still no period, repeat this process every two to three days—always first thing in the morning.” - Heather Bartos, MD, an ob-gyn and medical director of Be. Women’s Health & Wellness in Frisco, Texas.

Trying to conceive can be daunting, and perpetually wondering if you’re expecting can further cause stress. Here’s what you can do to prioritize your physical and mental health.

First things first: You’re probably chomping at the bit to officially find out that you’re pregnant, but be patient. A pregnancy test might not be able to detect a pregnancy just yet. Wait until the test you’ve purchased says it can detect a pregnancy—probably at the end of the week. Once you start testing, if you get a negative result, feel free to keep testing every couple days until you get your period.

When it’s time to take the pregnancy test at the end of the week, take it first thing in the morning. Your first morning pee is the most concentrated, making it the most likely to have a high enough concentration of hCG for the test to detect. Follow the directions exactly for the most accurate results.

Continue taking care of yourself

You should still be taking your prenatal vitamins every day, drinking plenty of water and eating healthy, balanced meals. Continue to get regular moderate exercise and practice self-care.

Focus on foods that are high in calcium and iron to help support the extra blood your body is making. If you’re nauseous or vomiting, try making ginger tea, drinking some clear broth or eating a banana (yay, potassium!). Even ice cream can be a good compromise when you’re struggling to eat but still need protein and calcium. Make it a banana split with a few nuts and you’re covering your bases pretty well!