Hint: The color of your pregnancy discharge can tell you a lot about what’s going on in your body.
facebook
twitter
copy link
email
save
ByAnna Davies
Contributing Writer
Updated May 24, 2021

When you become pregnant, you of course expect your body to change—but you probably never considered how pregnancy would affect your vaginal discharge. Surprise!

Even immediately after conception, the consistency, color and odor of your pregnancy discharge is likely to change due to hormone fluctuation. And if you’re not up to speed on those changes, things can sometimes look strange or feel pretty wet down there. Right off the bat, you may find yourself with questions about your early pregnancy discharge—like, should my discharge look that color? Is this smell normal? And when should I be concerned?

Knowing what to expect is important, which is why we’ve talked to experts to get the lowdown on what’s normal vaginal discharge during pregnancy, what your vaginal discharge color might mean (and trust us, there’s a rainbow of possible discharge colors) and when you should call your doctor. Follow our guide to find out everything you need to know about pregnancy discharge.

Before we dive into the different types (and colors) of pregnancy discharge you may experience, let’s first address leukorrhea. Leukorrhea is the medical term for the normal discharge you can expect to see in the early stages of your pregnancy. You might see white-ish clear, mild-smelling vaginal discharge, which can be evident within the first weeks of conception, says Nicolle S. Underwood, MD, an obstetrician at Pacific Women’s Healthcare Associates in Irvine, California. In this phase of your pregnancy, your body is experiencing higher levels of estrogen that increase blood flow to your pelvis, which in turn triggers the mucous membranes to ramp up production, leading to more discharge than you may be used to. That white pregnancy discharge can take some women by surprise, rest assured, it’s totally normal vaginal discharge during pregnancy.

What is the purpose of leukorrhea?

While it may seem like a nuisance at times, leukorrhea actually serves several purposes during the course of your pregnancy. This early pregnancy discharge helps protect your birth canal from infection and helps maintain a healthy level of bacteria. Leukorrhea also helps flush out dead cells from the vagina.

What Is Normal Vaginal Discharge During Pregnancy?

We’ve established that your discharge will likely change when you’re expecting—so what does pregnancy discharge look like? You will likely see what we just referred to as leukorrhea.

Also, don’t be alarmed; there also tends to be more discharge during pregnancy due to the extra hormones circulating, such as estrogen and progesterone. Estrogen can thin out your pregnancy discharge, while progesterone thickens it, explains Kimberly Langdon, MD, an obstetrician and medical advisor for digital health company Medzino. Plus, the glands of the endocervix (the opening to the uterus) produce more mucus during pregnancy (which, fun fact, results in the mucus plug).

On top of all that, as pregnancy progresses, your full uterus can get in the way of your bladder completely emptying, making it possible for small urine leaks as well, which can add to the feeling of wetness down there. You also may find that your pregnancy discharge smells different than usual, which is also due to—you guessed it—hormonal fluctuations. Is this normal? Yes!

Your discharge may get thicker and stickier during late pregnancy, and it’s not uncommon to see mucus (which may be clear or red-tinged) during the last few weeks of your pregnancy. This is your mucus plug—aka the clump of mucus that helps keep the opening of the cervix closed. You can lose parts or all of your mucus plug, typically after 37 weeks. It can be a sign that labor is on its way, but it’s by no means a guarantee. If you lose it before 37 weeks, give your doctor a call, as it can be a potential sign of preterm labor.

What Your Vaginal Discharge Color Means During Pregnancy

What if your pregnancy discharge color isn’t white or clear? It doesn’t mean anything is wrong. For example, you may also see some spotting in the week following conception. Called implantation bleeding, this is due to the fertilized egg attaching itself to the uterus. While slight spotting throughout pregnancy—think: a few specks of blood on your underwear or a streak when you wipe—isn’t atypical, it’s something an obstetrician would want to discuss and monitor, says Underwood, so let your doctor know if you see any blood.

Here’s a full rundown of the vaginal discharge colors that may make an appearance in your underwear during pregnancy:

More commonly referred to as leukorrhea, this early pregnancy discharge is made of cervical and vaginal secretions and is normal. It can show up almost immediately after conception and may continue throughout the pregnancy.

During late pregnancy, this discharge is likely part of the mucus plug. This may come out all at once (think: a tablespoon of a jelly-like substance) or may come out in bits and pieces during the last weeks of pregnancy.

Leukorrhea can also have a whitish hue (like the color of skim milk). If the white vaginal discharge is clumpy and accompanied by itching or burning, however, you may have a yeast infection. Yeast infections are common during pregnancy due to hormonal shifts and a changing pH in the vagina. It’s a good idea to check in with your doctor before treating yourself; while your doctor may suggest an over-the-counter treatment, it’s important to rule out any other issues.

Vaginal discharge color resembling the hue of creamy coffee could also signify a yeast infection. The discharge may also be clumpy and have an unusual odor, Underwood says.

Dark brown discharge during pregnancy could be dried blood leaving your body, Underwood explains. A few streaks when you wipe may be normal—especially if the brown is a jelly-like consistency, which could be part of your mucus plug—but more than a few streaks should be discussed with your doctor.

Green, foul-smelling pregnancy discharge could be a sign of an infection like chlamydia or trichomoniasis, Langdon says. This may be accompanied by itching or burning.

Yellow discharge during pregnancy could also be a sign of an infection. Keep in mind, an occasional splotch of yellowish discharge on a panty liner or underwear could simply be dried urine and is nothing to worry about.

Pink or pink-streaked discharge signifies blood. It doesn’t necessarily indicate anything is wrong, but it’s a good idea to discuss with your doctor right away to determine the cause of the spotting.

While heavy bleeding or discharge containing clots may be a sign of miscarriage, smaller amounts of blood—more than a few specks or streaks—also warrant medical attention. Any persistent spotting or heavier bleeding in early pregnancy should be evaluated by your doctor with an exam and an ultrasound. “Bleeding in the first trimester does not mean that you’ll inevitably have a miscarriage,” Langdon says. Instead, it could be a sign of an infection or could indicate an issue like placenta previa, where the placenta lies over the cervix. This isn’t an emergency, but it does require monitoring. 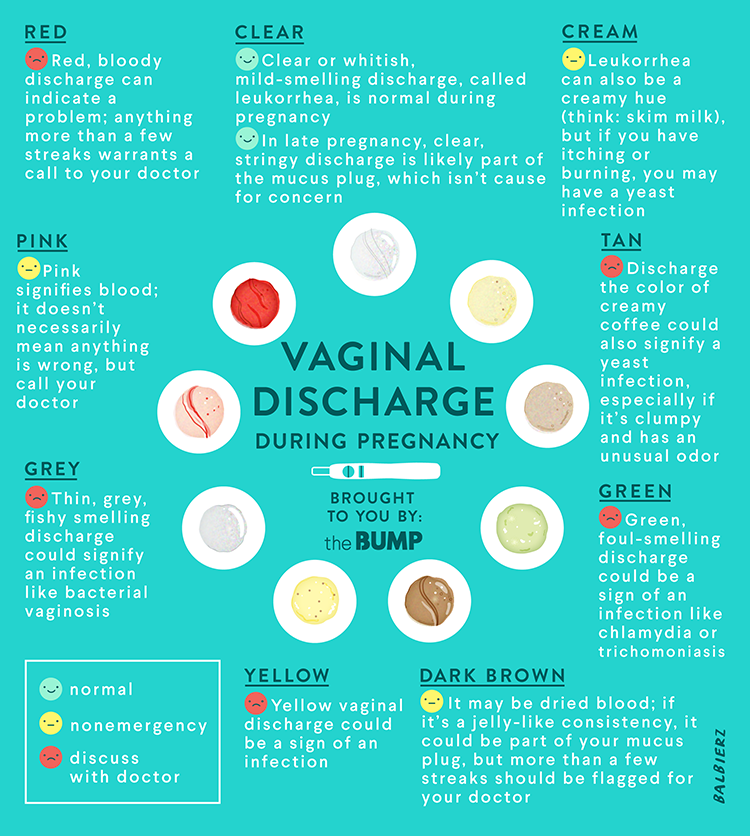 How to Deal With Pregnancy Discharge

There’s really no way to reduce discharge during pregnancy—but you wouldn’t want to, anyway. It’s your body’s natural way of expelling bacteria that could harm both you and baby. The best way to deal with pregnancy discharge is to keep the area dry and clean.

Wearing cotton underwear and a pantyliner or changing underwear once a day can keep you feeling fresh and can also make it easier to monitor anything amiss. If you have heavy discharge, you can always use a pad for extra protection. However, steer clear of tampons and douches, Underwood warns, as putting anything in the vagina during pregnancy could increase your risk of infection. You also don’t need to use any wipes; remember, your vagina naturally cleans itself. Plus, wipes can also potentially change the pH levels in your genital tract and lead to infection.

If you’re ever nervous about your vaginal discharge during pregnancy, don’t hesitate to call your doctor, who’ll want to hear if anything is unusual for you, especially if the discharge is accompanied by pain, itching or burning. “We talk about this all day, so if you have any questions, we want to know,” Underwood says.

If you begin experiencing any of the following signs or symptoms related to your pregnancy discharge, contact your doctor:

Note that intercourse can change the consistency of your vaginal discharge during pregnancy. Keeping track of when those changes happen—for example, seeing a few streaks of pink discharge after having sex—can help you monitor your pregnancy discharge and give your doctor a heads up about any concerning patterns you may notice.

During later pregnancy, if you’re experiencing significant dampness, it could potentially signal an amniotic rupture that needs immediate attention. Since amniotic fluid is clear and odorless, it can be hard to discern from typical pregnancy discharge. One way to assess: Put on a new pair of underpants or a new pantyliner for an hour. If you’re noticeably damp or wet after an hour, Underwood says, it may be a good idea to call your doctor.

You’re going to notice a lot of changes in your body during the course of your pregnancy, and some of those may show up in your discharge. While leukorrhea is totally normal, it’s important to keep an eye on your discharge as it can tell you a lot about what your body is going through—maybe you notice signs of your mucus plug, which means baby is on the way, or perhaps you discover symptoms of an infection. The more you familiarize yourself with what’s happening below, the more in tune you will be with your body and baby.

Kimberly Langdon, MD, is an obstetrician and medical advisor for digital health company Medzino. She earned her medical degree from The Ohio State University College of Medicine in 1991.

What You Need to Know About Sex During Pregnancy